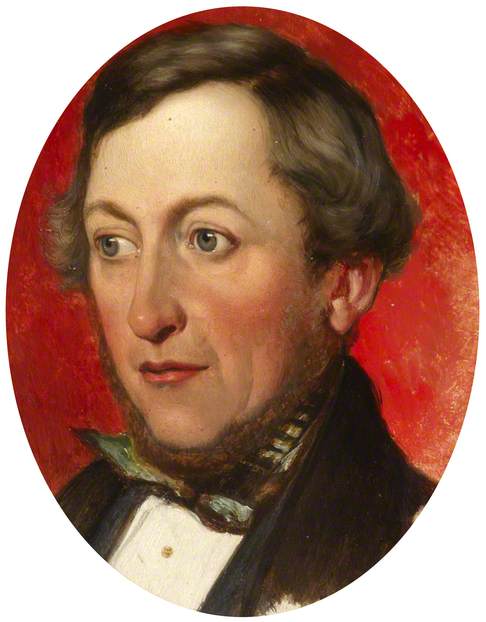 Compare for instance the portrait of Mrs Coventry Patmore in the Fitzwilliam Museum. https://bit.ly/3fCa4wU

A Thomas Garnett (1766–1802), who was Physician to the Marylebone Dispensary until his death might be this young man's grandfather. The life of the librarian Richard Garnett (1835–1906) [in the British Museum] might be worth looking at, as Millais painted a portrait later of his journalist brother Jeremiah. There is a considerable literature on nineteenth-century members of this Garnett family.

The collection has commented, 'The three portraits are in fact mounted together, see attached. See also four other label attachments. Possibly they share a connection to St Marylebone. I will look in the parish vestry minutes for any clues. We welcome a discussion.'

Some initial thoughts. Were these three portraits cut down from individual portraits or a group portrait? Are the dimensions accurate? They seem too large.

Where did the 1849 date beneath two of the portraits as mounted come from? ‘Board’ is a vague description for the supports.

Photos of the reverses of these three portraits may supply some of the answers to these questions.

As to the artist, not by John Everett Millais. Nor, I think by John Partridge, who crossed my mind.

Likely enough that the portraits are documented in the records inherited by the City of Westminster from the Borough of St Marylebone. But where to start?

All three portraits are evidently by the same hand.

The signature under this portrait appears to be Thomas E. Garnett.

Thomas Garnett the physician and natural philosopher had two daughters, but apparently no sons, so his grandchildren, if any, would most likely not carry the Garnett surname.

John Partridge is very likely, he likes to splash on the red.
Could Etty also be a condenter?

Etty had retired in October 1848 from London to York, where he died in November 1849. This would preclude him from painting a portrait of a London sitter in 1849 (assuming the date given for the present work is correct).

Edward Joseph was a surgeon who lived at 15 Great Marylebone Street, London. Please see footnote 4 on the letter to “Mr. Joseph” from the writer Charles Dickens dated February 17, 1851, which states that he was “Surgeon to St. Marylebone Central Scools”.

According to the 1851 Census on Ancestry, Edward Joseph, living at 15 Great Marylebone Street, London, with his wife, children and servants, was 46 years old and born in Montgomeryshire, Wales.

This is the same shape as the Pre-Raphaelite portraits made of each other for Thomas Woolner in 1853, who was emigrating. They were approximately 30 x 22 cms. It doesn't look good enough for Millais, although it is extremely competent. The Millais expert is Malcolm Warner: warner4911@gmail.com.

Frankly, I had no evidence for the 1849 date when I proposed this and wondered if these might be a little eariier and be three of the many missing early works by Millais painted for very little money commissioned by the London based lawyer and defender of Chartists, Sergeant Thomas - and the evident weaknesses being explicable if they were by a very young artist before he started exhibiting

Peter, thank you for the email address. I will email Malcolm now and ask if he would be kind enough to give us his thoughts from the material presented on this thread. David

One possibility for the sitter is Thomas Edwards Garnett. Probate records show that he died on February 21, 1859. He lived at 38 Wigmore Street in the County of Middlesex. He was described as an “oilman” with effects under £4,000. That record shows that he was married to Charlotte Garnett. I have ordered the probate record.

According to the 1841 Census on Ancestry, Thomas and Charlotte lived in the Borough of St. Marylebone, Parish of St. Pancras (Thomas aged 40 and Charlotte aged 25). He was described as a “Coal M**” [Maker?]. She later appeared as a widow in the 1861 Census (age 46), living with a servant in Hammersmith.

Malcolm Warner has commented: 'Those three portraits are very good, and I don’t think Millais would be offended by anyone thinking they might be by him. On the other hand, I’m afraid I don’t. The technique is a bit too smooth for him in 1849, especially in the painting of the complexions. If there were a signature or old label connecting him to the portraits, I might be swayed. But the style isn’t enough by itself—there are just too many artists at that time who could have done them. The red background to the one of Thomas Garnett seems very distinctive—whoever the artist was, I bet that background was a favorite device—but I’m afraid I don’t have any suggestions. You only have to look at the ‘Drawings and Miniatures’ section of the Royal Academy catalogues to see how many long-forgotten artists there were doing small portraits like these. By the way, I gave that a try, looking at that part of the RA catalogue of 1850, but there weren’t portraits of any of these three chaps, alas.'

Since the three portraits are by the same hand, I have been comparing each of them to works by Millais from about 1850. I thought you might be interested in this comparison (attached) of the portrait of Robert Scace https://tinyurl.com/t7hftfnf with “Wilkie Collins” by Millais https://tinyurl.com/4udstbsr. Note the write-up to the Millais painting states how it was painted in 1850 but submitted by an unnamed person to the Trustees of the National Portrait Gallery in 1894. The two works could almost depict the same man, except for the prominent forehead in the portrait of Wilkie Collins. However, in support of Malcolm Warner’s view above, the painting technique is quite markedly different.

The first clear newspaper reference to Scace in his role as the St. Marylebone Surveyor appears in the Morning Chronicle of the 1st January 1830.

Emily Scace died in Marylebone in December 1845, and, from her address at Townsend Road in that parish, was buried, "aged 36", on the 2nd January 1846.

By the 1861 Census, Robert Scace, Surveyor, a widower, aged 60, was living at the modest though elegant 27, Grove Road, St. John's Wood, along with his daughter Mary, aged 18, and an eighteen year old house servant, Mary Wooton.

"Died on the 8th inst., in the 67th year of his age, Robert Scace, late of No. 27, Grove Road, St. John's Wood, for nearly forty years the Chief Surveyor of the parish of St. Marylebone."

The same newspaper, of Saturday 20th October 1866, published the attached advertisement concerning the erection of a monument in Scace's memory, to be located at Finchely cemetery.

If the dating of this portrait is accurate, it shows Scace when he was aged 48.

A couple of small details to add to Kieran’s research:

Although the 1841 UK Census lists Robert as being born in Noyle, I googled Noyle and it was corrected to Knoyle.

This discussion was launched just two days ago so we cannot expect the collection to have checked the St Marylebone vestry minutes yet, as promised at the outset of the discussion. But when such a check is made, the focus should be on 1849 and perhaps the preceding year to see if the commissioning or unveiling of these portraits is recorded.

Probably the same Thomas Garnett was also actively involved in the Marylebone Literary & Scientific Institution, which concerned itself with art and music as well as the L&S (https://bit.ly/2VHdC9K). Their premises and lecture hall were no more than three or four minutes' walk along what is now all Wigmore Street from his home and business at no. 38, close to the junction with Marylebone Lane. Contemporary directories show him trading as both a grocer and an oil & colourman as well as those previously mentioned. Interestingly oil & colourmen often supplied oil paints to artists as a sideline; however, he does not appear in Jacob's NPG list of British artists’ suppliers ( https://bit.ly/2U3c8Xd ), and it's probably a red herring.

I've not come across evidence that Garnett supplied paint or other materials to artists, which is why he is not in the NPG listing. But I'm open to new information.

The will of Thomas Edwards Garnett, written on January 24, 1859, does not contain any names of artists. The first bequest was to Martha Bristoe, "who formerly lived with us as servant". He also made bequests to his wife Charlotte, his "dear friend" Alfred Bainbridge David Esq. and his "kindest and dearest friend" Frederick Horatio Bridgman Esq. Frederick appears on the 1851 Census living at 10 Wigmore Street - he was a confectioner employing 15 men. Thomas also made financial provisions for Martha's son "Thomas Edward Garnett Briscoe known as Thomas Edward Browne" who “is now at school with Mr. Cooper, Wimberley House, Fulham” and not yet 21. It seems that Thomas Garnett had originally intended to include bequests to various institutions but directed that the list be cut out of his will one week before he died. Witnesses were Emma Wollett and Jane Fenn.

BTW. I was watching Inspector Alleyn on TV last night.On the wall in the corridor of the country house there was a VERY similar painting. I freeze framed,got my handheld device out-called up art detective and compared the two paintings. Both Oval.Both red ochre background.Both faces VERY similar-though the one on TV looking the other way-and differences in clothing below the chin. Unfortunately I cannot discover which real country house it was filmed at.

I think that the way forward lies with the collection. As I put it two months ago, "This discussion was launched just two days ago so we cannot expect the collection to have checked the St Marylebone vestry minutes yet, as promised at the outset of the discussion. But when such a check is made, the focus should be on 1849 and perhaps the preceding year to see if the commissioning or unveiling of these portraits is recorded."

But this was two months ago.

His son Henry Hall Pickersgill (1812-1861) was also an artist. Here is a link to one of his works from c. 1843-1850 ‘A Circassian Girl’. https://tinyurl.com/3ehmdxvu. Notice the striped yellow-and-black fabric and the bright cherry red in each work. I have attached a composite based on the portrait ‘Thomas Garnett’.

Another suggestion is London-based artist John Prescott Knight (1803-1881). His ‘Portrait of a Lady’, c. 1839 is on Pinterest. https://tinyurl.com/mfcxneck. Like the portrait ‘Edward Joseph’, there is a bright cherry red background on one side of the sitter and a darker red background on the other side. The bow tie in his work ‘John Henry Robinson (1796-1871)’ is quite similar to the bow tie in the portrait ‘Edward Joseph’. https://tinyurl.com/2bbm6btn. I have attached composites.