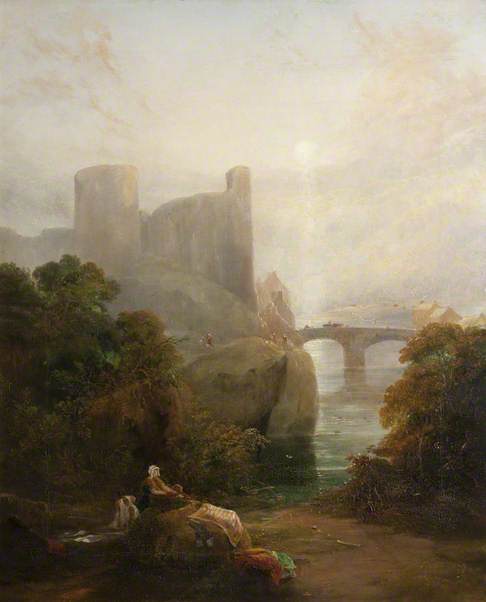 I suggest that the castle remains shown in this painting are not a romantic invention, but depict Barnard Castle. The position of the round tower in relation to the other remains and the nearby bridge are very similar to the situation at Barnard Castle, and bear comparison with the location shown in ‘A Relic of Old Times (Barnard Castle, County Durham from the River)’ by Thomas Creswick. https://bbc.in/2Dfkd06

Are there any other suggestions for a location?

This discussion is now closed. This has been identified as a view of Barnard Castle. The little building variously described as a tower or chapel, seen on the central pier of the bridge in earlier views, disappeared between 1827 and 1833. This discussion’s painting can therefore be dated to the late 1820s at the earliest.

I agree that it looks like the same castle and bridge as shown in the picture by Thomas Creswick.

I agree this looks very much like Barnard Castle. I live up the road in Durham and cross this bridge quite often. The tower, the walls, the footpath around the tower and the bridge are correct. Turner's picture has some embellishments but then he often did enlarge on nature, see his alpine-like depiction of the river at Tynemouth.

My son, Christopher Moule (Head of History at Marlborough College) confirms that this is indeed Barnard Castle and sent this link:

showing a picture to compare.

The article linked to here might be of interest:

I too have little doubt that this is of, or at least based on, Barnard Castle. The image is simplified and romanticised, but there are too many similarities to be coincidental.

With a consensus of seven different people I am happy to recommend that this can indeed be identified as Barnard Castle. The little tower on the central pier of the bridge seen in earlier views seems to have disappeared towards the mid-19th century so this view can be probably dated to then or shortly afterwards. Stylistically I don't think it can be much later in the century.

Andrew, the little tower that you mention is recorded as being the chapel, and elsewhere as the house, wherein the Bible clerk Cuthbert Hilton allegedly lived in the mid-seventeen hundreds, and within which he, as a bogus cleric, conducted marriage ceremonies that took advantages of a loophole in the territorial marriage laws. Placing a broomstick on the point of the border, in the middle of the river, between the County Palatine of Durham and Yorkshire, "where the Lord Bishop's writ does not run", he would have a couple leap over it, while he recited an old witching rhyme to the effect of

'My blessing on your pates
And your groats in my purse
You are never the better
And I am never the worse'.

By their simple leap over the broomstick, the couple were married. Turner painted the bridge in the late 1820s, though he had visited the spot in 1797 and again in 1816. Sketches of his at the Tate show the bridge without the chapel, but his watercolour, in the collection of the Yale Centre for British Art, shows the structure:

The 1827 engraving of the artist's work, as it appeared in 'Picturesque Views in England and Wales', also shows it: