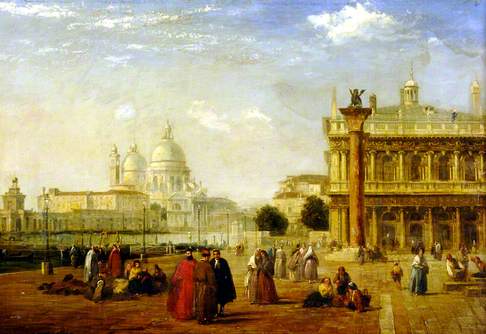 ‘The work was bequeathed in 1963 to the Southampton City Art Gallery from a private collection as a work by an unknown artist without any supporting information.’

This painting is now titled 'Venice: A View from the Molo Looking towards Santa Maria della Salute and the Dogana'. It is attributed to Edward Pritchett (active c.1828–1879). These amendments will appear on Art UK in due course.

Thank you to all who contributed to this discussion. Please see below for all the comments that led to this conclusion.

'In the circle of' is an expression that always makes me feel wary when art dealers use it.

A pleasing composition immediately suggesting at least the strong influence of Edward Pritchett (fl 1828-64). The subject matter and palette (especially the sky) strengthen this opinion. The handling of the figures and buildings also suggest Pritchett. Let us now consider the alternatives - Arthur Joseph Meadows 1843-1907, William Meadows (fl 1870-95) and perhaps William Wyld 1806-89. In my opinion Wyld could be a possibility. I have owned two small Venetian views (oil on panel) by this artist mainly known for his watercolours. The palette used is similar as are the figures, however he either signs or his name appears say on the side of a boat for example. As regards either of the Meadows, somehow I feel that it is unlikely that they are the artist in this case owing to the handling of the paint and figure construction. Again I have also owned a Pritchett of similar bright cheerful colouring (rather than his rather brown effect period). What troubles me however, is that I would have expected it to have been signed. I maybe quite wrong, but am inclined to support the Edward Pritchett camp and feel that should the picture be stripped of discoloured varnish it will strengthen this argument.

There are a raft of similar Pritchett Venice views on the web, including of the Piazzetta looking towards Santa Maria della Salute, as here, and the figure groupings are very similar. And what are the nameable alternatives? The Wyld comparisons on Art UK suggest not him, or Pollentine or George Stanfield or their betters (like Cooke). An attribution to Pritchett (rather than 'unknown') would be reasonable and I'm sure- at least for auction purposes- that is what it would probably get. The title could certainly be improved, as indicated.

It is certainly a Pritchett type view, composition and figure groupings, but, as usual with Art UK, the image quality does not allow for strong attributions to be made on the basis of style. 'Attributed to Pritchett' or 'Style of Pritchett' would be better then 'Unknown', I agree, as would be a more precise title, as Pieter suggests.

Interesting comments. Yes, in my opinion Pritchett is still the most probable author, however let us not forget Richard Parkes Bonington (1802-28) whose Venice works inspired Pritchett. In addition I would like to introduce James Holland (1799-1870) into the mix before a final decision is made. Both of these artists produced works of similar palette, subject matter, handling of buildings to distance and again, executed figures and groupings of the distinctive style of Pritchett. As mentioned previously, I normally expect to see a signature on a Pritchett, but this is not always the case, however it may well be that those unsigned have been incorrectly attributed in the past.

The view is actually taken from the Molo, the waterfront area between the Piazzetta di San Marco (which opens on the right of the picture) and the Bacino di San Marco (implied to the left). As a more precise title I suggest something like 'Venice: A View from the Molo looking towards Santa Maria della Salute and the Dogana' or more fully '…looking across the Entrance to the Grand Canal to the Dogana and Santa Maria della Salute'. On the right we see Sansovino's library -- the Biblioteca Marciana -- and in front of it one of the two giant granite columns which mark the entrance to the Piazzetta. This column bears a bronze statue of the winged lion of St Mark, as shown. Curiously, it almost completely hides the second, westerly, column bearing a stone statue of St Theodore (former patron saint of Venice) with his crocodile: just part of its capital is visible.

Edward Pritchett certainly favoured this and very similar vantage points for painting views of Venice. Although he was not alone in so doing, I agree with others that there is enough evidence in terms of subject matter, composition, staffage, colouring and overall style to justify proposing, at least provisionally, 'Attributed to Edward Pritchett' as the artist heading.

It's important to note that, according to Art UK’s full record, the 'private collection' from which this picture went to Southampton was actually that of the distinguished gallerist (and collector) Arthur Tilden Jeffress (1905-1961). In the years following the Second World War he was co-director (with Erica Brausen) of the Hanover Gallery and later ran his own gallery called Arthur Jeffress (Pictures), both in London's West End. The view of Venice would thus be one of the 99 works he bequeathed to Southampton AG, which included his own portrait by Graham Sutherland; he also bequeathed two works to the Tate collection. This provenance is interesting in relation to the painting's subject because Jeffress loved Venice and had a house or flat there, also owning a gondola. It suggests too that the work is likely to be by an artist of some stature. Jeffress has not yet made the Oxford DNB but Gill Hedley is working on a biography of him and perhaps has knowledge of stock books and other such records relating to the two London galleries, through which this Venetian view might have passed. I'll try to contact her to see if she can throw any light on the matter.

Thanks Richard, for that expansion on Jeffress -who I've not encountered (and correcting my loose conflation of the Piazzetta and Molo): it also usefully raises where one would rate Pritchett, which is probably 'middling' as regards stature, at least compared to Bonington, Holland, Stanfield senior and Cooke, but better than Pollentine for example. Perhaps the collection could express a view of the 'attributed to' suggestion.

The paintings associated with Pritchett are by no means uniform in quality. Could this be a version of another painting by him , or even a copy? The subject was a popular one at this period.

True and either might be the case, but 'attributed to/ circle of/ style of' are all reasonable alternatives to 'unknown' depending on how much of a judgement call the collection may wish to make, and the title could usefully be improved. The choice is between going forward provisionally and partially or waiting for something else unlikely to turn up soon: if obvious, it probably already would have done.

I have been in touch with Gill Hedley (and apologise for my delay in reporting back). She does not have any information on this particular work but helpfully points out that since Southampton AG has copies of Jeffress’s will and of the stock list for his own gallery it is unlikely that an attribution has been lost since the time of Jeffress’s death. (She does not ‘think anything of this sort would have ever gone through the Hanover books’.) It follows from the above that although Jeffress was, in Gill’s words, ‘an enthusiastic attributor’ he apparently failed to come up with a good name for the picture’s authorship.

The problem with Pritchett is that the paintings associated with him vary not only in quality (as Martin has pointed out) but also in style. As far as I know, no one has studied him seriously and consequently there is no corpus of firmly accepted works which could provide the basis for a definitive comparison. Nonetheless, I agree with Pieter that 'attributed to/ circle of/ style of [EP]' are all reasonable alternatives to 'unknown'. I suggest that 'attributed to' would be the most appropriate since we do not know if Pritchett had a 'circle' of followers and 'style of' begs questions that cannot be answered for the reason mentioned above.

The past two months have not resulted in much change, so I agree with the consensus that 'Attributed to Edward Pritchett' would be an appropriate conclusion, and that the title should be changed to the more precise 'Venice: A View from the Molo looking towards Santa Maria della Salute and the Dogana'.

Title
Venice: A View from the Molo Looking towards Santa Maria della Salute and the Dogana