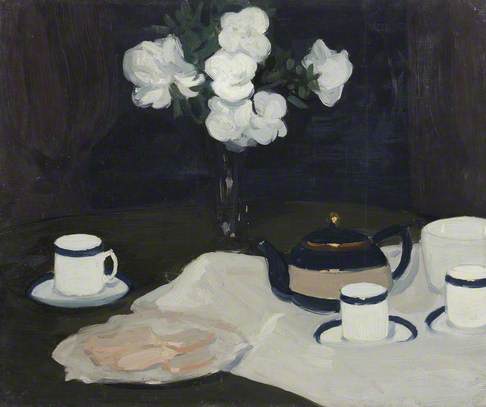 This is very reminiscent of one of the early still lifes by the Scottish Colourists, especially Fergusson or Peploe, and it should be investigated with that in mind. Its location in a Scottish collection is obviously suggestive. Compare with:

It certainly looks like a Fergusson - but given its owner which ought to know all about him, one should ask it directly why it has not been attributed to Fergusson , and also ask Roger Billcliffe who is working on a catalogue raisonne of Fergusson's paintings, who must know this painting well.
Roger is contactable through the website http://www.billcliffegallery.com
It is NOT a recent acquisition
The alternatives would be it is a copy, an imitation or even a fake

Peploe's grandson, Guy, will know the painting well too, and is the leading authority on Samuel. . He is in Edinburgh - but although Peploe's early 20th century still lives are in this mode, none of them is closer than the work under the discussion to known works by Fergusson

Judged by the slightly pedestrian drawing in the foreground objects, which to my eye would cast doubt on the painting being by Fergusson and Peploe, I think this is more likely to be a work by Edward Drummond Young (1876-1946) an Edinburgh artist who worked very much in this manner. He exhibited regularly at the RSA from 1908 until his death. He was also known as a portrait photographer.

I agree the manner recalls that of Fergusson and Peploe, but both pictures are clearly inferior to the work of either, and I would not say that about the picture under consideration, certainly not to the same degree.

Here is a still life, at the University of Aberdeen, by (or given to) J.D. Fergusson which includes a cup and saucer similar to those in the RSA painting (although the cup's handle seems to be broken):
https://www.artuk.org/discover/artworks/the-brass-kettle-104868/search/makers:john-duncan-fergusson-18741961/page/6

However, the rendering of the cups and saucers in the RSA painting is unassured, even crude, in comparison. Whoever painted it was struggling unsuccessfully with the perspectival representation of circular objects.

Peploe painted on a black background at one period - it is not by him. I have never seen a Fergusson looking like this. A good bet would be James Stuart Park, who painted extremely competent still lives like this, but once again I have not seen one on a black background. I ran Sotheby's sales in Scotland from 1972 -1984 and have seen a lot of Scottish works and own a Peploe.

My bet is on J S Park but you could also try William Sommerville Shanks.

Thanks, Peter. I agree that James Stuart Park is a good bet. The most accomplished aspect of the RSA canvas is the painting of the white flowers. Compare especially the following flower-piece, among a considerable number of such works by Park on Art UK with dark backgrounds:

Art UK records the artist as simply Stuart Park, although most if not all other reference to him include the name James -- but perhaps there is good reason for this omission.

(James ) Stuart Park was certainly competent, but from what I can find online, his flowers do not look like these, which are more Manet-like or more painterly. Somerville Shanks is a better fit, but I am not quite convinced.

Basically, if this were my picture or that of my institution, I would want a Fergusson expert like Billcliffe to assess it and rule on it.

Compare the little known signed by Edward Drummond Young in the Hunterian Art Gallery, Still life with lemon and glass of wine. This was attributed to Leslie Hunter, until the signature was read through the layer of dirt, when I was a curator at the Hunterian . Roger Billcliffe will know it well. Its provenance has not been established - but Roger may be able to comment on this too.It may never have been on public display.
Park was a more senior artist and undoubtedly influenced Fergusson, who would have known his work well . The rest of the painting is more like Young. Shanks' still lives may be a few years later than this - but he has not yet been much studied

It would assist if the collection (the RSA) could indicate how and when the painting came into their possession. The accession number indicates 1992. I share the concerns expressed by Martin Forrest and Richard Green over the rather crude way in which the foreground is painted. An image of the back of the canvas / stretcher may help in forming a tentative conclusion about the work.

Thank you to everyone who has posted here and the points you have made in the discussion. It is all of great help to us in attempting to find the right attribution for this painting.
Frustratingly we are yet to find any records that identify when, and from whom, the painting entered the collection and there is no sign of a signature or any inscriptions of note to be found on the reverse. It is certainly prior to 1992 (this is merely the year it was accessioned). I share the concerns expressed and would tend to err away from Fergusson or Peploe. I have contacted Guy Peploe and am waiting to hear back from him on his opinion. Martin, thank you for your advice, I will contact Roger Billcliffe and see if he can offer an opinion. Hopefully we can get to the bottom of this one, there may be a eureka moment from the archives, but if anyone has any further ideas in the meantime please do share them!

I have since had a response from Roger Billcliffe, which he has given permission to share here:

"Thank you for this, an interesting conundrum.

I can clear one thing up straight away - I received your email while in Edinburgh and so showed it straight away to Guy Peploe. he said it was definitely NOT by S J Peploe.

But is it by Fergusson? I am in two minds and would like to explore my thinking with you. If you want to extract anything here and add it to your discussion thread, I am happy for you to do that. In the meantime a hi-res image and more information about how the RSA acquired it would be helpful.

Given the animosity between Fergusson and the RSA I cannot believe the RSA knowingly acquired it as a Fergusson in his lifetime. Also, Fergusson is unlikely to have presented them with a painting, and if he did it would not have been so inconsequential as this.

I do not think it is by Stuart Park, although the flowers have undoubted similarities to his, but the rest of the painting is unlikely. Nor am I convinced of the Drummond Young attribution, who seems to have usually signed his paintings on the front, while Fergusson did not (usually on the back) - and this painting seems unsigned.

Similarly, Somerville Shanks was a very dedicated and flamboyant signer of his paintings; this, and stylistic differences, rule him out for me.

The flowers and cups are interesting and distinctly similar to other Fergusson works - the identical cup in the Aberdeen painting is very interesting.

The size is very unusual for Fergusson, especially as a canvas. But there are other similar paintings pre-1905 of still life both with and without flowers.

I am leaning to this being an abandoned painting, probably from 1898–1904 (I’m not sure of the date on the Aberdeen painting - if it's on the back it was probably added by Fergusson much later when he set about trying to instil some order in his unsigned and undated paintings). The background seems a little hi and the foreground cloth is unresolved. I think, if it is by Fergusson, that he realised that the canvas was too big for the subject and turned instead to the Aberdeen painting.

I still feel the same, although veering a little more to it not being by JDF, and would still like to see it - perhaps when I am next in Edinburgh"

We have also reached out to a past curator of the Fergusson collection in Perth.

The possibility that this could be an unsuccessful experiment or preliminary version by Fergusson seems quite plausible. I will be very interested to hear what Roger Billcliffe finally concludes.

One should not ignore Martin Forrest's assessment of 01/07/2019, with which I agree, that the drawing of perspective and scale is not up to Ferguisson's standard. And nor is the very pedestrian handling of paint. At best it seems to me an imitation of his early style.

Well, it is certainly "style of" Fergusson, and I've seen rather worse imitations of "name" artists, even if that's beside the point.

Thank you for the invite to contribute. My instinct is the handling isn't quite right for early Fergusson- bit lumpy – not quite loose and creamy enough and unskilled in comparison to the very assured draughtsmanship in the Aberdeen/Perth examples. The plate and its contents seem especially weak, as well as other foreground elements; cup and saucer ellipses, cloth.

The lovely tonal contrasts and generally broad 'painterly approach' strongly recall the early work of Peploe, Fergusson (and Stuart Park in the backdrop/roses), but the actual handling lacks their flair.

I see a kind of composite that makes me think an artist influenced by a variety of precedents-sorry I can't suggest who.

Thank you to Kenneth McConkey for his comments, below:

'This has been a fascinating discussion and it was good to reach out to Roger Billcliffe and Kirsten Simister. It is also a thread in which everyone has been right! References to Stuart Park resonate particularly. I guess the only answer will come when the experts stand in front of the work itself.

I would only add that Fergusson, in his early career was eclectic. His earliest watercolours are decidedly in the manner of Melville and Watterston Herald, one or two oils painted on the beach at Tangier have unmistakable swipes at Brangwyn, while the strange picture of figures washing clothes on the banks of the Loing (Glasgow Museums) has an even broader range of possible sources. If one thing is certain about important artists’ early work, it is that it will be atypical and theft is not uncommon!

This of course is not to say that the picture in question is ‘right’ or ‘wrong’.'

It appears to be unfinished on purpose. If you could ascertain when those types of plates and cups became popular that could be helpful. It jumps out to me as the 1930s.
Park's paintings are all well finished. He wanted you to smell the flowers. https://www.mutualart.com/Artwork/ROSES-IN-A-GLASS-VASE/335D5CB24B77832D
This painting if anything, just wants wants you to feel the mood of the afternoon. And it's quite somber. If John Duncan Fergusson painted this, it's a wake. Given his usual explosion of color, the absence of it would be significant to him and his friends. But if he painted it, he did use his self portrait colors and considered it finished.
This is Samuel Peploe in the same somber Vein. https://www.wikiart.org/en/samuel-peploe/coffee-and-liqueur-1905 but considerably nicer.
Whatever you find lacking in draftsmanship could be fixed without much trouble. It hasn't been overworked. So lack of talent hasn't left it looking like that. So, I'm going to stay with my original theory. It's unfinished because it's meant to be unfinished, it was painted to capture a moment. The Moment was all dark and wobbly with a single tea cup separated from the pack.