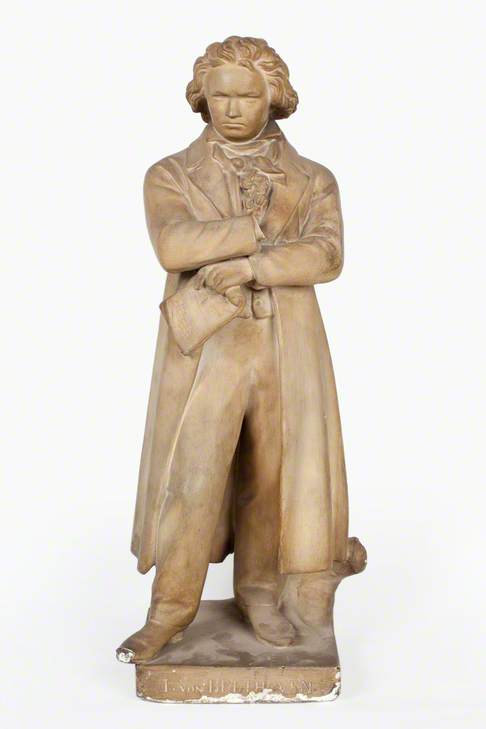 The back of this figurine is inscribed ‘C Vanni’. These websites suggest that the sculptor could be Carlo Vanni:

As one site says, ‘In 1883, figurine maker Cav. Carlo Vanni established a school in his palace in Coreglia to educate young people in the trade. When he moved to Vienna in 1915, he donated the building to the municipality.’

Vanni’s residency in Vienna is interesting in relation to this figurine of Beethoven.

Thank you to Andrew Shore for this contribution in celebration of the 250th anniversary of Beethoven's birth in December 1770.

The signature, of course, does not preclude this being after a work by someone else, though that would have to be established.

The best person to address this would seem to be Jacob Simon, given his work on plaster figure makers active in Britain from 1800, which included a good number of Italian immigrants, mainly from Lucca.

The objects at the plaster figure museum in Coreglia, which is located in the Palazzo Vanni, include a bust of Beethoven which can be seen at this link:

This is a photo of Carlo Vanni:

I found this in connection to Vanni:

There are some similarities between the plaster bust Jacinto linked to above and this one at the RAM: https://artuk.org/discover/artworks/ludwig-van-beethoven-17701827-252885

Yes, Andrew, it is very similar, if not the same.

Ideally one could get vital dates for Carlo Vanni, but attributing this to him seems reasonable based on the available evidence.

I have sent a brief e-mail to the museum in Coreglia asking for the vital dates of Carlo Vanni. I will report back as appropriate.

Vanni may have died in Vienna, since he appears to have moved there in 1915 leaving his Coreglia palazzo and figurine collection (est 1883) to the town.

Carlo Vanni, son of Giovanni and Maria Giovanna Casani, born at Coreglia 19 August 1824. Belonging to a family of figure makers that had for many generations travelled abroad, he emigrated to Austria towards the middle of the 19th century... and soon obtained a name as the leading decorator of Viennese palaces. He gained entry to the Hapsburg court and initiated a sentimental relationship with Fanny Francesca Werner, a noblewoman destined soon to become his wife.

For his professional talents and for the notable artistic merit of his work in Austria he was awarded the title of Baron, given him by the Emperor Franz Josef.

Returning to Italy and now becoming famous, he was commissioned by Pope Leo XIII to execute certain stucco decorations in the Vatican Palace.

[the biography continues with his return to his place of birth, the naming of his Palazzo after him, the institution of a school of design and sculpture and its importance for figure makers. The school opened in 1883 and closed in 1946.]

Carlo Vanni at his death, which took place the 30th of August 1915 in Baden (Vienna), by his will benefited his native Coreglia... Today the Palazzo Vanni houses the ‘Museo della figurina di gesso e dell’emigrazione’, in which works and equipment from the school of design and sculpture is exhibited.

I have had a very quick response from Ilaria Pellegrini at the museum in Coreglia, who sent me scanned copies of two pages from a book with a biographical entry on Carlo Vanni.

He was born on 19/8/1824. He emigrated to Vienna in the mid 19th century, where he married, had a very successful career working as a decorator (probably involving stucco work) for Viennese palaces, and was made a Baron by the Emperor Franz Joseph. He returned to Italy, where he did work at the Vatican for Leo XIII (who became Pope in 1878), and also returned to Coreglia, where his school (Scuola di Disegno e Plastica) was established in 1883. He died on 30/8/1915 at Baden (Vienna), which must be the spa town of Baden bei Wien.

I will attempt later today to forward what I received to Marion so that she can post it here and/or keep it on file for future reference.

I see that Jacob Simon found the same information from apparently the same source, though I only saw his comment after posting my preceding one.

In response to the discussion question, “Could this be by the plaster figurine sculptor Carlo Vanni?”, it is probable that it was made by, or produced for, this maker, Carlo Vanni (1824-1915), on the basis of the name on the reverse, given that we do not currently know of another "C. Vanni". In my experience of plaster figure makers it will be difficult to find further supporting evidence unless a catalogue of Vanni's range of plaster figures emerges (possible but very unlikely). I would guess that the figure would have been more likely to have been made in Vienna, where Beethoven died, than Italy.

The Coreglia museum site shows it also has a copy of this bust of Beethoven, already pointed out by Andrew Shore as in the RAM as well:

While 'Carlo Vanni' may be OK for the full-length, how specific can one be in describing the bust - assuming is it 'Coreglian' as presence in that collection suggests. Just 'Italian, probably Tuscan' or 'Italian school (probably Coreglia)' or some such variant. It would be sensible to resolve the maker issue on both at the same time, given they appear to be broadly from the same stable.

These figures and busts were copied time and time again by different plaster figure makers across Europe. The bust, not the subject of this discussion, is unsigned. As such it will be impossible to assign the bust at all safely without further evidence such as provenance, even as broadly as Italian. It could come from various countries. The figure by Vanni and the bust both depict Beethoven and are both in plaster: that may be the only links between them.

The museum is not devoted to the work of Vanni but that of many plaster figure makers over a broad span of time, since its aim is to reflect the history of the craft by people from that region. In other words, the bust could be by any number of people, though its presence in the museum would imply it was made by an Italian from the region, and obviously no earlier than the 19th century.

A bust in the Coreglia collection will probably be of local origin. However, that in the Royal Academy of Music (link in Pieter's email) could come from a wide range of countries, even if similar to the Coreglia bust. Busts were widely copied by taking new moulds meaning that casts from the new moulds will be almost identical to older casts. Figure makers spread out across Europe with their moulds and then used them to produce casts locally.

This year-old discussion, “Could this be by the plaster figurine sculptor Carlo Vanni?” has attracted 18 responses, including my own of 19 December 2020, as follows:

“In response to the discussion question, “Could this be by the plaster figurine sculptor Carlo Vanni?”, it is probable that it was made by, or produced for, this maker, Carlo Vanni (1824-1915), on the basis of the name on the reverse, given that we do not currently know of another "C. Vanni". In my experience of plaster figure makers it will be difficult to find further supporting evidence unless a catalogue of Vanni's range of plaster figures emerges (possible but very unlikely). I would guess that the figure would have been more likely to have been made in Vienna, where Beethoven died, than Italy.”

The discussion has been dormant a year. I’d suggest that the time has come to close it on the basis that it is the work of Carlo Vanni (1824-1915).

A figurine that is not quite an exact copy of this work is on the Invaluable website. It shows what the missing hand would have looked like. I have attached a composite.
https://www.invaluable.com/auction-lot/continental-parian-sculpture-of-beethoven-512-c-17f475daff#

Description
A portrait statue of Ludwig van Beethoven standing, holding a part-rolled manuscript in his left hand. Arms across his body, contemporary clothing, blank eyes. There is a stabilising 'tree-trunk' on the lower left and the right hand is missing.