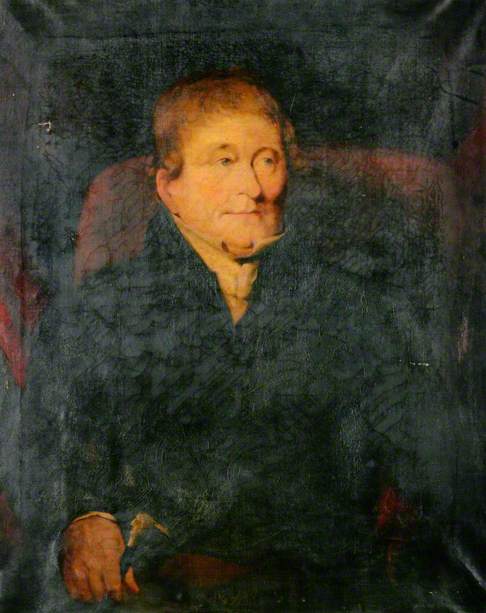 For Crotch's appearance in 1822 see the stipple engraving by James Thompson after William Derby published in the ‘European Magazine’ on 1 November 1822. British Museum 1920,1211.466.

This discussion is now closed. The conclusion is that this is neither a portrait of William Crotch (1775–1847), nor likely to be by Joseph Slater Junior (1782–1837). The title has been amended to ‘Portrait of an Unknown Man’.

In the same collection there is another portrait of Crotch by ‘unknown artist’, oil on board, 36.6 x 30.5cm. This picture shows Crotch holding a pen and manuscript against a landscape background. There may be a review.
https://artuk.org/discover/artworks/william-crotch-17751847-1360/view_as/grid/search/works_auto:william-crotch/page/1

And two portraits at the NPG, which closely match the BM engraving and Norfolk Museums oil painting, but are harder to match with the present portrait. https://www.npg.org.uk/collections/search/person/mp01125/william-crotch?search=sas&sText=crotch

Here is the print after William Derby dated 1822 cited by Martin
https://www.britishmuseum.org/research/collection_online/collection_object_details.aspx?objectId=3632887&partId=1&searchText=william crotch&page=1

The sitter looks quite a bit older in the work of 1839 by Linnell at the NPG.

Martin, it is Josiah Slater (rather than Joseph, although this seems to be a common mistake) who exhibited Dr. Crotch at the RA 1813 and he seems to be mainly a portrait draughtsman. But let's keep looking.

Barbara, the Slater family of artists have been thoroughly confused by art historians and everyone since their own lifetimes - and Graves unfortunately seems to have got it almost completely wrong, and perpetuated the misconceptions. The portrait of Crotch exhibited at the RA in 1813 was, it seems, actually by Joseph Slater Junr (1782-1837).

I believe the current wisdom (apparently accepted by the NPG) is that Josiah Slater never existed at all. The misunderstanding arose in part because Joseph Slater Jr (his father Joseph Senr, 1750-1805, was also an artist) sometimes signed with an abbreviated 'Jos.h', and this was misinterpreted as Josiah. But it is more complicated than that, and involves Joseph Jr's two artist younger brothers Isaac Wane S. (1785-1836) and John S. (1786-1835).

The best analysis I know of all this can be found here: http://www.michaelsmuseum.com/articles/Slater.pdf

The exposition is extremely well-researched and convincing, and I for one am extremely grateful to the author, Michael Tormey, for clarifying something that has perplexed me for years.

Ok Osmund I stand corrected. I always go via Royal Academy catalogues, but this time I see Graves is wrong.

Martin, to answer your initial question, this is unlikely to be the "Portrait of Dr. Crotch" that Joseph Slater (c. 1779 - 1837), from his address at 17, Newman Street, exhibited in 1813 at the Royal Academy, as that work was not an oil on canvas, as described here, but was included in the catalogue, as item number 789, under the section listing the drawings submitted for that year. Crotch was also 38 years old in 1813, much younger (I feel) than the man in this discussion's portrait.

An 1815 engraving of William Wilberforce, M.P., was drawn and published by "J. Slater, No. 17, Newman Street". The copy in the NPG collection is attributed to Joseph Slater:

The 1822 engraving of Crotch, aged 47, as it appeared in the October edition of above-mentioned European Magazine, can be seen here, alongside an extensive "Memoir of W. Crotch, Professor of Music at Oxford College" :

His portrait also appeared in Part 34 of "The Percy Anecdotes" - containing Anecdotes of Music and dedicated to Dr. Crotch - which was published on the 19th September 1822, a copy of which is here:

It appears to be based on this portrait of Crotch, also in the Norfolk Museums Service collection, which could now be dated to 1822:

The 1839 drawing of Crotch, aged 64, by Linnell was exhibited at The Royal Academy as catalogue number 870.

I agree with Kieran that this cannot be Joseph Slater's c.1813 portrait, which does indeed seem to have been in the 'Drawings, etc' section of those displayed in the RA's Antique Academy - and as Barbara pointed out, Joseph Slater was primarily (though perhaps not exclusively) a drawer rather than a painter of portraits.

The age of the sitter is a ticklish issue. I agree that our sitter seems older than 38; but judging by the 1822 engraving after Derby (the BM copy Barbara linked us to above is rather clearer than the one on Google books), the oil on board also at Norfolk Museums, and the two 1839 Linnell drawings, Dr Crotch seems to have become fatter of face as he aged, and there is no sign of the shrunken cheeks (probably from tooth loss) apparent in ours. Nor does it seem likely to be a very late (post-1839) image, unless he dyed his hair and cropped it shorter in old age. Thomas Ardill is right to suggest that it is not easy to reconcile these other images with the present portrait, and by implication perhaps to question the identification of the sitter as Crotch altogether.

Re the other 1822 print (from The Percy Anecdotes): while the format clearly derives from the portrait held by Norfolk Museums (https://bit.ly/2lO12Uw), he seems to have been aged up in the engraving. The oil portrait - a most interesting one - must surely be much earlier than 1822: I very much doubt it's any later than 1810 (when the sitter was 35), and is more likely to date from his time at Oxford (before 1805). He is apparently wearing the robes of a Doctor of Music of the university, which he became in 1799: https://bit.ly/2kcj8Po

You are, of course, quite correct Osmund. The Oxford robes portrait must date from a little earlier than 1822.

Of his progress through academia, he commenced his classical education in Oxford in 1788, in 1790 was made organist at Christ Church, took his degree in Bachelor of in 1794, was made organist of St. John's in 1797, and became Professor at the age of 21, followed by the degree of Doctor in 1799, aged 23. He became the first Principal of the Royal Academy of Music in 1823, at the age of 48.

As suggested by Osmund above, given the date of his becoming a Doctor of Music, in 1799, the Oxford painting was most likely executed very shortly after this event.

Further on Dr Crotchet (oops, sorry, Crotch) who was not only a musical prodigy and eminent in that field, but also someone who dabbled in the arts and had artists (such as John Constable) as friends. An interesting article by Hilda Barron (a descendant of Crotch's wife) in Country Life (30 Jan 1948) (sourced thanks to Richard Ormond's NPG volume, Early Victorian Portraits) says that Dr. C. was a keen amateur artist, mainly in landscape watercolours but also in oils (some of these are on ArtUK). The author speculates that the portrait of the younger Crotch (dating from c.1800) noted in Kieran's and Osmund's posts is possibly a self-portrait.
About this I am not sure, but one other point to make is that the portrait (also unattributed by Art UK) referred to by Marion
https://artuk.org/discover/artworks/william-crotch-17751847-1360/view_as/grid/search/works_auto:william-crotch/page/1
is likely to be by John Linnell as it is in the style of his portraits of this period. See, for ex., his portrait of Turner also in the NPG: https://www.npg.org.uk/collections/search/portrait/mw06426/JMW-Turner
This portrait of Crotch is more likely as the work exhibited at the RA 1839 (or related to it). The NPG watercolours would then be studies related to this portrait.
But that's not the one under discussion, so we'll leave that to one side for now.

This cannot possibly be Crotch c. 1813, when he would have been about 38. This is a much older man with sunken cheeks, which Crotch did not have even in his 60s, as seen in his 1839 portrait at the NPG:

The hair also does not match, and neither does the overall facial expression--Crotch had a rather child-like, not to say cherubic face, also seen in his bust at the Royal Academy of Music:

This is some other person.

As Kieran, Osmund and Jacinto have noted, the portrait under discussion cannot be Dr. Crotch (for all the reasons outlined above), nor does it seem likely it is by Slater who in the main produced delicate portrait drawings. Slater's portrait of Crotch of 1813 would show a younger man and, as Kieran showed, it was a drawing.

We know a lot about Dr Crotch thanks to the comments here and in the discussion on Fazi's bust (the latter happily resolved recently; see
https://bit.ly/2Oz25CJ ).

Various public collections in Norwich have much material relating to Crotch--manuscripts, other portraits, etc. At least two of the portraits are unattributed but definitely show Crotch. This one, however, does not.

It appears that Norfolk Museums bought this work in 1940, presumably as a portrait of Crotch. It would be interesting to know how and why they acquired it. We can suppose there was some optimistic identification at work, Crotch being a native of Norwich. But as we have answered the question, this discussion can now be closed.

I support Barbara's conclusions and recommendation in order to close this discussion.

Please see the summary above and thank you to Grant. We have agreement that this discussion can be closed.

Would Art UK please confirm that the recommendation by the two group leaders has been acted on that the discussion be closed on the subject, "Could this be the ‘Portrait of Dr Crotch’ that Joseph Slater Jr exhibited at the Royal Academy in 1813?"

Subject to a decision by the collection, we conclude that the portrait cannot be Dr Crotch (for all the reasons outlined above), nor does it seem likely it is by Slater.

To belatedly answer Barbara's query about why this portrait was acquired in 1940, I suspect it was because they didn't have any portraits of him as an adult (especially older) at the time. They have several more now, but they were obtained later as far as I can tell (1976 for the one Marion mentions in the first comment). They wouldn't have had access to the Linnell portraits at the NPG (acq 1918) in wartime, so there would be nothing to show that Crotch was much more rotund with plentiful white hair as he got older.

And if you don't know that, the portrait here isn't completely implausible as one of Crotch, there is a certain facial resemblence. It could possibly be a relative, and I think Crotch still had relatives living in Norwich, so maybe from one of them, getting confused as which relative was which after a century. His father might be a possibility as according to one of Crotch's extensive notes on his own drawings:

he seems to have lived to a great age.

Thank you for these recommendations. Norfolk Museums Service has been contacted.

Norfolk Museums Service could find no reference in their database to the portrait being exhibited at the Royal Academy. At the moment, with extremely limited access to their files, they do not have the capacity to research this further and cannot confirm this.

Kind of them to do so, but I'm not sure why the Collection were looking for such a reference - I think the RA exhibition (in 1813) idea only came from Martin spotting it in Graves or the catalogue, and wondering if it could be this one. But as Kieran demonstrated over a year ago (14/09/2019 00:47), and Barbara has reiterated, this portrait cannot be it (even if it were of Crotch, which it plainly isn't): that portrait was a drawing, not an oil painting, being found in the catalogue under the heading 'DRAWINGS, &c', and exhibited in the Antique Academy. See attached.

Well, it failed to attach, but it hardly matters. If you want to see it in the original catalogue, see page 32 (33 as paginated) here: https://bit.ly/2SQkWLJ

Given that Norfolk Museums Service responded last month, I recommend that we now close this discussion. Thanks to all Kieran, Osmund, Jacinto and Barbara, we conclude that the portrait cannot be Dr Crotch (for all the reasons outlined above), nor does it seem likely it is by Slater.

Description
It was previously thought that the sitter was Norwich-born composer and organist William Crotch (1775–1847).