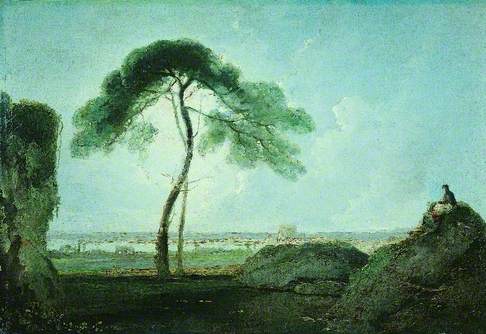 Picking this up again: a brief email exchange on something else with Charles Greig (who knows Hodges well) elicited the following comment from him on this painting: 'I agree there is a fair possibility that it is by Hodges although Johnson Carr (said to be Wilson’s most promising student but he died young in 1765) is also a strong candidate.'

Carr (or Kerr, b. 1743), a northern England man who was a Wilson's pupil c. 1757-63, died of TB in January 1765. According to ODNB he is only known by one chalk drawing of 'Westminster Abbey from Pimlico' ( exh. 1948, priv. coll.), and 1807 report by Farington of his hand contributing to a painting by Wilson, so demonstrating that anything is by him is problematic.

It would interesting to have Paul Spencer-Longhurst's thoughts from a Wilson viewpoint,

Paul Spencer-Longhurst says that it appears in W. G. Constable’s 1953 monograph on Wilson as by him (pl. 97b), but that when he and Kate Lowry saw it in early 2018 they would go no further than ascribing it to a follower. It had also been rejected by Sir Ellis Waterhouse.

He will give it some further thought and hopes to comment further as soon as he has a chance.

Paul Spencer-Longhurst agrees that it could be by Hodges, cautioning that it is a personal opinion and far from definitive. He writes, ‘In the absence of an identified subject the relevance of a non-visit to Italy is perhaps marginal but stylistically it ticks many of the right boxes. However, the nearest compositional comparison seems to be The Tomb and Distant View of Rajmahal Hills of about 1781 (Tate T00690) and not much else.’

Since this has generally been a matter of personal opinions from people with reason to know about Hodges, or Wilson, mine would be to to retain the current 'follower of Richard Wilson' but add '(possibly William Hodges)'. What's the collection view, since I doubt this is going any further as regards stylistic-parallels evidence?

A new curator of art takes over from our previous contact this month, so this can be discussed with them after their handover period.

This discussion has now been raised in an email sent to the new curator of art.