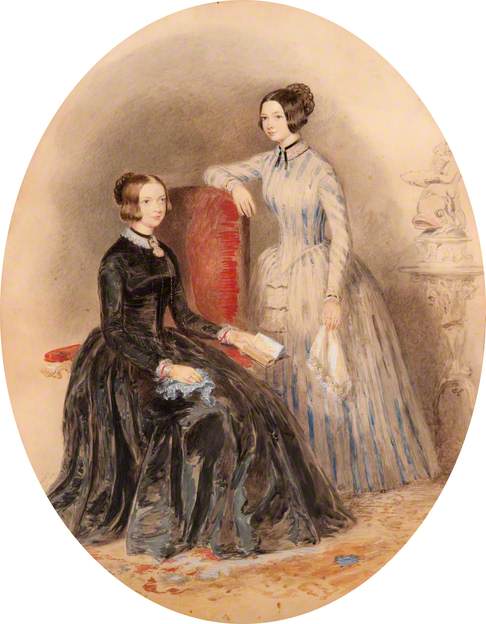 There are two other portraits by John Henning in the same collection, ‘Portrait of a Boy’ and ‘Young Boy, Seated, and Young Girl’. Could they be members of the artist’s family?
https://bit.ly/2GAWycM
https://bit.ly/2SMa0kz

John Henning began by drawing plans and elevations, and established himself as a wax modeller in Glasgow. He studied at the Trustees’ Academy, Edinburgh then moved to London in 1811, where he worked for Wedgewood, attracting royal patronage. He exhibited at the Royal Academy from 1812 and was a founder of the Royal Society of British Artists in 1824.
https://bit.ly/2BSQrwP

The collection comments: ‘The Henning collection of oils/works on paper requires more research and rationalisation. As Paisley Museum staff are now working full-time on the Paisley Re-Imagined Project, we do not have the capacity to check the provenance of these individual works to verify the attribution. We would be happy to ask for help with this on Art Detective.’

This discussion is now closed. The artist record remains unchanged. A conclusive attribution to John Henning Senior (1771–1851) would require further research, which is prevented by redevelopment of the museum and restrictions on the collection and its staff as a result of the Coronavirus pandemic.

Are there any Minton experts on Art Detective?

The large cherub and dolphin group on the stand is based on a salt cellar originally designed by John Webb for Felix Summerly's Art Manufacturers and produced by Minton from 1847, according to the V&A http://collections.vam.ac.uk/item/O306941/salt-cellar-bell-john/

Minton subsequently manufactured it in a number of finishes and sizes, including the large majolica version which appears in the painting
https://www.jessedavisantiques.co.uk/en-GB/majolica/minton-majolica-cherub-dolphin-salt/prod_10110#.XGxkZej7TIU

However I've so far failed to establish when this large version was first manufactured, after 1851 would obviously rule out Henning as the painter.

Has John Wall, author of a 237 page book on Henning of 2008, expressed a view on these three works?

Not sure I want to get too involved on this one, as without answers to some necessary questions and other input from the Collection (which I quite understand is impossible at the moment), we are doomed to frustration. But there are one or two quickish points worth making.

First, re the portraits linked to linked in the intro. ‘Portrait of a Boy’ is, I rather think, actually a girl wearing a lace-edged pinafore, and dates from the end of the 19th or early C20th. If I'm right this cannot be a child, grandchild nor probably even gt-grandchild of John Henning (Senr); and it can't be by him (d.1851) or his son John Junr (d.1857) or any of his brothers either. It's not very good, anyway, and without any idea of how the Collection acquired the works there's little point in speculating on who it might be of and/or by.

‘Young Boy, Seated, and Young Girl’ is earlier - I would guess mid-C19th, perhaps a bit before, but there are insufficient firm dating clues to be sure. It is rather better in a sketchy way, and I can imagine it being the work of a sculptor dabbling in oils. The boy is wearing the Tudor-style long coat of a pupil at Christ's Hospital (then in London and Hertford). It should really be very dark blue rather than black, and there were once other schools with similar uniforms; but the hint of yellow peeping through from the underskirt suggests Christ's is intended.

Re the main work under discussion, I am surprised this is described as an oil on canvas - to me it looks suspiciously like a watercolour with gouache, though the paper may have been mounted on a fine canvas support. But I may be quite wrong...and of course we can't check. The date (from the sitters' clothes and hair) looks to be early-mid 1840s. It's decent enough, and of a very common early Victorian portrait type. My first thought was that it seems too adept for a sculptor trying something else, and John Henning's DNB entry by John Malden (who also wrote a book on Henning, in 1977) mentions only preparatory sketches.

However, I see that early in his career in Scotland (1808-10) he exhibited at the Assoc. Soc. of Artists at least five portrait drawings, and another at the R.A. in 1813. So it seems quite possible that a portrait like this might have been in his repertoire. The next question to the Collection would have been why is it (and the other works mentioned above) attributed to him? But I guess it won't be possible to get an answer to that either, sadly.

Perhaps adding very slightly to the chances of him being the artist, in the 1841 Census (attached) John Henning's profession is given as 'Artist Drawer/& modeller', rather than ‘sculptor’ as in the 1851.

This discussion, “Could this oil painting be by John Henning (1771–1851), the Paisley-born artist who was primarily a sculptor?”, has attracted six comments, all dating to last year. The comments suggest that the attribution to Henning remains uncertain and is unlikely to be resolved given that the Paisley Museum and Art Galleries are unable to provide further information during their building project. As the new Group Leader for 19th century British Portraits, I suggest that that the discussion should now be closed on the basis that it is unlikely to reach a sufficiently reliable conclusion. Would the Group Leaders for the other groups involved be content for me to recommend that this discussion be closed?

Thank you for your comments all. A small correction to the info provided by Jade Audrey King. It was Henning's work with Princess Charlotte that secured him work with Wedgwood, rather than the other way around.

The Henning collection (and associated Hennings) catalogued in the recent decant for the Paisley Museum Re-Imagined Project is large in number, and requires dedicated research in order to ascertain if the work is by John Henning Senior, or members of his family (like his son, Samuel Henning, who was a gem engraver). Paisley Museum received two large gifts in its history in relation to Henning, although the provenance requires further research. The collection holds drawings by Henning, so it is not completely unlikely that he would stretch to oil, watercolour or gouache. Henning experimented with materials throughout his career and strove for self-improvement. Truthfully this conversation requires further research in order to be conclusive, and with restrictions on the collection and staff right now through COVID and the redevelopment of the museum, I think the discussion should be closed until such times as we have the resources to investigate further.

With thanks for all the comments,
Victoria

While I understand why this matter has no immediate resolution, it is now even clearer why a firm statement that a continuing firm assertion that the artist is certainly John Henning rather than at best '(probably) John Henning' is not very satisfactory.
'

Thank you for your comment. As we are unable to further this right now (working from home with no access to collections or documentation), I suggest we close the thread. My colleagues who recorded the data for Art UK many years ago originally catalogued this as by John Henning and had evidence or grounds to believe this as the correct attribution. Unless evidence appears to the contrary, I believe it should remain as is until we are able to gain access to collections and paperwork.

In my post of 11 October I suggested that, subject to Group Leaders for the other groups, this discussion should now be closed on the basis that the comments made in 2019, and this year following my post, suggest that the attribution to Henning remains uncertain and is unlikely to be resolved. The collection has now kindly provided its reaction. So the recommendation now is to close the discussion on this basis.