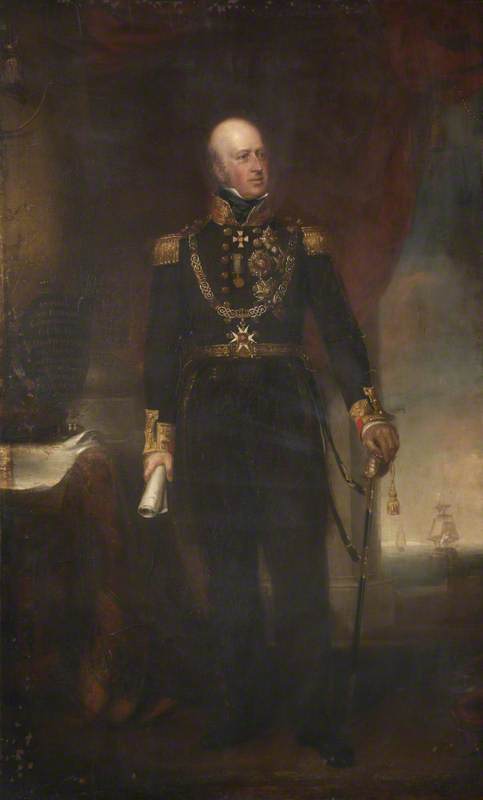 Could this be the portrait by H. Patterson, commissioned for presentation to the Devonport Town Hall and shown at the Royal Academy in 1840? The "Spectator" said of it "As the production of a young artist, H. Patterson's whole-length of Sir Edward Codrington, (442,) is deserving of great praise; though the tender sensitive expression is by no means characteristic of the firm, commanding air of the hero of Navarino: the painting is thin, but the colouring is harmonious."

The style is not totally incompatible with the three quarter length portrait of the Mayor of Bodmin, Joseph Hanley in Bodmin Shire House. That is likely to be earler as Hanley was Mayor for the third and last time in 1837

I'v found couple of other references. There's an interesting list of the paintings in the Devonport Guildhall in the 'Report & Transactions
Devonshire Association for the Advancement of Science, Literature and Art for ‎1878, which describes it as "full length, in naval uniform. By Paterson".

There's also a letter from Codrington to Sir Martin Shee in the New York Public Library, which begins "A tradesman now living in Covent Garden, & formerly of Devonport has had a full length picture painted of me by a young artist of that town ..." .

I noticed that, and wondered if it might have been a convenient London contact address provided by his patron, the "tradesman now living in Covent Garden, & formerly of Devonport ", rather than where he was actually living and working.

I don't know if there's anything of use written on the oval plaque on the right.

The provenance seems good, though. Devonport became part of Plymouth in 1914, and presumably all their civic assets were merged. If Patterson's picture is anywhere, the civic collection in Plymouth would be the place to look for it. ( I was rather hoping that the list of paintings in the Devonport Guildhall in 1878 could be neatly matched up with works in the present Plymouth collection. Unfortunately, it turns out to be rather more complicated than that.)

It was definitely Burnet, as stated here, though the writer calls the artist "Pattieson":
http://books.google.co.uk/books?id=KPsVAAAAYAAJ&pg=PA46&lpg=PA46&dq

I am not sure if this helps, the attached is an article from the Worcestershire Chronicle dated 16 Sep 1840. It suggests that the full length portrait of Codrington was placed in Devonport Town Hall in 1840.

The DNB entry for Codrington, too, says the Patterson portrait is (or was) at the "Town Hall, Devonport". The West Kent Guardian wrote admiringly of it in May 1840 - "one of the best pictures in the Royal Academy this year" - and again says it is full-length (see attached). The story mentions an earlier portrait of another sailor, the Earl of Northesk, "in Fisher's book of public characters". Perhaps they meant Wm Jerdan's "National Portrait Gallery...", as listed in Northesk's DNB article. It's in Vol III (1832): image of the print attached. Also not incompatible with "our" Codrington.

There's no doubt in my mind now that this is indeed Patterson's portrait.

But what of "H. Patterson" - who was he? He was initially elusive, but emerged in the end.

His name was Hugh Patterson, and he was a native of Limerick, Ireland, according to the 1861 Census where he is found at 44 Union St, Plymouth, a widowed "Artist, portrait painter", age 55. By 1871 ("Portrait painter") he had moved to Summerland Place in the same city; and there he died, aged 65, on 21st Sept the same year, as given in a notice in the Western Times on the 26th. In 1851 his Scottish spouse Isabella ("Artist's wife") and their children are at Union St, but Hugh is absent - perhaps in London though I can't find him anywhere. He is in the 1844 Pigot Directory for Plymouth, at Union Terrace; but listed, oddly, in the classified section under 'Painters & Glaziers' rather than 'Artists' - either an error (in the alphabetical list he's a 'painter'), or he was having to do other work to make ends meet.

Working back from there to London, we find his marriage to a naval officer's daughter in January 1840 (St Andrew-by-the-Wardrobe), his father there given as Robert Patterson, a farmer: he signs clearly "Patterson", not Pattieson or any other variation. In the (June) 1841 Census he ("Artist", and spelled 'Paterson') and his wife are at 20 King St, Covent Garden - quite literally 2 mins' walk from no 2, The Piazza, where his patron Richard Burnet was in business (and perhaps residence) from at least 1839-51.

The only other mention so far found is in the Phillimore papers at Hampshire Archives: two letters of March 1865 from Patterson to Captain (later Admiral Sir) Augustus Phillimore. See here: http://calm.hants.gov.uk/Record.aspx?src=CalmView.Catalog&id=88115/4/20/2/174&pos=3

The naval theme completes with the career of Hugh's younger son, Henry, who became a Ship's Master in the Merchant Marine.

Yes, I attached an image of the Northesk print to my earlier (and shorter!) post above, and mentioned the DNB article. I hadn't realised the Jerdan book was published by Fisher - and thus indeed the same book mentioned in the West Kent Guardian.

I think Codrington was C-in-C Portsmouth 1839-42, rather than Plymouth. However, he had been elected MP for the new seat of Devonport at the 1832 election, and remained so for the next 7 years. His Portsmouth naval appointment was made in November 1839, upon which he resigned his seat at Westminster. Doubtless the portrait was commissioned by Richard Burnet in recognition of the end of his parliamentary tenure.

Sorry Osmund for missing your attachment - and thanks for correcting me about Codrington. I agree that all the evidence suggests that the Codrington portrait at Plymouth is by Patterson

Of ever-decreasing relevance to the core discussion, sorry, but Patterson's patron Richard Burnet left an interesting legacy. Born in Devonport around 1785, he was a merchant in his home town (where he married in 1824) before opening a carpet warehouse and drapery store in the Piazza, Covent Garden, with his brother James in the early 1830s. After James's death in 1849 he carried on the business, joined two years later by his son Boyd. The 1840 commission to Patterson to paint Codrington for Devonport's Town Hall is not surprising, as it's clear that even a decade later Richard still had strong links there - most of his London employees give the town as their place of birth in the 1851 Census.

After Richard's death in 1854, Boyd continued to run the firm, and with increasing success. In 1877 he moved from the Piazza to a pair of large new houses with purpose-built business premises, up the road at 41/42 King Street. The drapery went ever more upmarket, with domestic and ecclesiastical departments, and a huge range of the finest 'art' fabrics from all over the world. When Boyd died in 1891 he was worth a very substantial £125K. But even then the business continued to flourish: in the 20th Century, as 'B. Boyd & Co', they moved again to Garrick Street, and became famous for supplying, dyeing and painting fabrics for prestigious theatre and ballet productions - they were used by Diaghilev's Ballet Russe amongst others, and were still in business in the mid-1960s.

This has come to a very neat conclusion, thanks to the researches of Osmund Bullock and others. The artist is now known to be the Irish-born Hugh Patterson (1805/06-1871). His style in the portrait at the Plymouth Museum (formerly at Devonport Town Hall) tallies with his other known work in Bodmin Town Hall, as Martin Hopkinson points out. We might also now expand the artist's name of that one to Hugh Patterson, rather than just H. Patterson. Essentially based in the West Country, mainly Plymouth, Patterson also had a brief London presence, due to his successful patron, the draper, Richard Burnet, as Osmund has shown.
Unless anyone has more to add, this discussion could be concluded.

Thank you for that Barbara, though I think it was really Oliver who cracked the Burnet connection - I have merely (over-)embellished it.

Re Hugh Patterson, I have one small correction to what I wrote about him above. The Limerick birthplace deduced from the 1861 Census is probably wrong - I extrapolated too far from one "ditto". I think your phrase "Irish-born" is as much as we can conclude (from both '61 & '71).

Dear all,
Thank you very much for all your time with regards to this painting. We can now add all of this valuable information to our database and confirm that Hugh Patterson (1805/1806–1871) is now considered the artist. I have been trying without much success I’m afraid to turn up more information about the Devonport Guildhall’s collection and how it came to the Museum. Hopefully more information will be available on this collection in due course. Thank you again.

Description
This work was exhibited at the Royal Academy in 1840, no. 442.