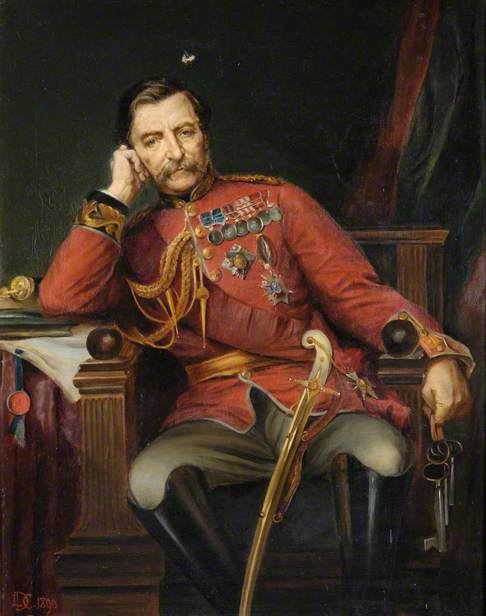 Could this be by Lowes Cato Dickinson (1819–1908) or a copy of the following painting at the Government Art Collection?

The signature on the bottom left of this painting is very similar to others signed by Dickinson: http://www.bbc.co.uk/arts/yourpaintings/paintings/the-reverend-septimus-c-h-hansard-18231895-32509

The artist of this work is now listed as Lowes Cato Dickinson (1819–1908). '(General the Right Honourable Robert Cornellis, 1810–1890, Baron the Lord Napier of Magdala, GCB, GCSI, Governor of Gibraltar, 1876–1883)' has been added to the painting record as additional title information.

These amends will appear on the new version of the Your Paintings website in January 2016. Thank you to all for participating in this discussion. To those viewing this discussion for the first time, please see below for all comments that led to this conclusion.

To judge by this image, there seems no reason to doubt the authenticity of Aberdeen's 1890 version. The Your Paintings image of the Government Art Collection's painting is not good enough to judge, but interestingly their online catalogue says it is inscribed bottom tight "REPLICA / A / 18LD89", (http://www.gac.culture.gov.uk/work.aspx?obj=32706), suggesting that there is an earlier prime version! He did not exhibit it at the RA anyway.

The portrait of Baron Napier by Lowes Cato Dickinson apparently also exists in another version at the Royal Engineers in Chatham, Kent (which is not recorded on Your Paintings). This version is said to date from "about 1885". All this will need to be checked, but if that is the case then the both the picture in the Government Art Collection (as Andrew Greg noted) and the one in Aberdeen are copies/replicas. It would make sense that the prime version was with Napier's regiment (and probably commissioned by them) although it is also worth bearing in mind that the portrait itself shows the sitter in his role as Constable of the Tower of London.

Andrea's earlier comment, which I've just seen, clearly establishes the date of the completion of the portrait as 1888 (not 1885 as the Catalogue of Portraits and Silver at the Royal Engineers, 1963, indicated). Now we just need to untangle the versions.

The cuttings found by Andrea tell us that the original of 1888 was life-size, like the Govt Art Collection replica dated 1889. This version of 1890 is just half-size, 26½ x 21 in, and perhaps painted for some more personal purpose. I suspect, Barbara, that you're right in suggesting that the prime version may be the one at Chatham (probably hanging in the RE HQ Mess), assuming it's full-size - unless, of course, the family have it (the title is extant).

Two other portraits by Dickinson on Your Paintings have duplicates, and both pairs look like they are probably autograph. There is also a decent copy by him of an C18th portrait by Wright of Derby...so no stranger to producing replicas. There are several works of his, too, of a similarly small size.

I have found a high-res version on the U. of Aberdeen's website ( http://digitool.abdn.ac.uk/ - do a simple search for ABDUA 33124). While the quality of the face is good, and I feel autograph, the bottom of the painting is pretty awful - see the attached details. And I think the GAC version looks like it may be similarly deficient. Other works on YP show that Dickinson was perfectly cabable of rendering clothing and furniture well when he wanted to; so either he got bored with the repetion and barely bothered with the peripherals, or he used an assistant for much of it, just working on the face himself. I suspect the latter.

I could be right about the purpose of this small-scale version: it seems likely that it was painted for Cornellis's close friend Henry Yule.

The donor of the the Aberdeen version was the Murchison of Tarradale Memorial Trust, which was established in 1916 by the will of the bibliophile and scholar Amy Yule. The Trust later ran into difficulties, and eventually its library and collections, along with the house that held them, were gifted to the University. Miss Yule was the only child of Sir Henry Yule, whose papers are now held by the University. To quote their Special Libraries & Archives website, "Sir Henry Yule (1820-1889) was a lifelong friend of Napier and they worked together on the restoration and development of the irrigation system in the North-West Provinces between 1843 and 1849...Henry Yule’s papers are kept with those of Napier of Magdala."

I believe we can now summarise this discussion. The prime version of this portrait was painted, as Andrea confirmed, in 1888. From this version a print was published in 1890 showing the initials of the artist and date on the painting (lower right) as 1888 http://www.britishmuseum.org/research/collection_online/collection_object_details.aspx?objectId=3427146&partId=1&searchText=napier+magdala&page=1

The Government Art Collection's version, with initials and date 1889, is a full-size copy. This was formerly in the Governor's collection in Gibraltar (where Napier had been Governor from 1876 to 1883).

As Osmund has pointed out, the Aberdeen portrait is a half-size copy, dated 1890, from the Yule collection. Osmund tells us that the U. of Aberdeen picture came from Murchison of Tarradale Memorial Trust, initiated by Amy Yule. Her father, Henry Yule, the noted geographer and scholar, knew Napier, so it seems reasonable that he would have wanted a copy of his friend's portrait. And this would have been before 1889 when Yule died. His daughter had the portrait at Tarradale House in Inverness, later taken over by the University of Aberdeen, hence the portrait eventually ending up in the University's collections.

The prime version of 1888 is almost certainly the one belonging to the Royal Engineers, although where in that collections various outposts is not known. It does not appear in Your Paintings. But it was in the published catalogue of the Royal Engineers in 1963 as being at Chatham. While it would be interesting to see the prime version, for the purposes of our discussion, we have arrived at a conclusion which is that the Aberdeen picture is indeed by Lowes Cato Dickinson, a copy of his well known portrait of Baron Napier of Magdala. The question of how much is Dickinson's own work and how much may be that of studio assistants is not really an area we can decide upon on the basis of digital images, and does not change the outcome of the discussion. It should be noted that Dickinson was a very prolific portraitist and the Napier is one of his later works, so some studio input is likely.
What is an interesting question to ask is why the collection of oils belonging to the Royal Engineers, which has some fine works, is not fully represented on Your Paintings.

My theory of this 1890 half-size version being painted for Henry Yule does fall down slightly in view of his death in 1889; but he did not die until the the very end of the year (30th Dec), so perhaps it had been ordered but not finished. According to Yule's Royal Geographic Society obituary, Napier "walked behind the coffin of his old friend" at the funeral, and died himself just ten days later. On the work's completion it would have been natural to deliver it to Yule's daughter - she would certainly have known Napier, and his immediate post-death fame and reputation was huge.

Yes, Osmund, I think we can agree that Henry Yule would have been interested in having a copy of this portrait and that if it was not finished by the time of his death, his daughter, with her own scholarly interests and commitment to her father's legacy, would have taken it. Possibly it was her own commission, but we don't want to speculate too much without more specific information which would take us beyond the question at hand.

I'll just reiterate that while it would be interesting to see the prime version owned by the Royal Engineers, for the purposes of our discussion, we have arrived at a conclusion which is that the Aberdeen picture is by Lowes Cato Dickinson, a half-size copy of his well known portrait of Baron Napier of Magdala.

The collection is happy to accept Barbara's recommendation.

Title
The Constable of the Tower (General the Right Honourable Robert Cornellis, 1810–1890, Baron the Lord Napier of Magdala, GCB, GCSI, Governor of Gibraltar, 1876–1883)

Acquisition method
gift from the Murchison of Tarradale Memorial Trust