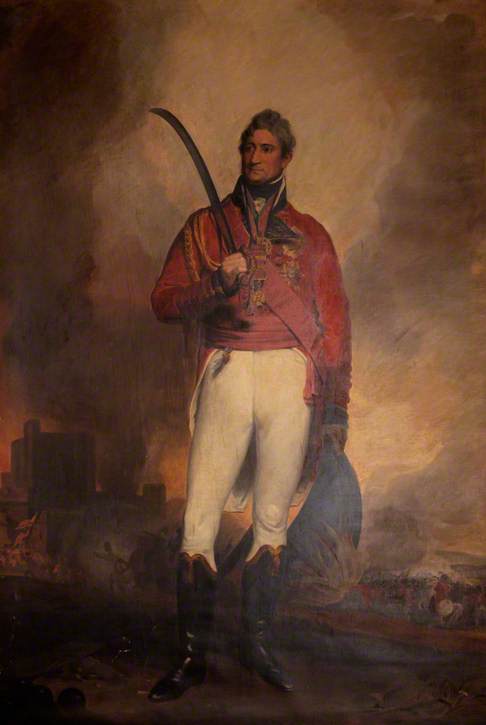 Could this be by or after Sir Martin Archer Shee? Compare the half-length portrait by Shee engraved in 1812, which is in the National Portrait Gallery.

The collection note: 'It could be by or after Sir Martin Archer Shee – there is no signature on the painting so we cannot be sure. Carmarthenshire County Council also holds a version of the full length portrait – ours could be a copy of that or it could be an original. Unfortunately we do not have much information about this painting. The brass plate on the frame simply states 'General Sir Thomas Picton K.C., C.B. Born at Poyston 1758 M.P. for Pembrokeshire 1813–1815 Fell at Waterloo 1815'. If anyone has any more information we would love to hear from them.

This painting is now listed as by the studio of Martin Archer Shee (1769–1850), a copy of an earlier painting.

This update will appear on the new version of Your Paintings, which will be live in early 2016.

Please see below for all the comments that led to this conclusion. If you have any new information about this work, please propose a new discussion from the artwork page.

The version in Carmarthen was presented by Picton's brother . According
to 'Leigh's Guide to Wales & Monmouthshire' for 1831:

"In the County Grand Jury-room is a whole-length portrait of Sir Thomas
Picton, painted by Sir M. A. Shee. It was presented to the county by his
brother, the Rev. Edward Picton, in 1829."
https://books.google.co.uk/books?id=BpNeAAAAcAAJ&pg=PA90&dq

'The history of Haverfordwest with that of some Pembrokeshire parishes'
by Brown, John (1914) places it as a copy of the Camarthen picture (see attachments)

Shee exhibited a portrait of "The late lieut.-general Sir T. Picton KGCB" at the Royal Academy 1816, catalogue number 6
This may be a decent candidate for the Carmarthen picture

Tim Williams's post from the History of Haverfordwest (1914) does seem to answer the question. The work at Haverfordwest, the one under discussion here (Pembrokeshire Museums Service at Scolton Manor Museum) was a copy of the original at the Shire Hall, Carmarthen (now Carmarthenshire County Council). And, as Oliver Perry noted, that picture was presented by Picton's brother, the Rev. Edward Picton, in 1829; he may have given the original commission to Shee. It was probably this posthumous full length that Shee exhibited at the RA in 1816.

There are many depictions of Picton in oil and print. He was a hero of Waterloo so these images had currency. The National Museum at Wales has an earlier full length by Shee of Picton (c.1812; ex.coll: Earl of Plymouth). The Royal Collection picture, a 3/4, was commissioned by William IV as a later contribution to the Waterloo Gallery (exh. RA 1836).

Producing copies was a standard part of the large studio that Shee ran. More research in local history publications might reveal more information about the second full-length portrait of Picton.

Thanks to all the contributors. Unless someone has anything further to add, I suggest this discussion is closed.

'Unfortunately, I know very little about the portrait – only that it hung in Haverfordwest Shire Hall until 2003. Who passed it to the Shire Hall and when is unknown. I am happy for you to use the recommendation 'studio copy after Shee'...

If anyone is interested enough to view the painting in person they are welcome to contact me (giving plenty of advance notice as the portrait is very large – almost life-size!) to arrange a visit to Scolton Manor.'