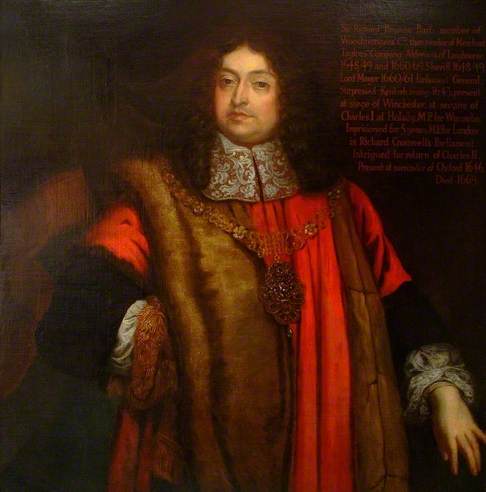 This portrait actually represents Sir Robert Vyner, Lord Mayor of London 1674–1675. It does not resemble other portraits of Browne but is closely copied from the portrait of Vyner by John Michael Wright in the National Portrait Gallery. The association with Kneller is also unlikely as he did not arrive in England until 1676, long after Browne and some time after Vyner had been Lord Mayor.

Dr Catherine McLeod at the NPG agrees with my attribution of the sitter as Robert Vyner and suggests that the style of drapery is consistent with the work of John Michael Wright (1617–1694).

Collection note: We agree the sitter is Sir Robert Vyner (1631–1688), Lord Mayor of London (1674–1675), but further discussion about the artist of this portrait could be helpful.

Is the sitter a relative of Sir Thomas Vyner, of whom there is a portrait at Christ's Hospital? It looks as if cleaning might improve its appearance, which might clarify whether this a studio production, or even a copy. The association of the conception with J M Wright certainly seems to be correct.

The photo here is too poor to attempt any judgment about this painting, beyond agreeing that the head is based on the Vyner family picture. Would it be possible to post crisp details of the face, collar, chain and fur, even if in black and white? Thanks very much.

Sir Robert was the nephew of Sir Thomas Vyner. A slightly better image is available on BBC Your Paintings under Wycombe Museum, listed as Sir Richard Browne by School of Kneller. The fact that the head is copied from the earlier family portrait might imply that it is 'studio of' rather than the work of Wright himself.

I hope this image is more helpful. We are grateful to Timothy Noad for raising these questions about the portrait, and for other comments about it.

Thank you for posting these images, I tried to reply a while ago but couldn't remember my password.

The strange thing is that the head is the least convincing part of this painting. The clothing - its volume, detail and textures - are all reasonably good (though not uniformly so, the red area on the sitter's left shoulder is pretty poor). The head sits uncomfortably above the ornate collar, though, and the lighting of the head is lighter than on the body (the shading below the chin and at the margins of the cheeks, so that the face/head doesn't join very convincingly to the collar and the man's hair). That could be partially a result of the fact that the head has been copied from the family portrait of Vyner, in which Vyner is wearing a low collar that reveals a bit of the top of his neck. But in the Wycombe painting, Vyner's head is fitted onto quite different clothing, within which his jowls would have sat somewhat differently.

It looks like there is something going on behind and above the sitter's head, on the opposite side to the inscription. Can the museum suggest what this might be? The shapes beside his right elbow look like they could be part of a chair, although equally it could be a chariot wheel or something of that sort (and as the sitter is standing he would have no need of a chair). But why is the lower part of it cut off I wonder? It looks like there is some form of drapery which is gathered in the top left corner of the picture, and come from behind his head and right shoulder. Perhaps, then, the lower part of the chair/wheel is obscured by drapery.

My tuppence on whether this is by Wright, is: not exactly. I'd say 'circle of' which is an admittedly lame way of acknowledging the link with the Vyner head, and the quality of the costume. It could have started life as a copy that Wright did of another man's portrait, which he would not have taken so much trouble with as with the original (this would account for the quite good but not brilliant clothing). Perhaps that order fell through, and a different painter added the head, in unknown circumstances but clearly with a close knowledge of Wright's portrait of Vyner (whether from the original or a copy of it that Wright doubtless had in his studio). I don't especially recommend this scenario as being true, but I mention it to indicate the kinds of twists and turns that this painting did surely experience.

For what it is worth, I also think it is not as easy as saying that, because the museum's painting shows Vyner's head, then it should no longer be considered a portrait of Browne.

Thank you Richard for the considered contribution. It would be very interesting to see an x-ray to know whether the portrait was ever altered.

My suggestion would be that a portrait was required of Vyner as Lord Mayor and that he lent his family portrait back to Wright, or another painter, to have the head copied with the addition of the Lord Mayor's robes. As you suggest, Richard, they could have put it together using an existing painting of the robes. Then some time later the portrait's identity was forgotten, Wright's family portrait not being available for comparison, and it was assumed to be Browne because he was also Lord Mayor at about the right time, when the inscription was added. I still think it should be renamed as Vyner!

I also have suspicions that the inscription doesn't ring true as a near-contemporary account of Browne and may not be as old as it appears. There seems to be a desire to cram in rather a lot of historical information.

Your suggestion about how the picture came about is very reasonable, although i think the identification with Browne could have arisen as much because it suited someone (eg to facilitate its sale or to fit it into a collection) as the result of a genuine case of mistaken identity. The inscription, I also agree, is nowhere near contemporary with the painting, but was added long enough after Browne's death for the study of his activities and achivements to have become quite highly developed. For presumably the author was relying on some published work of 17th century history. It seems from the summary of Browne's career that the person who chose this wording was less interested in Browne's mayoral role than in his career in high politics. I have no idea what that book might be, whether Clarendon or some county or family history, but it could add some useful knowledge about the painting to find out.

Could anyone add more to this discussion about whether this could be by John Michael Wright (1617–1694), following Dr Catherine McLeod's view that the style of drapery is consistent with his work? Timothy Noad noted (22/12/2014) that the head copied from the family portrait of Vyner might imply that it is 'studio of', rather than the work of Wright himself. R. Stephens suggested ‘circle of’, acknowledging the link with the Vyner head and the quality of the costume.

The collection hopes to begin an audit of the art collection in the near future, so if this does go ahead the curator could take photographs of the back of this picture. It is not easily accessible at present and is well wrapped due to poor conditions in the store. Should anyone be happy to visit to look at the painting, please let the curator know.

A portrait of this sitter attributed to John Riley was in the E Colville of Charllotte Street sale , Christie's, 20-21 January 1815 lot 16 bought by Adams

As I have been emailing a summary of submissions to the Collection today, I have asked the Collection if the audit of the art collection (see Dr Marion Richards, 17/10/2019) took place and if photographs of the back of the picture could now be taken.

could this be by Riley, whose work is far from fully established?

Richard’s comment dated 09/01/2015 was very interesting. I think the wooden ‘chariot wheel’ on the left was added when the (false) inscription was added. It is likely meant to represent the Worshipful Company of Woodmongers since the inscription notes that Browne was a member of the “Woodmongers’ Co.”. Here is a link to the arms of that organization from the Grosvenor Prints website https://tinyurl.com/2wnsu2dh. The arms include a wheel.

I don't think it can be that, I'm afraid. The person who added the (wrong and yes, much later) inscription clearly knew Browne's history in some detail, including his transfer from the Company of Woodmongers to the far more prestigious Merchant Taylors, which happened well before he became Lord Mayor; I hardly think the inscriber/artist would have alluded to his previous membership of the much lesser (and distinctly dodgy) Company unless he was trying to belittle him - and there's no sign of that in the wording. I suppose he might have been unaware of their reputation...but even so I don't buy it as a symbol of the Woodmongers.

First and foremost, it doesn't look like a wheel to me at all - the shape is too irregular, with no square edge to it, and with the brightness upped a bit (attached) seems to my eye to be part of the same shape that extends below it. And besides, the (spiked) wheel in the arms of the Woodmongers is just the attribute of St Catherine, who is the female supporter on the right - the male supporter on the left is St John the Baptist with his attributes (see https://bit.ly/3j6b91w). I very much doubt anyone would have extracted such an emotionally and religiously-charged object to symbolize dealing in fuel wood (albeit carried in carts) - you can see the two bunches of faggots in the escutcheon that do that.

I photocopied the record of this portrait from the file at the Witt Library back in the early 1990s. Someone had inscribed the mount "? J.M.WRIGHT", and it had been duly filed in the box for that artist. I had recognised the sitter as Sir Robert Vyner, having just been to a talk on him at the NPG. It is strange that someone back then had tentatively attributed the portrait to Wright, but hadn't recognised the sitter. It undoubtedly derives from Wright's portrait of Vyner and his family in the NPG, but could be by another artist.

I think that it is worth noting that Wright painted a portrait of George Jeffreys in 1875 (NPG), and painted another portrait of the same sitter a few years later (Philip Mould Ltd) in which the sitter adopts the same pose and is seated in the same chair, but the head and costume are very different from the earlier portrait. Another copy of the later variant (also NPG) is sometimes attributed to the copyist, William Wolfgang Claret (d.1706).

This demonstrates that Wright is known to have revisited an earlier portrait to paint the sitter in different attire, but also that copies of such works were made by other artists at around the same time.

Acquisition method
purchased with the assistance of the National Art Collections Fund, 1934