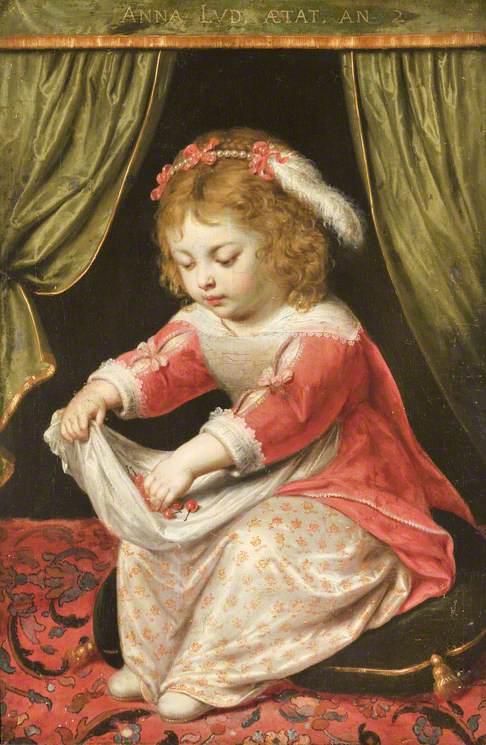 Stylistically there are strong similarities to Rubens’ pictures of children, especially in the face, which bears a resemblance to his drawing of a child wearing a pearl necklace in the Albertina in Vienna. https://bit.ly/2UAeBn9

The frame is inscribed ‘Lady Anne Egerton’ and ‘Honthorst’. There is a label ‘71’ lower left. The painting was bequeathed by Maurice Egerton, 4th Baron Egerton of Tatton, with the house, gardens and contents of Tatton Park.

Art UK adds: As a point of comparison, ‘An Oil Painting of a Young Child’, thought to be German 17th century, 15 x 12 inches, was offered for sale by Earle D. Vandekar, New York (sale date unknown). The sale record notes ‘A. Ferdinand’ in green paint on the backboard.
https://bit.ly/2EmOZpj

It seems a little too soft for Honthorst. I suppose one could think of one of the Leiden Fijnschilders.

I tend to doubt this is by Rubens. It seems too slick, glossy and highly finished, although certainly very accomplished and quite charming.

This is an enigmatic but I think exceptional painting, and I do think that it may be by Rubens. The inscription ANNA LVD who is aged 2 has until now been interpreted as referring to someone called Anna Louise (or Anna Louisa, Anne Louise, Anna Ludovica etc). Yet the Latin inscription, ANNA LVD, may also refer to the Anne who was ‘Anne of Austria’, eldest daughter of Phillip III of Spain and wife of the French King Louis XIII and mother of the French King Louis XIV (Louis the Great, the Sun King). This is because Louis XIV was also known as LVD. On medals that resemble this kind of inscription, for example, he was officially called “LVD. REX” or “LVD. XIV. FRAN. ET NAV. REX”, “LVD. MAGNUS REX CHRISTIANISSIMUS”. How he was to be called was much discussed, but a lot had LVD. https://www.persee.fr/doc/bsnaf_0081-1181_1969_num_1967_1_11790?q=les+portraits+de+louis+xiv+graves+sure+les+medailles

There are precedents, too, that his mother might be called ANNA LVD. For example, in a memorial of thanks to the Church of Sainte-Radegonde (Vienne, Poitiers) by Anne of Austria for healing her son, Louis XIV by the intersession of the Patron Saint of Poitiers, dated 12 Sept 1658, the crowned monogramme AL is repeated three times, representing the initials: “Anna, Ludovicus”. (Jacques JARRY Corpus des inscriptions latines et étrangères du Poitou. Tome 3).

Recall, now, that Anne of Austria was born at the Palace of Valladolid, Spain in 1601 and was living there when Rubens famously visited in 1603, at exactly the age when she was 2, as inscribed in this portrait.

If this hypothesis is correct, then the inscription would have to be much later (mid to late 17th century) long after Anne’s marriage to Louis XIII, and we can expect, too, the painting to have been adapted in some other ways, with perhaps the curtains being added, and even the silk skirt with its French royal “Fleur de Lis” pattern (that I suspect was the origin of Jacinto's concern with it being too slick, glossy and finished). Yet one might even imagine that Rubens adapted it while he was working for Anna of Austria in Paris later in their lives.

My earlier post on this portrait is probably wrong (sorry). This portrait is probably more or less what it says it is: a portrait of Lady Anne Egerton (as the frame currently suggests), as a suitable (and seemingly only suitable) ‘Lady Anne Egerton’ was one of the daughters of Lady Frances Stanley (Countess Bridgwater) and John Egerton, 1st Earl of Bridgwater (Bridgewater) who possessed the Tatton estate where this portrait still hangs. According to the frame, this painting depicts ‘Lady Anne Egerton’, and according to the portrait inscription, it depicts an ‘Anne Louise’ aged 2. ‘Lady Anne Egerton’ died on 27 December 1625 in her eighth year (i.e. aged 7 https://commons.wikimedia.org/wiki/File:Lady_Anne_Egerton_grave_1625.jpg ), so was thus born in 1618/19, and so would have been 2 in 1620/21. At around this date her mother sat for Paul Van Somer http://www.gogmsite.net/the_late_farthingale_era_fr/ca-1619-lady-frances-stanle.html
His portrait of her shows some similarities in style to this portrait, and as he painted other children of the aristocracy, he would surely be in the running as artist. Paul van Somer had come over to England in 1617 as court painter to James 1st and died here in 1622. The artist could not be William Larkin, as he died in 1619, and it could not be Honthorst (to whom this portait is currently attributed) as he had not yet come to the UK (and as his portraits have a very different style, to boot). Van Somer was a leading painter of the royal court, foreshadowing Rubens and Van Dyck in this role.
The composition in this portrait conforms with court portraits of this date - the framing in a black background between two curtains, the carpet with its overly-sheer perspective and so on were all classic to portraits by William Larkin and by some of Paul Van Somer’s as well. Van Somer painted portraits of courtier children, some of them very good. The freer painting in this work can be found in some of van Somer’s other portraits.
https://artuk.org/discover/artworks/lady-margaret-sackville-16141676-later-countess-of-thanet-aged-4-218964/search/actor:van-somer-i-paulus-15761621/page/3/view_as/grid Some of the lettering, too, is similar http://www.sothebys.com/en/auctions/ecatalogue/2012/old-master-british-paintings-day-sale-l12034/lot.202.html?locale=en
The dress in the portrait conforms with fashion 1600-1630 (and the sitter’s grandmother has a portrait of her wearing this c.1600, and Cornelis de Vos painted one of his children in the late 1660s wearing similar). The composition of the work is much less formal than most child portraits of the era, and is rather exceptional in that the sitter not looking at the artist, and this is what led me also to take the Rubens suggestion seriously. Yet the composition is not that different from several works by other Flemish artists, such as Cornelis de Vos, and anyway, Somer presumably knew Rubens and Vos.
Moreover, the sitter’s mother, Lady Frances Stanley, Countess Bridgewater, was an exceptional patron of the arts and perhaps seeking something a little more avant-garde. They were Royalty, really, as her aunt had been Heir Apparent to the throne. Lady Frances was the daughter of Ferdinando Stanley, the 5th Earl of Derby who was ‘Lord Strange’ and patronised the theatre company ‘Lord Strange’s men’ that performed Shakespeare’s plays and for which Shakespeare may have penned plays. Lady Frances was herself a huge collector plays, including of Shakespeare’s works, and was the first person known to have bound a complete volume of his (then) published works in 1602 (Lukas Erne, “Shakespeare and the Book Trade.”). When Lady Frances’ married John Egerton, she was in fact marrying her step-brother, as Lady Frances’s own mother, Alice Spencer, Countess of Derby (who herself was patron to the Derby Players), had married Thomas Egerton, John Egerton’s father. More on the relatives is at http://thepeerage.com/p1388.htm#i13880

Of course this could all be wrong too, especially if this Lady Anne Clifford did not have the second name of 'Louise' which I have to been able to ascertain. That would probably clinch it either way.

It is evidently by the same hand as another portrait of a child in this collection, a Boy called Lucas aged 6 months , which is virtually of the same size.
The sloping carpets suggest that the artist belongs to a more conservative tradition than Rubens

It certainly could be by Rubens. The rolls of hair..the layers of fat under chin, the light hand certainly reminds me of some of his works. Even dare I say...https://americanart.si.edu/artwork/portrait-rubens-wife-25177

Honthorst was used to disguise a Caravaggio 'The taking of Christ' (Winton House East Lothian) for export purposes from Italy in 18th century, so maybe this is the case for this Rubens?

The quality of this painting is way below Rubens's standard. Not even workshop. The loos style of painting is certainly Flemish and it can be dated on account of the dress to the late 1620s or early 1630s.

I think this could very well be by Cornelis de Vos (1584-1651), an Antwerp painter noted for his depictions of children (either alone or in family groups), who knew and worked with Rubens. Some examples of his work linked below:

I know I’ll be shot down on this, but I’ll put it out there anyway…. This may have something to do with Velazquez school, and particularly Juan Bautista Martinez de Mazo. If we look at Velazquez “Don Baltasar Carlos with a Dwarf” https://collections.mfa.org/objects/31124 we see the same carpet, the same sloped perspective on it, the same cushion and golden tassel, and similar curtain. We also seem the same writing saying much the same thing. And then the same cushion, tassel and costume appears in Velazquez’s “Prince Felipe Prospero, and the costume begins to look similar. https://en.wikipedia.org/wiki/Portrait_of_Prince_Philip_Prospero
Some of the painting is handled differently between all of these, and different hands are surely afoot in school paintings (and restored ones) and there is some confusion anyway in attributions between Velazquez and his most distinguished follower (and member of his school) his son in law Juan Bautista Martinez de Mazo. So if we look at Mazo’s painting of his own family we see very similar clothing again. https://en.wikipedia.org/wiki/Juan_Bautista_Martínez_del_Mazo If this work is linked to Velazquez’s Spanish school, then so, presumably, is its pendant. The boy called Lucas aged 6 months. https://www.artuk.org/discover/artworks/a-boy-called-lucas-aged-6-months-131447

Maybe James' suggestion shouldn't be ruled out altogether - the detail of the feather attached to one side of the hair immediately reminded me of that fashion in Velasquez' portraits of Mariana and Margerita Theresa.

Our picture looks much more Flemish than Spanish. The finish is much smoother and glossier, and the drapes much more precise. In other words, the work looks more artificial and less "modern." If anything, the work of Martínez del Mazo looks rather rough by comparison, and even Murillo is more earthy. I am not convinced.

Acquisition method
bequeathed by Maurice Egerton, 4th Baron Egerton of Tatton, with the house, gardens and contents of Tatton Park