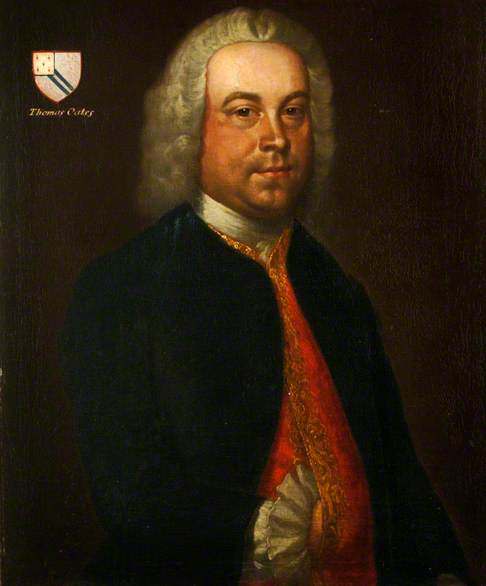 This could be possibly by Francis Kyte https://bit.ly/3EQwpkC

The link to Kyte (presumably) does not work.

If this is by Kyte, it is better than anything by or attributed to him on Art UK:

Jacinto, apologies, his dates were updated this morning. This should work https://bit.ly/300NpWc - David

The picture is very probably by the same hand as another portrait in this collection, also received as a git in 1954:

Jacinto, I think that is likely. Both paintings are on canvas and both are exactly the same width at 61.5 cm. I wonder whether the painting of Thomas Oates has been reduced in height by about 5 or 6 cm. It looks to me as if they were intended to be a pair of portraits of brothers(?) one of whom died at the early age of about forty years. So assuming the dates of birth and death of Thomas and Samuel are correct as recorded we are looking at two paintings dated I would think to the late 1740s. That would make Samuel no older than 28 when the work was painted unless the portrait of Thomas was not painted from life. But if the artist is Francis Kyte (c.1710–1745) that would make Samuel Oates no older than 23 years at the time of the portrait. He looks older than that to me which perhaps brings into question whether Francis Kyte is indeed the artist or if a date of death, or active date of to 1745 for FK, is in fact accurate.

Kyte was a mezzotint engraver active as such from the 1710s; he turned to painting portraits c. 1740. His prints are variable, but he was certainly a better engraver than painter. He was not born in 1710 but earlier. Both the NPG and the British Museum (who have prints by him) say he died in 1744. Thus, his dates on Art UK need to be modified accordingly. See below:

If he painted Samuel Oates, the latter could have been no older than 22 at the time, and his portrait in this collection looks older. I would favor that both portraits under discussion are by a minor/provincial hand, but probably a better one than Kyte.

The fullest account of Kyte is mine in the K G Saur Verlag, Munich multivolume Allgemeines Kunstlerlexikon on the open shelves in the British Library

I see that the will of a Francis Kyte, probably our man, was proved in 1744 Old Style, which is 1745 in the modern calendar. If so, 1745 is the reasonable date of death. I wonder what the Allgemeines Kunstlerlexikon says?

As to the portrait, I wonder which signed or documented portraits by Kyte were seen as comparable to our portrait and so led to this discussion being launched in the first place?

I must admit that i erred over the death date - good to get it right - my noyes on Kyte were buried by the lockdown . As far as I remember documentation and signture are very rare

For information, I am attaching the entry for Francis Kyte from Ellis Waterhouse’s Dictionary of 18th-century British painters.

Jacob, if the portrait shown in your link is by Kyte, then the portraits supposedly by him on Art UK cannot be, as they are too far inferior to it. The ones under discussion here are also not on that level.

The Handel portraits may be copies, and may not be his work. Waterhouse's illustration gives us a much better idea of the level of competence Kyte achieved. In the 1740s he practiced in Bristol. So it is not that surprising that some of his paintings , though inferior to George Beare , have some stylistic similarity to the work of the Salisbury artist. We have no sound idea as how Kyte painted before 1740, although he was described as a painter as early as 1725, the year in which he was imprisoned for forgery. When released, he hid his identity by signing his prinrs 'Milvius', the Latin name for a kite. Secure works are influenced by Hogarth. He painted George Whitfield [1743] , the type founder William Caslon , and the founder of The Gentleman's Magazine, Edward Cave [both 1740]
The Whitfield portraits of which images survive are neither by him, nor in his style

The picture in Waterhouse is good enough that it was once attributed to Gainsborough, which is very good indeed. Our portraits are simply not on that level, and the pictures listed under Kyte on Art UK are even less so.

I have attached part of the entries for Samuel Oates from the ‘Jolliff family tree’ on Ancestry. The tree shows Thomas Oates and Samuel Oates were brothers. Another Oates brother would be the George Oates (1717–1779) shown in another portrait in the collection. https://tinyurl.com/6rwxvthp.

The NPG portrait of Handel is signed and dated 1742, but it is a copy by Kyte of a portrait by someone else, which had been engraved by Houbraken and published in 1738. The original is lost or untraced, but the engraving (in reverse) is better than Kyte's copy. Again, something is clearly amiss regarding works by or attributed to Kyte. See below:

I think that Grant's point is correct and the pair of paintings cannot be by Kyte by reason of date. Are they by a London artist or a provincial artist?

Wikipedia states: "The Oates family were landed gentry, owning land around Leeds and Dewsbury since the 16th century." No doubt members of the family visited London from time to time but otherwise perhaps we are looking for a Yorkshire artist.

It is most likely provincial work, I expect, but it is better listed as British School than unknown artist, which is an unwieldy category.

Picking up on Marcie's post of this afternoon, for which thank you, the collection has a portrait of a third Oates brother, namely George Oates (1717-1779). It appears to have been painted after the death of George Oates (see the inscription upper left) and to be by a different and later hand than the portraits of Thomas Oates and Samuel Oates.

I would agree with that, Grant.

Is the artist possibly Hamlet Winstanley (1698–1756)? He lived in Warrington, Lancashire, which is much closer to Leeds than London. https://tinyurl.com/2xydpjvn

I fear that it'll be difficult to identify the artist.

A couple of points occur to me having looked at the collection of portraits of members of the Oates family held at Selborne. Firstly, quite a few were painted some time after the death of the sitter, probably from photographs in regard to those family members who died in the latter part of the 19th century and later, and for earlier relatives possibly from miniatures or drawings held within the family. Secondly, reverting to the central issue of the discussion, this family history of posthumous portraits is another factor in making me question whether the portrait of Thomas Oates was indeed painted in the period leading up to his death in 1750. It seems to me more likely that his brother Samuel Oates (1722-1789) had his portrait painted circa 1760-1770 and that the opportunity was also taken to commission a portrait of his older deceased brother Thomas Oates. The profile of the two brothers as captured by the artist is very much the same.

If this supposition has any merit, it doesn't help us in identifying the artist but it may assist in a revised cataloguing of the two paintings to, for example, 'British School, probably third quarter, 18th century'.

As this is very much your field of expertise may I suggest that I stand aside from this discussion and leave it to you in due course to recommend a conclusion in whatever way you feel appropriate?

Although Francis Kyte’s will was not proved until 22 March 1745 in our calendar, he had died the previous year, 1744, in Bristol, probably in November, as advertised in several London newspapers in December 1744. Clearly it took time to locate his will, which had been drawn up in 1734, and which was not witnessed, so necessitating the appearance of two individuals who knew his handwriting to confirm that this was indeed Kyte’s will. In the probate court reference was made to Kyte’s dying in Bristol so that there can be no doubt that the Probate Court of Canterbury will (copy in the National Archives) is indeed his will. So the correct year of death is 1744.

Two reactions to Grant’s helpful post of 7 November. Firstly, I don’t think the portraits are posthumous, although the coat of arms and inscriptions on some of the portraits appear to be later than the portraits themselves. For my part I would be happy with a date in the late 1740s for the portrait under consideration. Secondly, I contribute to the discussion as an individual, rather than group leader for this period, so it is not up to me to recommend closure.

Jacob, thank you. I am happy to make the recommendation for closure with the benefit of the guidance you have given.

so I did not get Kyte's death date wrong , after all

The dates for Kyte on Art UK still need to be amended as noted above.

This discussion has proved to be helpful in established a couple points which may assist the collection. Firstly we have ruled out Francis Kyte as the painter of this portrait. Secondly, the date of this work is thought likely to be the late 1740s, painted by an unidentified British artist, probably provincial. It is recommended that in respect of this work the 'Artist' description should be altered from 'Unknown Artist' to 'British School, mid 18th century'. Thank you to everyone who has contributed to the discussion.

Grant, I have asked the Collection to confirm if they are happy with proposed changes contained within your Group Leader recommendation. Regards, David

The Collection have commented: 'We're very happy for you to change the entry based on the discussion (which was very interesting!) We will amend our records here too.'