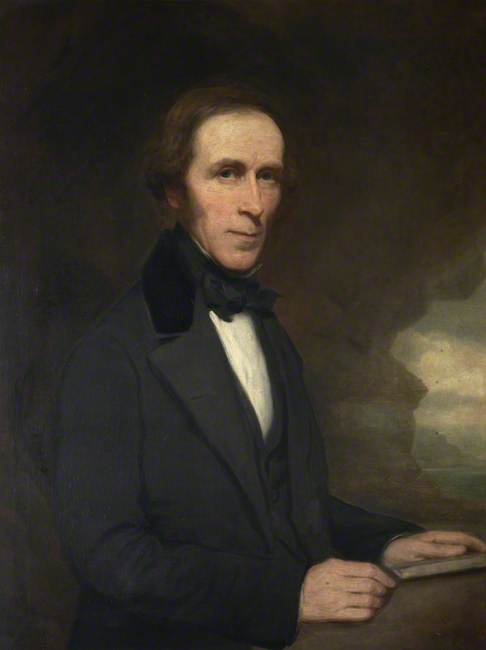 The collection do not have any information associated with this painting and there are no discernible signatures on the painting, nor labels on the back.

This discussion has now been closed. No clear conclusion was reached. If any contributors have new information about this painting, we encourage them to propose a new discussion by following the Art Detective link on the Your Paintings page:
http://www.bbc.co.uk/arts/yourpaintings/paintings/portrait-of-a-victorian-gentleman-148158

This man has a longer narrower face than in John Gibson's marble bust, in the several portraits of Eastlake in the National Portrait Gallery and in the oil portrait of him by John Prescott Knight in the collection of the Royal Academy

One for Susanna Avery Quash, surely?

I've notified Susanna Avery Quash to see if she has any comments.

I agree with Martin's comments above that the physiognomy of the sitter in the portrait is completely different from Sir Charles Eastlake's!

Apart from the Gibson bust that Martin mentions, most of the extant representations of Eastlake are brief sketches. There is a sketch by his friend John Partridge, made in Rome, another early portrait by William Brockedon, and some later cartoons by Charles Bell Birch and Charles West Cope (all now in the National Portrait Gallery, London - those referred to by Martin); quick drawings of Eastlake by John Hayter and Sir George Hayter (both now in the British Museum, London) as well as by Samuel Prout, perhaps made about 1838-40 (now in the National Maritime Museum); and a drawing by John Watkins and an official portrait by JP Knight showing Eastlake as President of the Royal Academy (both now in the Royal Academy, London). A pen and wash drawing of Eastlake produced by Sir Francis Grant in 1853 was presented to the National Gallery by Simon C Dickinson Ltd & Hindlip Fine Art in December 2011. All of these portraits show Eastlake with his quite round face, deep set eyes and distinctive eye brows!

While I'm sure the portrait under review is not Eastlake, I have no real idea whom it does depict. But I'll keep thinking.

Having eliminated Sir Charles Eastlake as an identification, we are now in limbo. If there is nothing about this image that can give some clue as to who it is or who painted it, it is not easy to proceed. It may well show some Plymouth worthy of c.1840, so is perhaps one for those with knowledge of Devon in the mid 19C to concentrate on. The view out to the seashore from a cave-like setting is an interesting choice. The book indicates a writer or scholar. Perhaps a geologist or man of science?

On that basis, there is a resemblence to Roderick Murchison - http://education.gtj.org.uk/en/item1/26473

Let's start from the point at which Barbara Bryant left off above - probably a Plymouth-based individual, possibly a writer, possibly with scientific and specifically geological interests. That, for me, suggests that this might be:

(i) a member of the Plymouth Institution (now the Atheneum) - Plymouth's own scientific institution
(ii) someone aged between 30 and 50 in the 1840s (very generous estimates here), so someone born within a decade either side of 1800
(iii) someone with interests in, and publications about, matters connected with one or more aspects of a broad range of natural history or scientific interests.

Another possibility is Jonathan Nash Hearder (1809-1876) an electrical engineer born in Plymouth who developed the Induction Coil. Attached is an article from the Western Daily Mail dated 13 Jan 1933 which states that there was a portrait of a Dr Hearder on the wall of the Athenaeum at Plymouth.
Note also the portrait on the BBC site of George Elliott Hearder of Torquay, very similar long thin face - could he be related?
http://www.bbc.co.uk/arts/yourpaintings/paintings/george-elliott-hearder-c-18101888

Thank you for these suggestions for possible sitters. We will look into this further and keep you updated if we make any discoveries.

Very early on we established that this portrait did not show Sir Charles Eastlake but who it is has remained unsolved. Without any more comments, it is probably time to close the discussion. We had a few intriguing possibilities among Plymouth worthies noted by Mark Gray and Paul Kettlewell. I don't feel Murchison is close enough. The Snow Harris suggestion fits the place and interests of the sitter, but there isn't enough to go on with the one image of this individual that is known. Ditto Hearder (the portrait of him that was in the Plymouth Athenaeum was destroyed in the Blitz though there may be engravings).

The face of the sitter is very distinctive. The physicist John Tyndall (1820-93) is of a similar type but he is on the young side for this portrait and sported a set of extraordinary whiskers for most of his life. http://www.npg.org.uk/collections/search/portraitLarge/mw115209/John-Tyndall?LinkID=mp04577&search=sas&sText=tyndall&role=sit&rNo=3. Also he had no close connection to Plymouth or Devon.
So lacking any more information about the picture (it's a shame there is nothing on the back that might give some lead), I propose that this discussion be closed.

Title
Portrait of a Victorian Gentleman