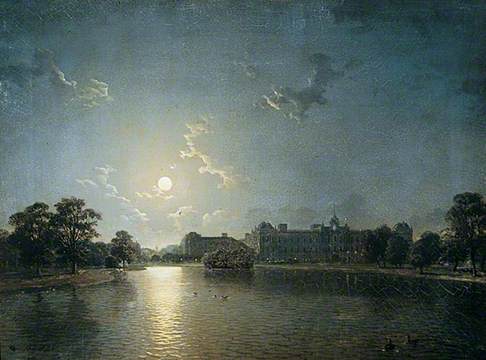 I think this painting has a good chance of being by Henry Pether (1800–1880). He specialised in moonlit scenes such as this (as did his father and brothers).

There are many examples of his work on Art UK, among them several famous London views: https://bit.ly/2T68sB2

Could be by Sebastian Pether or Abraham Pether, their works all look so similar.

It's difficult to tell from the painting if this is the pre-1828 Buckingham Palace or the newer one finished about that year where the side wings were added.

Is that a signature or initials in the bottom left corner? O perhaps it a duck. If not, could a hi-res image of that area be posted?

It shows the palace with the new East Wing completed - for Victoria to accommodate her growing family - around 1850. The ballroom wing, which dates from the same time, is also shown on the left.

I am sure this is 'Pether family': its just a matter of resolving which one. Copying the image and enlarging does not bear out there being either a signature (or a duck) lower left, unless under the edge of the frame: what looks like an inscription - which the collection would long ago have taken note of it it was - is part of the dark reflection of a tree from the rippling water.

We have had quite a few Henry Pether paintings and I would say this is definetly by him. He was the better of the three and would mainly paint actual places unlike the other two.
Abraham the father prefered places of his imagination.

The same collection has this by Abraham Pether:

I agree with Adrian (29.04.20). The Pethers always present a problem since, in style terms on an 'off' day, one can look rather like another: but Abraham generally does 'capriccio' views, Henry identifiable topographical ones, and Sebastian more of a mixture. It would at least be safe to attribute this one to Henry - though I would be specific too. The one in the link below -though not a very good photo - has similar cloud painting (and the water).

(Just as an aside, this was until recently wrongly identified as showing Tilbury, but as Adrian knows there is at least one other version: that's the 'at least one other' now mentioned in the Art UK caption. Even without it however there are plenty of other images of Crowley House, Greenwich, including a good photo taken just before it was demolished in 1855.)

If, as Al Brown writes above, this is a painting of a post-1850 Buckingham Palace, then it cannot be by Abraham Pether, who died in Southampton on Sunday 12th April 1812, nor by his son Sebastian, who died on the 18th March 1844 at York Cottage, Battersea Fields, London. His obituary, from The Gentleman's Magazine, July 1844, is attached.

Henry Pether, formerly of 6, Trigon Road, Clapham Road, Surrey, died, aged 80, at 26, Stockwell Green, London, on the 20th February 1880. He would appear to be the last man standing as a candidate, if this painting is by a member of the Pether family.

I'm not quite as sure as Pieter (09/01/2020) that the bottom left area requested as an enlargement by Kieran shows nothing of significance - that is, unless you've seen a higher-res image, Pieter - nor that the Collection would have spotted it before now if there were.

I attach a pair of tweaked images. Although one can't see much at this resolution, to my eye there looks to be a possible date (including a '5') preceded by a ?monogram. It may well be nothing (it usually is), but could we at least see Art UK's best image of that corner, please, Marion?

I've just had a long comment which refused to load, which a good thing as it made the same points that Kieran did but not as well.

Just to reinforce Al Brown's point above, this picture must date from after the removal of the marble arch at the front to Hyde Park in 1847 and the subsequent building of the new front of the Palace by Bloor in 1847 to 1850. Compare the 1842 (from a similar viewpoint) and 1850 illustrations here:

So, unless there's yet another moonlit painter hidden in that large if unfortunate family, even without stylistic grounds, this means it has to be Henry Pether.

It's odd that though Henry seems the best and most prolific of the three he also seems the least well documented (no Wiki for example). Most sources just give "(fl. 1828-1865)", though ArtUK gives (1800-1880) with no further details, which Kieran confirms and expands above.

On a good few of Henry Pether's works on ArtUK, and elsewhere, there is a signature and/or monogram on the canvas bottom left or bottom right. The hi-res image of the bottom left of this one could resolve the question as to whether one is painted here, as it did for the Abraham Pether discussion on 'A View of the North Front of Bower House'.

Yes, this does look like an interesting addition to the canon of Henry Pether. It will be good (if this proves beyond reasonable doubt to be Henry) to get his proper dates further on the record, as Mark noted they are often given as just fl. dates but Kieran has shown otherwise.

Henry did often sign his works. And apropos Osmund on the signatures, here a tweaked one (there are others from pictures that have gone through the salerooms).

In checking the canvas, it might be with looking out for the distinctive H with which he frequently starts his first name (as attached)

Even if a signature does not materialize, this can still be attributed to Henry Pether, which is perfectly plausible.

Thanks for the dates Kieran: I should have thought of that. Let's hope there's a hi-res image to resolve the sig/date issue or we may be waiting some time. (Though not for discussion here, at least two of the three 'style of' Henry at Brighton at the bottom of the Art UK list look much more like one of the other two by capriccio subject)

Thanks to all for their various contributions to this ongoing discussion.

There are several paintings in the Leeds Museums and Galleries collections by or attributed to members of the Pether family.

‘Country House across a Lake by Moonlight’ is not formerly attributed to a Pether but it is noted in on our collection database that it is a view of Buckingham Palace from across the lake in St James’s Park, prior to the addition of the Aston Webb facade and the Victoria Memorial. We have no plans to change the title of the painting at this point, as it’s title is quite possibly historic in origin and is consistent with it being part of the collections at Temple Newsam House and a ‘country house furnishing picture’. To assure contributors to the discussion there is no signature or inscription in either of the lower corners. My former colleague James Lomax who spent considerable time researching the paintings at Temple Newsam House didn’t find there were sufficient grounds for it to be re-attributed to Henry Pether. It doesn’t seem quite to have the quality of a Henry Pether autograph work and appears somewhat tentative and lacking in definition on closer inspection. The painting is on show in the South Passage on the first floor on the House for those who’d like to take a look at it once Temple Newsam reopens at a date as yet unknown.

The painting by Abraham Pether titled ‘Moonlight Scene’ is also at Temple Newsam House, though in store there.

‘Morning, with a View of Kirkstall Abbey’ , which came into the collection via the 'portal' of the Social History collection is now ‘attributed Henry Pether ‘(formerly Abraham) and re-dated to c.1850 (based on topographical information in the picture.

On the basis of the above statement, perhaps this discussion should now be closed.

At a minimum, the picture is style or manner of Henry Pether, and it could be listed that way short of an actual attribution, which would capture it on searches for the artist or his family surname.

Collections have a perfect right to make their own decisions. That said, if Art UK thinks the title it shows should mirror the collection's as 'Country House across a Lake ' (and I simply ask that as a question) that - at least on Art UK - 'Buckingham Palace Viewed from St James's Park' should also be included in brackets afterwards on its merits as including useful search terms. It is information the collection alredy knew but was not in any description supplied under 'more information' when it first came on line: what is there now is as result of this discussion.

As to artist I think it would be perverse - at least on Art UK - to leave this as 'British School', which is useless given that even if not by Henry Pether (which is a matter of opinion) it is certainly 'British School (circle [or 'follower' ] of Henry Pether'), both in terms of being a specific London topography subject and in manner.
It is certainly not by a follower of anyone else -not really even his father or brother given that date evidence already cited.

Barbara's call of course as this group's leader.

Pieter, I did find this discussion interesting and concur with everything you have said. It's not actually my group to close (Andrew Greg can call time), but I agree it would be perverse not to include some supplementary information as an addition to the collections's title. It seems most unlikely that it was ever intended to be called Country House Across a Lake by Moonlight (which sounds like an old auction sale catalogue title). Some additional information on Art UK, listed as secondary to what Leeds already have, would surely be beneficial for all.

Apologies for misattributing the responsibility but I'm glad you agree: one of the unarguable pluses of the internet is how it throws up associations which one would either not discover at all or often with difficulty by other means, entirely based on 'search terms', and the more specific and (within reason) numerously so, the better. Here that applies both to subject and likely 'circle of' artist, at least.

No doubt (Tim) it could, if there is the 'resource', to do it which is more doubtful. The key issue, however, in terms of public-enquiry utility is what are the searchable fields? In any online art database it's usually only 'current title' and 'artist' (plus media, date etc), not necessarily all the background details of previous titles and attributions buried in either an underlying collection data system or (still only) in paper files.

As the present example shows its quite easy to square the circle by the means already suggested - at least for optimum-benefit purposes on Art UK.

I am sorry for the delay. I have had no working computer for some weeks, now gone for repair. Thanks to everyone for their work and comments. On behalf of Art Detective, I would recommend that the painting is attributed to 'Manner of Henry Pether', given the comments by Leeds Museums and Galleries on its relative lack of quality, and that the title 'Buckingham Palace Viewed from St James's Park' would be more appropriate.

Christie's current online sale of 'British & European Art', 7-29 July 2020, includes a moonlit 'Horseguards Parade from St James's Park', catalogued as by Henry Pether, though not apparently signed. It is the same size as the Leeds picture and similarly structured: could they be pendants?

Good spot Richard. They do work well as pendants. I wonder if both are in their original frames, that would 'seal the deal'.

Description
The painting shows the palace with the east wing, designed by Edward Blore and built between 1847–1850.