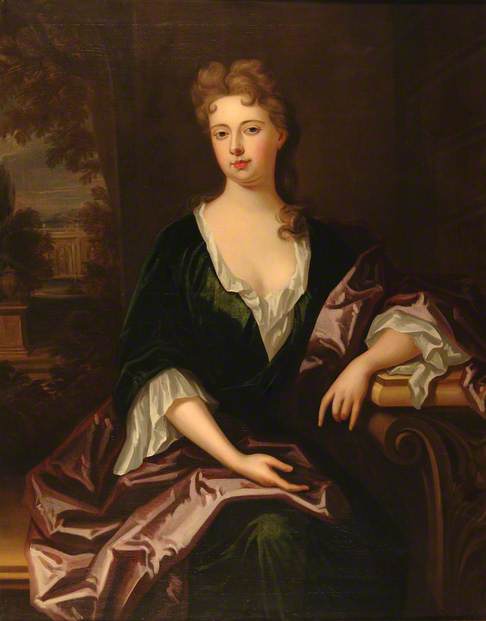 This portrait is highly reminiscent of known portraits of Sarah, Duchess of Marlborough (1660–1744), especially by Godfrey Kneller (whose style this picture resembles) https://bit.ly/3fC3g1z and https://bit.ly/3wjHCpf or possibly Michael Dahl.

The Collection has commented: 'We can certainly see that it resembles the features of Lady Sarah and given the period, she would be a good candidate for the portrait. We think the title should be updated [this has been done], but less sure about the potential attribution. We should seek corroboration from an expert in the period to advise.'

Dahl, of course, trained under Kneller and was obviously influenced by him.

Note the very similar pose to ours in the NPG portrait.

Just my very quick thoughts, having some experience with Dahl and Kneller. It looks more in the manner of Kneller, and possibly even after/by someone like Maria Verelst, who of course was influenced by Kneller and Dahl. It would be nice to see a better photo.

Maria Verelst seems unlikely--too minor for the sitter, who was probably only interested in front-rank names.

I'm clear that this is a Kneller composition, a studio work or copy, probably not by an identifiable hand. After Kneller, not after Dahl.

Yes, Jacob, I think after or studio of Keller is the most plausible attribution for multiple reasons.

If this is By Kneller https://bit.ly/3yI0XCQ.
Then None of these other paintings are.
But even this one is listed as after Kneller. Do we have anyhting That has been positively identified as Kneller. To compare too? Maybe Charles 11. https://s3-eu-west-1.amazonaws.com/lowres-picturecabinet.com/115/main/11/355671.jpg
But I do think they are all from the same studio. There appears to be some sort of thread running through them. They are all competent portraits.
But the One I first listed is the Kind of painting that might Obtain one a Tittle.
I will also point out that the Duchess and the Painter appear to like each other more than a bit. Which means she knows him. Which means it is probably Kneller.
My guess is he probably kept a record, somewhere. Tell me again Why we don't have an English Scholar who knows Kneller. And why he isn't talked of more. I'm a Yank I have an excuse. lol

For those of you still interested in what a Kneller that is an identified Kneller looks like well, here ya go. He was commissioned to paint these and it's on record. And I have to say even though I have never heard of this guy Wow Just Wow. The Next guy to capture people like this was Gainsborough. https://www.artfund.org/supporting-museums/art-weve-helped-buy/artwork/1531/portraits-of-members-of-the-kit-kat-club

Sorry for being Obsessive But here is another Portrait Positively identified as a Kneller. Lady Packington. It is gorgeous. Besides that, Check out her face in particular. Now check out the face by our unknown artist listed on this page. Our UNK is obviously a Pupil of Knellers. So if someone has a list of his pupils we could probably narrow it down to just one. https://a.1stdibscdn.com/archivesE/upload/a_3853/1464658510227/Kneller_LadyPackington_master.jpg?disable=upscale&auto=webp&quality=60&width=1318

To be clear, this does not seem quite right even as studio of Kneller. I agree that it may prove difficult to attribute to a specific hand.

Jacinto, in regard to Maria Verelst. Firstly, it is now accepted by the NPG that the Duchess of Marlborough was painted by Maria Verelst. For a detailed note on her iconography, please see the below link and look at the entry for 1722.

The relevant portrait is at Blenheim Palace, and there are also known variants/copies of it. So, it seems your assertion that Verelst is too minor an artist to have painted the Duchess is currently not well supported.

Secondly, the identity of the sitter in the Guildhall painting is still uncertain, so one should exercise caution in assuming otherwise.

I am only suggesting Verelst as a stylistic comparison to consider.

Thank you for pointing us to the NPG list, Andrew. I was not aware of the Verelst portrait, but note it was painted when Sarah Churchill was in her 60s and a widow, well past her heyday, when she had been a very important woman indeed--and when I expect "nothing but the best" would have suited her (which would not have been a young female painter b. 1680 of much lower status than Kneller). Before her fall from Queen Anne's favour, it is clear from the NPG list that Kneller was her preferred portraitist.

I do agree that, while the Guildhall picture is perfectly plausible as Sarah, it is not necessarily of her, and perhaps the title should be followed by (possibly) barring further evidence. The sitter's identity aside, it is also perfectly plausible as style or manner of Kneller, which I remain of the opinion is the most reasonable attribution, though you are naturally free to disagree.

Not the Duchess of Marlborough by her looks. The original of this portrait could date to the 1710s.

In my view this portrait is close to Charles D'Agar. I doubt it's the Duchess of Marlborough.

Did someone above mention Maria Verelst ?? If not the Duchess of Marlborough-who had a very different face-- has anyone noticed the similarity to the Art UK lady who holds the bowl with grapes and peaches and figs???

Charles d'Agar appears to have done better with male sitters; his female portraits are rather variable (which may be related to attribution issues). The one linked below is similar to ours in style, especially the handling of dress:

Can the building at left be identified? Could it be Blenheim Palace?

Jacinto- to me the building to the left looks like a one storey garden folly with statues in Niches.
A playfull thought has occured to me- the similarity in all these 18th century ladies portraits -- makes me wonder if artists went to the portrait wholesaler where they could buy a pre prepared canvas witha draped female body on. Just fill in the details .??? :-)