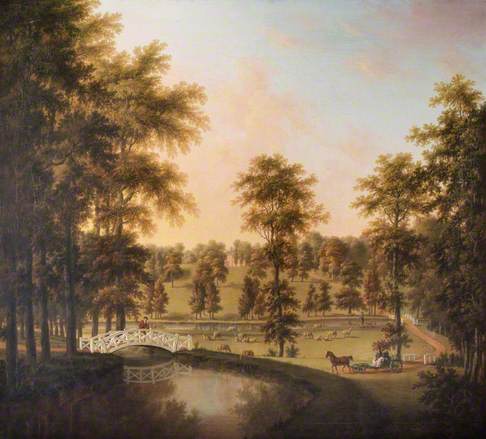 Has William Tomkins been considered as the artist? https://bit.ly/3ypZXSe He showed a view of Arnos Grove at the Royal Academy at the Royal Academy in 1774, as number 299 in the catalogue: 'Arno's Grove, the Villa of Sir William Mayne, Bart., in the county of Middlesex' along with what seems to have been a pendant (No 300: 'Ditto, looking towards Finchley Common') https://bit.ly/3Bhj7eV The style seems at least compatible with Tomkins, notably in the striking use of white objects in the green landscape, also seen in his views of Audley End.

The Collection has commented: 'We don't believe William Tomkins has been considered as the possible artist. We will carry out some additional research when we are next at our object store. In the meantime, if this work could be opened up for public discussion that would be helpful.'

It is certainly style of William Tomkins, albeit not necessarily by him:

However, given that Tomkins is known to have painted Arnos Grove c. 1774, an attribution to him seems reasonable.

An engraving of Arnos Grove in William Watts' Seats of the Nobility & Gentry, dated 1784, uses the same composition of bridge and water in the foreground. However the details of the bridge are different, and the house is shown much more prominently. Signed "W. Watts del et sculp".

The inscription on the Watts print, of course, indicates he was both draughtsman and engraver, and presumably drew the image on site initially. If he had made the drawing after a painting, the painter's name would normally appear at lower left just below the image.

Perhaps its worth reproducing the text to Watts' print, actually first published in 1779.

ARN?’S GROVE is situated at Southgate, a Village about ten Miles North of London. It was built by James Colebrooke, Esquire, and, at his Death, became the property of Sir George Colebrooke, Baronet, who greatly improved and modernized the Grounds.

About the Year 1777 it was purchased by the present possesor, who has likewise made considerable Improvements, and additional Walks in the Pleasure Grounds, which are now nearly three Miles in Circuit. The New River winds for upwards of a Mile through the Valleys, and having been, by Permisson of the New-River Company, increased in Breadth, has a very pleasing Effect.

The opposite Wing was finished by Lord Newhaven, who had the Estate a short Time before the present Owner.—It contains, likewise, an Eating Room, twenty-five Feet by twenty, and twenty high.—A hall, in the Center of the House, leads to the Drawing Room, which is thirty-six Feet by twenty-seven. The Staircase and Hall were painted by Lanscroon.

The Situation of the House is remarkably pleasant, commanding a View of several rich Valleys, with the Hills toward Finchly, Muswell Hill, &c."

The painting seems to how the relationship between the house and the New River much more accurately than the print. The New River (constructed in the 17th Century to bring clean water into London) was dug along the 100ft contour: I can't find a contemporary map online at a legible scale, but from descriptions the course through the Arnos estate ran along the south side of the property, along the north side of the valley of Pymmes Brook, crossing the brook via an aqueduct then doubling back along the south side of the valley. The river has since been straightened and the whole stretch obliterated. The house stood on the eastern side of the property, getting on for half a mile away from the course of the brook, at something of an angle to it.

Attached is an extract from a later map, with the house marked in red and the 100ft contour, and thus the old course of the New River, in green.

Description
The Arnos Grove estate was previously land owned by the nunnery of St Mary Clerkenwell, but passed into private hands after the Reformation. The estate and house was owned by the Walker family from 1777 to 1918. It also had part of the New River loop running through it, which is possibly depicted in this scene.