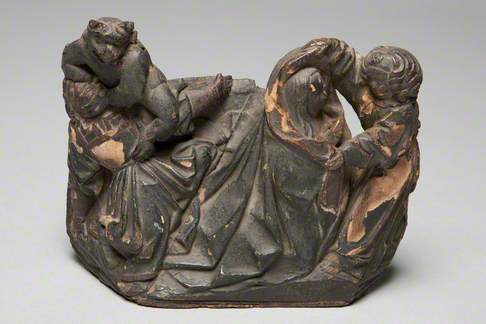 This appears to show a woman seized by a devil at left and another woman with hands clasped in prayer protected by an angel (?) at right. Presumably this came from some depiction of (or reference to) the Last Judgment. A better title might be ‘Two Women: The Wages of Sin and Virtue’.

It looks like a medieval misericord detached from its seat.

It was certainly attached to something, as the back is flat and uncarved (see image #4).

The given date is 16th C but I suppose it might be earlier.

A clearly related piece in the same collection is here:

It shows a monk, two men and a woman who appears to be a penitent. It was also attached to something formerly.

The problem with the misericord idea is that the top is not flat in either piece, as is typically the case.

This may have been part of a carved retable.

These are small carved groups, roughly 8 inches in greatest dimension. The presumed penitent in the other one might be Mary Magdalen covering her nakedness with her hair, though I also thought of Lady Godiva.

Is the figure on the left a woman? Aren't those a knight's gauntlets?

I agree with the carved retable. Both fragments could have been part of a retable to Mary Magdalen, although I can 't identify the scene just yet. Might be worth digging into Legenda Aurea.

Yes, the figure at left could be a man. I was going on what appears to be the skirt on the figure, but there are definitely heavy gloves.

Given that the male figure on the right of the second piece in the collection, as linked to above, appears to be soliciting the lady's favours with some object (a bag of money?), that piece might relate more to Saint Mary of Egypt, the 4th-century prostitute-turned-hair-covered-hermit, rather than Mary Magdalene. If the so, the monk that is directly behind her could be Zosimas of Palestine. As recorded in commentaries on her, in the 'Vita of St. Mary' it states that she often refused the money offered to her for her sexual favours, which she appears to be doing in the carving.

If correct, then the piece in this discussion might also be part of the same story, where a "before and after" depiction of her is presented, on the left as a bedevilled prostitute, and on the right being enveloped in Zosimas's robe to cover her nudity.

If the above is accepted as a possibility then, to answer the original query, the piece could be title thus:

"The nudity of St. Mary of Egypt being covered by the robe of St Zosimas of Palestine"

The male figure on the right, however, does not look as clearly like a monk as the obvious monk in the other figure (where I agree the female seems to be accosted by a man or men seeking sexual favors).

Also, Mary Magdalen was famously portrayed by Donatello as a hair-covered-hermit, reflecting a certain conflation of the Magdalen with Mary of Egypt:

As the attire depicted in both works is of a late-medieval style, the length of the robe and the open-toed sandals are very much what one would expect a monk to be wearing. As for the Donatello, was that the actual recorded identity that he attached to the work, or has it been incorrectly named as Mary Magdalene by subsequent generations of art historians?

Both women are treated here:

and even in the description of Mary Magdalene, the writer notes the unusualness of Donatello's version of her.

The question really is one of probability. Was Mary Magdalene ever depicted as being enrobed in such a way? Mary of Egypt has certainly been.

The two women appear to be rising from, or have risen from, their tombs. A devil (rather impish) captures one, while the other is protected (and clothed?) by a small cherub. It seems to fit the Resurrection/Last Judgement iconography, and the shape (and blank back) correspond to a group from a multi-scene altar-piece of the kind produced in very large numbers from workshops in the Netherlands in the 15th and early-16th centuries. It has evidently been painted over with a nasty 19th-century stain, not unlike a creosote. Individual fragments of these altar-pieces were circulating in thousands in the 19th century after so many churches in the Low Countries were closed up and their contents dispersed during and after the Napoleonic Wars.

Could its size and shape suggest it came from a misericord, as first proposed by Betty Elzea?

If Michael is correct, perhaps this piece is not as clearly related, thematically, as least, to the other in the collection.

The shapes are wrong for a misericord, which would probably be all wood (no gesso) and also tended to be more decorative or fanciful and less story-oriented.

It seems reasonable or plausible to identify the panel with the obvious monk, leering men and hair-covered woman as St Mary of Egypt, since the monk fits her better than it would the Magdalen. The panel with a figure seized by a devil and another being sheltered or saved is more in keeping with a Last Judgment scene.

I wonder if a better fit for the story of these two linked pieces is St Agnes. According to the Golden legend:

"Then the judge all araged made to take off her clothes, and all naked to be led to the bordel. And thus St. Agnes that refused to do sacrifice to the idols, was delivered naked to go to the bordel, but anon as she was unclothed God gave to her such grace that the hairs of her head became so long that they covered all her body to her feet, so that her body was not seen".

When she is in the brothel "the angel of God ready for to defend her, and environed St. Agnes with a bright clearness"[...] in making her prayers to God she saw tofore her a white vesture, and anon therewith she clad her" which could be conflated to the carving with the figure putting some covering around the praying woman.

In the brothel "At last came the son of the provost[...] advanced him for to take the virgin, and anon the devil took him by the throat and strangled him that he fell down dead". That's a pretty good match for what seems to be happening with the carving attached to it.

What this doesn't explain is the presence of the captive monk behind the woman with the hair in the other carving. The usual version of the legend doesn't appear to include any priestly mentor. It might be related to one of her miracles, but it doesn't quite fit.

I don't know if there was a medieval church of St Agnes on the Isle of Wight, though there is one dating from 1908:
https://en.wikipedia.org/wiki/St_Agnes'_Church,_Freshwater

That is very interesting, Mark, but as you note, the monk is out of place. However, he could simply be an anachronistic insert meant to show a monk pleading with the leering men to spare Agnes.

I hadn't thought of that, but it's a possibility, like a donor in a painting from about the same period. Usually they're not so actively involved in the scene though, just devout onlookers. But I suppose it could be like painting a Medici as a Magi.

It would also be of interest to know if the collection has relevant provenance information, specifically if these carvings came from a church on the island or elsewhere.

The Carisbrooke Castle Museum was set up to cover the history etc of the Isle of Wight, so I automatically assumed that the carvings would be local. But looking at the rest of the collection, it's clear, as with so many that start out to be narrowly focused, donations of non-relevant material have accrued over the years. Here for example is a statuette of a guard dog from North Africa:

though as it 'was found by' the notorious fabulist Richard Meinertzhagen, I suppose it's possible it really came from a souvenir shop in Ryde.

So thinking about it, it's very possible that the carvings aren't local or even English and instead could be from, say, Germany. That might explain the excellent condition they are in for their age, while the few British survivals of this type tend to have suffered.

For a museum that has always relied so much on volunteer labour, they do seem to have their information well organised - as you can see with the above entry or their excellent website (https://carisbrookecastlemuseum.org.uk/). So I suspect if they knew more, it would be there. But of course even the best kept archives can hide secrets.

It is entirely possible if not probable that these reliefs are not native to the Isle of Wight and that they may, in fact, be continental. I realise the collection may or may not have any more information, but I would still like to hear from them one way or the other.

Hi Jacinto,
Although the Carisbrooke Castle Museum is independently run it is sited within the English Heritage run Carisbrooke Castle, which is not due to reopen post Covid closure until July 4th. At present the Museum's contact email is not accepting queries.

The museum was founded by Princess Beatrice as a memorial to her German husband, Prince Henry of Battenberg. I suppose it is possible that these reliefs came from Germany via that connection.

Carisbrooke is open again, so could the collection be asked if it has any relevant provenance or other information in its files about the two carvings under discussion?

I did send an enquiry early in July asking whether English Heritage has any information about the provenance of the sculptures, but never received a reply. Unfortunately as leisure facilities have been included in the lockdown across England starting on Thursday 5th November, the Castle may be about to close again.

Thanks, Xanthe. I was not aware of a new lockdown and am sorry to hear there is to be one. I suppose this will have to wait.

Description
A carving of a woman and devil.