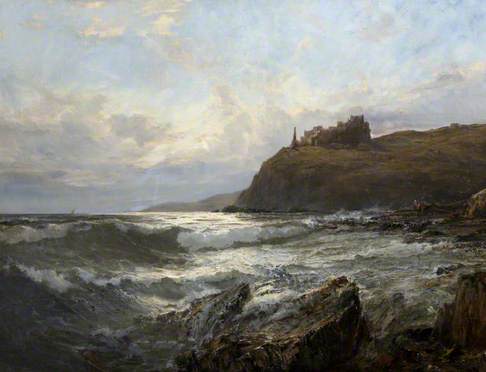 The 1909 Royal Academy catalogue and 1913 Christie's catalogue for the collection of George McCulloch both say Edwin Hayes did a painting just like this. It seems odd the son would repeat it.

The Illustrated London News from the 8th November 1890 describes Mr Edwin Hayes’s painting ‘Tantallon Castle’ (523) with the sea breaking on the rocks at its feet, at the exhibition of the Institute of Painters in Oil Colours. George McCulloch was buying plenty of pictures over the years 1890–1891 on his second trip to London, before settling permanently in April 1893.

The collection is unable to see a signature on the framed painting and would need to remove the canvas from its frame for further investigation to give a definite answer. It hopes to be able to follow up this lead, perhaps during the quieter winter months and will post anything found on this discussion. Any further information would be welcome.

Edwin does seem the more likely Hayes, but did Claude exhibit a Tantallon painting - and did he complete a painting begun by his father, left in his studio on his death in 1904?

The two men did exhibit together in the same show at Dowdeswell's in 1894 - Edwin marine paintings, Claude watercolours

It looks like Edwin, but removal from the frame to check the signature is an important requirement.

To concur with the above, it certainly looks very like Edwin and unlike Claude. Unusual but not unknown for Edwin not to sign although if this was exhibited, there is a greater likelihood of a signature, possibly under the slip?

There is no evidence in contemporary exhibition catalogues that the younger Hayes painted Tantallon , or even visited Scotland

Just to summarize, the evidence from the three catalogues (Guildhall Irish 1904, 1909 RA, 1913 Christie's) appears strong (size and likeness, especially per 1904 photograph) that the painting in the McCulloch Collection, Tantallon Castle by Edwin Hayes is the painting in Torre Abbey, currently attributed to Claude Hayes. The 1909 RA catalogue says the painting is signed but not dated "E.Hayes", so we need to see what may be found when the painting is lifted out of its frame.

Edwin Hayes always signed his paintings most unobtrusively, at the very base of the canvas, normally right (facing), often dark upon dark, even floating within a wave. Magnification of our painting appears to reveal a capital H in the bottom right-hand (facing) corner, very close to the edge; perhaps prefaced by an E? Study of his paintings shows slight variations in his signature, i.e. sometimes using an epsilon E, sometimes a usual E; normally in capitals but sometimes in script. Looking forward to a view of the un-framed picture.

Thank you, Antoinette, for providing suitable detail on the likely site of Edwin Hayes' signature. Together with Laurie's summary and help from other correspondents we now have good reason to request that the painting is removed from its frame as soon as possible for investigation. We will report on our findings as soon as we are able.
Jane Palmer, Torre Abbey

And thank you, Jane, for your response. I cannot emphasize enough what a difference it makes when the relevant collection shows an active interest in a discussion here. I understand that budget constraints make many feel they no longer have the staff and time to get involved, but it is terribly disheartening when we get little or no feedback at all.

Thank you for your kind response. We are very aware that our Master Catalogue on early acquisitions (from 1930) does have errors and we are always keen to help a discussion if we can provide an answer. In this case the information provided by all the participants has been most illuminating and an inspiration for the staff here (woefully few in number) to make the time to work on the painting which we intend to do soon.

The question as to the date of this painting also remains. Stylistically it looks a latish work. Hayes exhibited a Tantallon Castle at his one man show at the Dowdeswell Galleries in 1888 as no 59 . 1887-8 is probably the earliest possible date for the painting, but he painted the castle several times

Finding a date looks to be a tricky matter. Looking at the Irish and British newspapers there are Tantallon Castle's for Edwin Hayes as follows: 25 May 1863 Freemans Journal - Chromo-lithograph underway; 29 June 1868 Freemans Journal - No 291 Royal Hibernian Academy; 16 Feb 1889 Nation - No 140 RHA; 31 Oct 1890 The Times, Institute of Painters in Oils; 4 March 1895 Freemans Journal, No 115 RHA. George McCulloch was in London from 18 Oct 1887-cMarch 1888 & August 1890 - March 1892 & from April 1893 but his agent, Arthur Tooth could have purchased on his behalf at any time. The dates Dowdeswell 1888, RHA 1889 & Institute of Painters 1890 could all refer to the same painting but Edwin Hayes paintings seem to have sold quickly at exhibitions. He was a prolific painter with 670 paintings exhibited in London up to 1893 (Graves Dictionary of Artists.) Finally - Thank you Torre Abbey for fueling this discussion by responding the way you have.

Torre Abbey is glad to let you know that we have now had the chance to remove Tantallon Castle from its frame and inspected it for a signature. Despite the helpful comment from Antoinette Gordon on signatures and asking several colleagues to check the canvas we have been unable to find any signature at all. Hopefully the attached images may help redress this. Although the painting was cleaned in 1981 the images are rather dark, particularly towards the lower edge. Apologies for this. If any of the correspondents above would like to view the painting in person we would be able to offer this during the winter months by appointment.

Claude Hayes is mainly a watercolourist and not at the top of his league, although perfectly competent. His oils are much loser and more impressionist in style. If it is between the two, then the only artist could be Edwin Hayes.

Thanks Torre Abbey. Signed or not, your painting is the same one illustrated in the 1892 British Art Gallery Melbourne catalogue, 1904 Guildhall Irish Painters catalogue & the 1905 Great Pictures in Private Collections. The latter two link the picture to George McCulloch's collection. Its the correct size at 41 x 54 1/2 in. The 1909 Royal Academy catalogue says the painting is signed "E. Hayes" but does not all the evidence point to the Torre Abbey painting being that from the collection of George McCulloch unless it is the 'finished sketch' which also came out to Melbourne later in 1893. Unfortunately due to distance unable to take up Torre Abbey's offer to view Tantallon Castle. Laurie McCallum, NZ.

This is an old discussion which I have been prompted by Art UK to make a recommendation on (not having seen it before). It certainly contains much information on Edwin Hayes's treatments of 'Tantallon Castle' but not quite nailing this one down to him owing to lack of a signature. The view of participants so far, however, seems to be one of choice between Claude as current 'attributee' and Edwin (i.e no-one else) with the weight of evidence and opinion in Edwin's favour despite the absence of a signature.

It does not seem to be the painting in the Royal Anglo-Australian Exhibition of 1892 at Melbourne, illustrated on p.5 of the supplement to 'The Australasian' of 5 March 1992 (as crucially pointed out by Laurie McCallum) and which -though with no useful commentary in the text - is here:

That image, however, is from what looks like exactly the same low shoreline viewpoint and looks pretty convincingly like another version. Despite the imperfections of the reproduction it also has a clear and large signature at lower left which suggests it might be a smaller one. The other puzzle is that what is a spire to left of the castle here, looks more like a tower there, but versions are versions and the shoreline rocks below the castle crag also differ in scale in both.

Taking everything produced so far, and having looked at such images of both artists as are on Art UK - I think it is probably safe to recommend that Claude (very likely just an old error) be changed to Edwin as the artist, though the decision remains with Torre Abbey -including whether they would prefer just to attribute it to him.

I don't see a lot of either painter (though certainly more of Edwin than Claude) so this is more a 'circumstantial evidence' rather than 'style' call because it has been put in the 'maritime' box.

Acquisition method
on loan from Dr Moore, since c.1957

Description
Claude Hayes was the son of marine artist Edwin Hayes. After running away to sea, Claude returned and exhibited his first painting at the Royal Academy in 1876. Tantallon is perched high on rocks overlooking the Firth of Forth. It was the stronghold of the Douglas Clan, Earls of Angus. The clan sold the castle in 1699 and it fell into ruin.