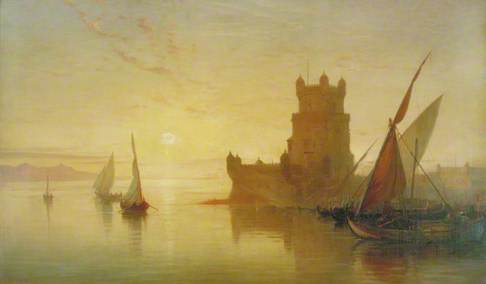 Was this painted considerably later than c.1850? For the artist exhibited 'Belem Castle, Lisbon' at the Institute of Painters in Oil Colours in 1889–1890.

The Collection has commented: 'Nothing in current records contests the date, but we are unsure about why it’s 'circa’ 1850'. Possibly it was just exhibited later than it was painted, but given the uncertainty of that 1850 date, it's worth us trying to establish how it came to be in the 1889–1890 exhibition if possible.'

Is it signed Frank Dillon? It certainly seems to be of his quality and subject matter. I think you can ignore the c. date. It seems to have no relevance.

While I do not know when Frank Dillon created this work, here are some possible reasons for the choice of a c. 1850 date:
- A Lot Essay about a Frank Dillon work on the Christie’s website states: “He sent his first work, a view of Lisbon, to the Royal Academy in 1850 and subsequently became a regular exhibitor both to the RA and the British Institution.” https://www.christies.com/en/lot/lot-3008578
- His paintings of Madeira were included in his book “Sketches in the island of Madeira” (1850). They are at this link on the website of the Yale Center for British Art. https://tinyurl.com/sv82k48
- An article in the ‘Antiques Trade Gazette’ discusses his paintings of Madeira from 1849. https://tinyurl.com/4a4jm3ke

THis has been hanging around for some time without a reasonable conclusion, which I suggest should be as follows.

Dillon's Lisbon view at the RA in 1850 - his first entry and the only Portuguese subject he ever showed there - was just 'On the Tagus, Lisbon' which his ODNB entry says was exhibited by ' ex P. Polak, 1966' (i,e. at the Polak Gallery ?). That suggests it was than still in trade circulation while the present picture has been in the Guildhall Collection since 1911. There is also an 1879 reference to an 'Evening on the Tagus' as being one of his better known works at that point : see here, in the lower quotation

In 1850 he was 27 and published his 'Sketches' in Madeira, which may have been how he passed through Lisbon and got the sketches on which he based later work, but this has the look of late- rather than mid-century topography and mature style. Its also a large canvas - over a metre wide - so, if an exhibition piece, the sort one would expect of an established painter.

A 'Tagus'/ 'Evening' title could clearly encompass the present subject but it's a vague one given that he was very specific when he showed 'Belem Castle' at the Oil Painters in 1890. We can't prove it is that picture but it seems reasonable to conclude it is one of apparently few Lisbon pictures that he did (most of his oils are of elsewhere) and more likely to have been painted later than c. 1850.

I suggest the collection and Art UK drop that as execution date. 'More information' could note that he was probably there in the later 1840s in transit to/from Madeira and appears to have subsequently done a few Lisbon subjects, probably based on sketches taken at that time: these included an unspecified Tagus view at the RA in 1850 and an 'Evening on the Tagus' (possibly also the 1850 picture) noted in 1879, but that this is more likely to be the 'Belem Castle' of 1890.

Pieter, I will follow up with the Collection now about this. David

The description on the Collection’s website is “ "Lisbon - Castle of Belem"; showing a castle by water with boats and the sun low in the sky.”

The collection can choose its own title though in English its usually called either Belém Tower or the Tower of Belém - one of which is how it usually appears in the captions of historical prints - the latter being literal translation of the Portuguese 'Torre de Belem'. Its official name is Torre de São Vicente (Tower of St Vincent) though I didn't know that until I just looked it up so its probably not the one to use in a title.

There is a reference to Dillon's 'Evening on the Tagus' (mentioned above by Pieter) at the British Institution Exhibition (no. 425) in 'The Art Journal' of 1855. "The subject is Belem Castle, with craft, presented under an aspect of sunset." I have attached the front cover of the publication and the relevant pages.
https://tinyurl.com/52j6fsxb

Well found: earlier than I expected but clearly a possibility, and almost certainly the 'Evening on the Tagus' mentioned as 'well known' in 1879.

Also in the Brighton Gazette 22 Feb 1855. “Evening on the Tagus, by Dillon, is poetical and successful in treatment; it is the first performance we have noticed by this artist.” There seems to be increasing circumstantial evidence that this is indeed the painting Dillon exhibited at the British Institution in 1855.

For completeness, I have attached an article from the ‘Portsmouth Evening News’ of April 10, 1911, that mentions the donation of this work. The Collection shows the title as 'View near Lisbon' whereas in the article it is 'The Castle of Belem, Lisbon'. It is interesting that the donated watercolour, ‘Sunset at the Pyramids’, also depicts a sunset.

The donor mentioned is possibly Walter Morrison (1836-1921), successful businessman, less successful Liberal politician and a notable public benefactor, though not primarily in the arts: he had connections with Ruskin and other cultural figures and his travels included Egypt. He has a substantial entry in ODNB.

I thought perhaps the two donated works were in the Christie’s sale of Frank Dillon’s works on January 21, 1911, but they cannot be item #38 if the painting of the pyramids was a watercolour. Note, too, item #53. The dimensions do not exactly match this work.

I have attached the relevant pages.

A very fast BNLA search while briefly in the office today produced no mention for 'Belem/Belem Castle' and 'Dillion' for the work exhibited in 1890, but others may have better luck. He also only showed one work at the RBA, in 1851: 'Watermill in Madeira'.

The attached article from the ‘Birmingham Mail’ of Monday, March 30, 1891, mentions Dillon’s work ‘Belem Castle, Lisbon’ at the Spring Exhibition of the Royal Birmingham Society of Artists.

I have attached the relevant pages.

Unfortunately 'sunset' (1855) and 'hazy heat' (1889) are equally applicable and the BI entry for the former does not include dimensions. Could the collection report if there are any labels or other marks on the back (dated or not): a snap or two of the frame might also help. Even if we get no further its an advance to have it fairly firmly as either exh. BI 1855 or [R]OI '89. It seems a little unlikely they would be the same picture, but if he still hadn't sold the latter by 1891 I suppose it's possible he'd had it hanging around that long.