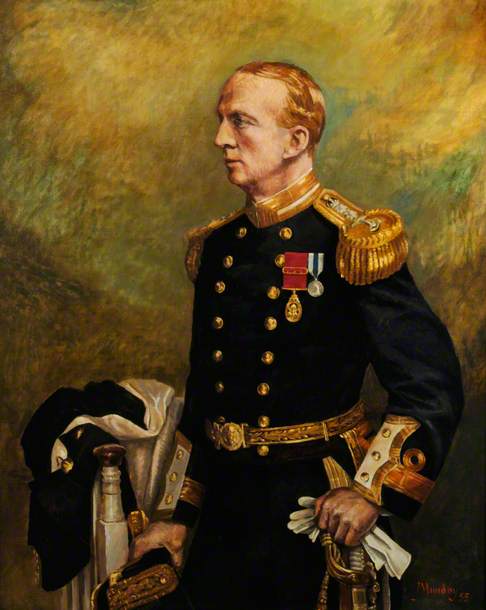 Could this be by John Munday (who died in 2012), who was for many years a curator at the National Maritime Museum?

This discussion is now closed. The painting is confirmed as the work of John Munday (1924–2012), and more was found about the sitter, Sydney Stewart Hall.

This amend will appear on the Art UK website in due course. Thank you to all for participating in this discussion. To those viewing this discussion for the first time, please see below for all comments that led to this conclusion.

Pieter van der Merwe, would you please be able to comment?

Is there a date? Those look like a commodore's sleeve, which would date the picture to between 1915 and 1919, before Munday was born. But it might have been painted retrospectively.

Apologies - I see there is, and that it was retrospective.

He was then appointed Commodore, First Class on 1 January, 1918.

Yes: I'm sure this is by John as I have a memory of seeing either a B&W photo of it or the B&W on which he based it at about the time he died, when I wrote his obituary in the 'Independent' (which is easily found online) but I will check with his widow. The following are his CV basics extracted from the tail end of the NMM catalogue entry on his 1950 picture of HMS 'Calliope' in the Tyne ( BHC4246): '....John Munday (1924-2012). After leaving the Northern Grammar School in Portsmouth at 16, he worked in the City Library there until called up into the Navy in 1942 and was demobilized at a sub-lieutenant in 1946. He then attended King's College, Newcastle, to study fine art, where one of his teachers was (Sir) Roger de Grey, later President of the Royal Academy. This picture [Calliope] was painted in the year he gained his BA there (awarded by the University of Durham). He then joined the Museum in 1951, originally as its Librarian, and retired as Head of its Department of Weapons and Antiquities in 1984. At Greenwich, Munday became the great authority on the work of the Victorian marine painter E.W. Cooke, gaining a Durham MA on him in 1961 and publishing a definitive study in 1996. He also continued to draw and paint for pleasure all his life, including as a copyist of historical works. His copy of the Museum's 'Portuguese Carracks' (BHC0705) is in the maritime museum at Lisbon and one of the 'Battle of Lepanto' (BHC0261) in that at Barcelona. He died at Alresford, Hampshire, on 20 April 2012. [PvdM 7/12]' The 1955 date on the portrait is fine and I presume the Submarine museum asked him to do it, though that's TBC: he was a good copyist either from existing pics or photos though the only other copy portrait I know is a head and shoulders of Admiral Lord Duncan, after the Greenwich version of Raeburn's full-length, which he painted for the Trafalgar Tavern at Greenwich in the let 60s/ early 70s and is still there. The one of Frank Carr, NMM's second director, which is among the four works so far listed for him on Art UK - but with this one it should be five -was probably from life since he was recruited under Frank (retired Dec. 1966) and knew him well - as did I rather later.

Attached is a not very clear image of his reduced 'Admiral Duncan', screen-grabbed from the pub's excellent website (with thanks). There are a number of versions/copies of this work, the original being at Trinity House of Leith: http://bit.ly/2dVzKog

Brenda Munday confirms the above is by John: she can't recall exactly who commissioned it (as a posthumous portrait) but it seems to have been for the Submarine Museum and the sitter's family were there when it was unveiled: John -working from a B&W studio photo- was apparently told that Hall had sandy hair and pale colouration and when his son -who was much the same -turned up at the event said it would have been useful to have met him earlier rather than trying to get it right it sight-unseen; but fortunately he did and the Hall family were very pleased with the result.

My apologies to NMRN for saying, just as a slip, 'Submarine Museum' (ie Gosport) etc above - which I don't think even existed in 1955 when JM painted this, though NMRN did from the 1920s in its earlier incarnations as the Victory Museum/then RN Museum - which makes even more sense in the John Munday connection. First because of its long links with NMM - which as the Victory Museum it predates, its founders (all stalwarts of the Society for Nautical Research, est. 1910) being substantially the same; and second because- just before he was demobbed in 1946 - John (a Portsmouth man anyway) was assigned to 'fire-watch' duties or similar on HMS 'Victory' in her dry-dock just alongside. She was then, as still, formally the flagship at Portsmouth, and during most of WWII that of the charismatic and popular Admiral Sir William 'Bubbles' James, his lifelong nickname deriving from his being the model in the 'Pears Soap' image by Millais (his grandfather). I think James - a good naval historian himself- had gone by then but John was there, as I recall, with the (subsequent) naval historian Richard Hough as another junior officer, and the associations certainly bent his own career towards what it became.

With that gloss, and at risk of treading on the 'portraits' patch, I suggest the artist attribution is firmly changed to 'John Munday, 1924 -2012' which is the answer to the original question, and this discussion wraps up.

The collection have been contacted about this recommendation.

Acquisition method
on loan from the Royal Navy Trophy Centre

Description
Sydney Stewart Hall (1872–1955), CB, Royal Navy became the Royal Navy's top submarine officer as Commodore in February 1915, then appointed Commodore, First Class in January 1918. He was promoted to the rank of Rear-Admiral in July 1919.