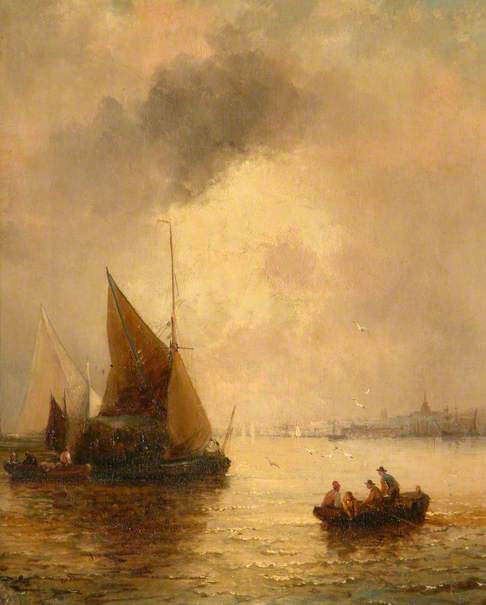 Previously titled 'Fishing Boat Scene', this painting is now known as 'Thames Barges off Tilbury with Gravesend in the Distance'.

See the previous discussion, 'Does this painting by Georges William Thornley depict a view of Scarborough Bay?': http://bit.ly/22kyv6P

This discussion is now closed. The artist has been identified as William Anslow Thornbery (1847–1907), who also signed 'Thornley’. The Art UK record for this painting has been updated accordingly and the new information will be visible on the website in due course.

This is almost certainly by William Thornley . I've cleaned and restored enough of them in my time.

Thanks for that practically based comment, which agrees with my original suggestion that it might be by W. A. Thonbery/ Thornley of Gravesend (i.e the same man, 1847-1907, since he seems to have signed both ways. I did not intend to bring Charles Thornely in, which is an editing misunderstanding.) If you have any thoughts on those raised via the other discussion that might also be useful.

This seems a straightforward identification case in the light of related discussions: the artist is beyond reasonable doubt the following - who also signed Thornely - and whose biography I copy from there (see link above).


William Anslow Thornbery (1847–1907), coastal marine painter, was born in Preston, Lancs, the eldest son of George Richard Thornbery (b. c.1820, a clerk/book-keeper from a professional Worcester family), and his wife Martha, née Anslow (m. at Kingswinford, near Dudley, in July 1846). William was baptized at Preston in September 1847, with three further sons baptised there, 1850–52. The family does not appear in the 1851 census, but in 1861 (recorded as ‘Thornley’) they – including William – are still at Preston, where George died four years later. William disappears again in 1871 (though one of his brothers was living with an uncle in Edgbaston, Birmingham), but in September 1873 he married at Aston, Birmingham, to Emma Starling, daughter of a fairly well-to-do grocer: his residence was also then in Birmingham and his profession stated as ‘artist’.

They had one child, Annie, born at Birmingham at the end of July 1874: the August baptism records William as ‘artist’ but Emma died in March 1876. However, it was not long before he found solace with her elder sister, Eleanor (nine years his senior): she needed it herself, having in 1871 divorced the husband who ten years earlier had deserted her and their two year-old daughter (three other children had died in infancy). William and Eleanor unsurprisingly moved away from her family in Birmingham to London, where their son, Walter Percy, was born at Barnsbury late in 1877. In 1879, at St Pancras, a safe distance from those who knew them, they took the serious risk of getting married: between 1835 and 1907 marrying your wife’s sister was a criminal offence as well as against canon law.

In the 1881 census, William A. Thornbery, an ‘Artist, Oil Paintings’, was living with his family at South Hill Road, Gravesend. His daughter Lily Maria, was born there early in 1880: she, too, became an artist of marine subjects albeit so far practically unknown, and died in Paddington, London, in 1964. The house, 140 feet up Windmill Hill, had (and still largely has) a fine view across the Thames to Tilbury Fort and Marshes. By 1891 they had another child (Howard, b. 1881), and were still in Gravesend, but in a small terraced house, 163 Old Road West, with no view. The spelling this time is ‘Thornbury’, and William is a ‘Marine Artist’. In the 1901 census they are called ‘Thornbery’, the 21-year-old Lily being noted as an ‘art student’.

Thornbery seems to have avoided showing works at major exhibitions in London, although (as W.A. Thornbury) he had a ‘Moonlight’ at the SBA in 1883/4 and two, of a ‘Misty day in the Pool’(presumably the Pool of London) and a ‘Sunset in the Pool’ in 1886. He appears in the index of artists in ‘The Year’s Art’ from around 1898 and exhibited at the Royal Hibernian Academy about 1900, and two works in 1903 and one in 1904 at the Royal Cambrian Academy, Conway (which spelt his surname as ‘Thornberry’).

Thornbery died in January 1907 in ‘London City’ (a registration district that comprised the old City with a few small adjacent areas) though the GRO index lists him as ‘Thornberg’: he was buried at Manor Park Cemetery, Newham, on the 14th. By the time of the 1911 census his widow, Eleanor (d.1929), was living in Hampstead with Howard, who later moved to Australia, and Lily, whose occupation is given as ‘Marine Artist’. If she painted in her father’s style it is possible their work could be confused, though hers is barely known: in 1904, however, she exhibited a single work (‘Dawn’) at the Royal Cambrian Academy from her father’s still unchanged Gravesend address. Much difficulty has arisen from confusion of Thornbery’s name as Thornbury or Thornely, and of him with Charles Thornely (1832/3–1918), who is also often misleadingly called William or William Charles. He appears to have reinforced the problem by sometimes signing ‘THORNLEY’, with a slightly larger T overlaid centrally on the H, for reasons on which one can only speculate.

May we now prompt closure on this, with the artist identified as Wiliam Anslow Thornbery, or 'attributed to' him if the collection has doubts-though I don't?

Edward, has the collection commented on Pieter's recommendation? I support his comments 100%.

I hate to say this- but the big boat in the forground does not look like a Thames barge- more like a small Dutch Barge -the shape of the bow and the rising up angle of the bowsprit are so not Thames Barge like.I was looking at a similar small Dutch Barge in Woodbridge last saturday-and there is also one occasionally in the Ipswich wet dock.( er sorry-Historic watrfront as we are supposed to say these days)

To repeat the comment which seems to have disappeared above, I think 'Dutch appearance' is an illusion from the image - subject to a closer look. The bow form is none to clear but the brown-sail ketch rig (with sprit mainsail and adjustable bowsprit) is consistent with a Thames hay barge -which typically brought that inward to London on deck over heavier hold cargo. This one looks like it has a load of hay on deck under a canvas cover, with the sail brailed up above it. The helsman of course had no view ahead so was passed directions, often by someone sitting on top or forward of it. One can only see the white mainsail of whatever is behind, but that is also consistent with being anonther similar barge. The current title is sound but still needs the artist update added.

All boats had similar rigs- but the boat in the painting looks nothing like a "stackie" -see link below.And as I have seen Thames Barges all my life the difference in the bowshape is glaringly obvious.Here is picture of small Dutch Barge "twe gebruder" in Woodbridge this afternoon- which shows the snub nose bow and high angle bowsprit quite clearly.

I'm sorry but in the picture we are looking at a barge with a 'Thames' ketch rig, like the very heavily laden one you illustrate from astern, with no cabin and - it appears - a small load of hay on deck. Its also low in the water, which may suggest heavier hold cargo below -inbound Essex bricks being a traditional one: most Thames barges one sees today are riding higher than when in fully loaded working use. I take the point that the bow is questionable in shape but some had bluff stem heads and some swim (dumb lighter) heads and the question is perhaps more as to which of those it is: both could have bowsprits for an outer jib. The current picture is not clear enough to say 'its Dutch' but if the collection can provide a more detailed photo we can look at it again, though I will be surprised if that gets us beyond 'barges' or 'sailing barges' as a more cautious alternative.

Irrespective of the country of origin of the barge is the distinctive skyline in the background part of Gravesend as suggested.

Not sure if that is a question or a statement, but it is certainly Gravesend!

The collection has agreed to close this discussion.

Pieter, would you still like to close this discussion? I am checking because further comments follow your recommendation to the PCF, e.g. 'if the collection can provide a more detailed photo we can look at it again'.

Yes please, with the title to stay as it stands and the artist down as William Anslow Thornbery (1847-1907) who also signed 'Thornley'. The photo issue was about exact hull form, and whether Dutch or English, but I am sufficiently convinced they are local Thames barges.

Title
Thames Barges off Tilbury with Gravesend in the Distance