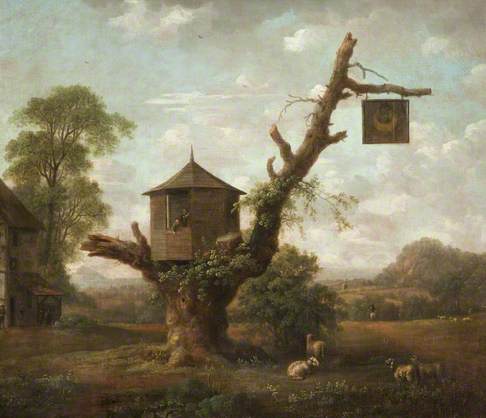 Does anyone know if this pub in a tree really existed? The painting description notes that the collection is unsure and suggests that the artist might have copied the scene from a Dutch painting. However, it also mentions that the artist, Anthony Devis, settled in Surrey in 1780, so the pub might have been there.

It cannot be confirmed whether the inn existed or its location, therefore the title and description will not be amended.

Devis lived at Albury east of Guildford. An expert on Surrey topography could probably recognise the prominent hill on the left, which would narrow down the search . Is it the hill on the Hampshire border near Haslemere? Its name escapes me at the moment. Or is it Boxhill, perhaps more likely?

The route of the London to Portsmouth road might be a good place to start. Hindhead was the name which escaped me. There must have been inns at regular intervals on the road to Portsmouth at the end of the 18th century.

There were quite a few establishments called the 'Man in the Moon' at this time - three (at least) in London: Chelsea, Southwark and just off Regent Street. If this is a 'real' location, I would think that the inn was the building on the left and the tree house was a gazebo type out-building. The road appears to go to the right of the tree, so it would be better to put the sign there, rather than hidden away on the main building. An 'inn' would suggest it had rooms to let, and unless the tree house is a tardis, I can't imagine anyone bedding down there, especially in the winter!

Many of the Inns names morphed to the 'half moon', 'man on the moon' etc.

Surely the Pub is the building to the left. And the hut in the tree- looks a bit like a camera obscura to me- which was a popular thing 2-3 hundred years ago- and up a tree to get a better view.

I think it is unlikely to have been a camera obscura. It's surely a real scene, though, as it is too eccentric to be imagined. Is it possible to post a better image of the background landscape that includes the hill at the right? It seems to have some distinctive feature but it is hard to tell. Also, what activity are the men in the gazebo engaged in?

Right under the tree, there seems to be some writing. Is this the signature of Anthony Devis? I think I also spotted the number 13 there, but a picture with a higher resolution might show it better.
The person leaning out of the tree house (a child?) seems to be holding something resembling a fishing rod and at its end there seems to be a money bag. The (post?) rider carries two large bags. Could the tree house be a toll house and the rider has just paid the toll which the young man now pulls up?
Is this really a half moon? Isn’t that a rather unusual way of painting a half moon? From the close up it looks as if the “moon” is more like a ring around the figure on the sign.

I could not make sense of the lines that might be an inscription, but I agree it is worth looking into further. The figures in the tree house I thought were more mischievous. Perhaps the painter means to show that they have just robbed the man on the horse, using their rod? The sign I thought was pretty clearly a man in the moon.

I don't think the fishing rod is there. The boy or girl is looking to our right at a bird on the flat stump half way up the tree. The money purse is I think a knot hole in the tree. And the writing under the tree looks like a representation of a root formation. The man behind the boy/girl is reaching up with his left arm , as if to operate something perhaps.

I thought the man was trying to fish something out of the hole in the tree. I'm not sure what you can fish out of a hole in a tree, maybe it's some sort of game.

I agree that the tree house is probably an annexe of some kind to the inn at the left (but not a camera obscura and most unlikely to be a toll booth). Perhaps the man on the right, in the tree house, is simply holding a clay pipe in his left hand? The man, woman, boy or girl to the left seems to be holding a gently curved rod, about a metre long.

Thank you to all participants for this interesting discussion. As no new information has come forward to give a definite geographic location to the inn, or confirm its existence, it is recommended that the title and description remains as it is, subject to the agreement of the Harris team.

Many thanks to you all for your interesting comments and suggestions. I’m also inclined to think that the pub/inn is actually the building to the left of the image and that the tree house is an unusual and amusing folly to draw in passing trade!

Thanks Amanda, I agree, as we can’t confirm that the inn existed or its location, we will leave the title and description as it is for now.

Description
This painting prompts the question – did this remarkable pub in a tree really exist? No-one is sure. The artist may have copied the scene from a Dutch painting. The behaviour of some figures is bawdier than the artist usually depicted and more in keeping with the Dutch style. He was a very successful landscape painter who settled in Surrey in 1780. If the pub did exist, it may have been there. Preston-born Devis was half-brother to the portrait painter, Arthur Devis.