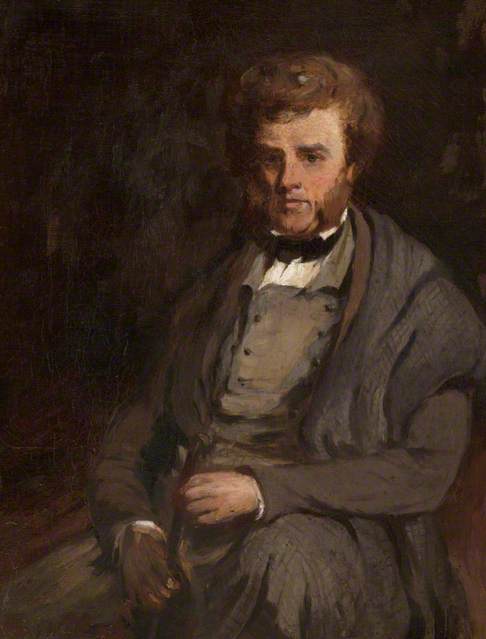 The collection note they are happy for this work to be listed as 'probably' by William Bonnar (1800–1855), but can any Art Detectives find more information to confirm Bonnar as the artist?

This discussion is now closed. The death date for artist William Bonnar has been amended from 1855 to 1853 and the attribution has be upgraded from ‘William Bonnar (possibly)’ to ‘William Bonnar (probably)’. The title has been enhanced with the sitter’s dates and the portrait has been dated to ‘1846 or before’.

The mezzotint is mentioned in several newspapers as ‘from the original by Wm. Bonnar, Esq. R.S.A' (i.e. Coleraine Chronicle). The earliest reference I found is from 1847 (Newcastle Guardian).
Miller’s portrait is mentioned again in an article in 1902 (Edinburgh Evening News).
About William Bonnar: according to contemporary newspapers he died on 27th January 1853 (Dundee, Perth, ... and Greenock Advertiser), not in 1855.

There is a larger version of the painting in Inverness.
http://artuk.org/discover/artworks/hugh-miller-18021856-166073

Another version, lent by Mrs Miller, was shown a the South Kensington Museum in 1868. This was 15 1/2 x 12 inches, about the size of the picture under discussion, but it doesn't seem to have been the same one, as the description explicitly mentions him being seated on rocks, as in the mezzotint.
https://books.google.co.uk/books?id=X0HKTKFPKWUC&pg=PA98&dq
A lithograph based on Bonnar's portrait, was used as the frontispiece of the first volume of "The Life and Letters of Hugh Miller" by Peter Bayne. The inscription gives his age at the time of painting as 34, thus dating it to c.1836.

The version of the portrait belonging to Mrs Miller, moreover, was on panel, while ours is on canvas.

The 1871 American edition of 'Life & Letters...' had yet another mezzotint version as frontispiece (engr AH Ritchie): http://bit.ly/20Z8xBF ; and this one, too, looks as if it derives from the same original: http://bit.ly/1VGS7Od

It seems likely that the portrait lent to South Kensington in 1868 by Mrs Miller (doubtless Hugh's widow, Lydia, d 1876) was the original / prime / finished version, and the source for the 1846 mezzotint (and also the later prints, though they may well have been copied from the first print rather than the picture). The question is whether either of the two rougher portraits - this one at the Hugh Miller Museum and the larger one at Inverness spotted by Oliver - could be sketches or copies by Bonnar himself.

I'd have thought it unlikely Bonnar would have copied his own finished work so loosely...and why would anyone else, for that matter, have copied it so imprecisely, without even a hint of the double tree-trunk top left, for example? As for a preliminary sketch - my instinct is that this one, with its close size, looser handling, rougher blocks of paint, and slightly clumsy placing of the figure, could well be. And I'm beginning to think that the larger Inverness version makes sense too, as the artist having another bash at getting the basic composition right, together with some more detailed work on the face (which is closer to the mezzotint image than our one, especially the eyes). I wonder if any petimenti are visible on either...and anything on the back?

EDIT: the hypothesis is given a little more weight by the two related portraits by Bonner of Thomas Chalmers on Art UK - http://bit.ly/1qECjPg and http://bit.ly/1Sx82OY
The first, slightly the larger and rougher, looks like it could have been a precursor to the smoother and more detailed qualities of the second.

As well as the uncomfortable squashing of the figure against the right-hand edge in this version, there are other clear changes worth noting when comparing the three images:

1. The top of the stick - significantly lower and less prominent on this work versus the Inverness one and the 1846 mezzotint.
2. The depiction of the left-hand (to us) lapel - Inverness and mezzotint pretty close, but different and rather messier in this one.
3. The check pattern of his plaid - coarser in this version, goes finer on Inverness's (though apparently not bothering to continue it over the knee), finer still in the mezzotint.

These differences strongly indicate to me a progression of concept and detail, and support the idea that this and Inverness are autograph sketches, this one being the earlier.

In this my first post as Group Leader, I would like to pay tribute to Barbara Bryant who preceded me in the role. She will be a hard act to follow. I propose to look first at those discussions which have been inactive for some years.

The discussion on the portrait of Hugh Miller has attracted six useful responses. Osmund’s posts of 21 April and 26 April 2016 go far to summing up the evidence and possible outcomes. It is a recommendation to Art UK that the death date for the artist William Bonnar should be amended on Art UK to 1853, about which there can be little dispute in view of the overwhelming evidence cited in Osmund’s post of 19 April 2016. It is a proposed recommendation to the collection that the evidence would allow for the attribution of the Hugh Miller portrait to be upgraded from ‘Possibly by William Bonnar’, to ‘Probably by William Bonnar’. It is likely that the painting is by this artist but since the full range of his work remains to be studied and catalogued, it is probably better to err on the side of caution, hence ‘Probably’. Given that both artist and sitter had links to Edinburgh, it is likely that the portrait was painted there. If one accepts the reasonable suggestion that this painting was a preparatory study then it presumably predates the engraving of 1846. The basis for the the date of 1836 ascribed to the portrait in ‘Life and Letters of Hugh Miller’ (1871) is unclear, meaning that this earlier date cannot be relied on. As such the painting could be given a date of ‘by 1846’

Unless there are further posts providing new evidence, I propose to recommend next week that this discussion should be concluded.

The collection has been contacted. The curator is on annual leave until 19th October.

A colleague has pointed out this picture in the same collection, attributed to 'Bonner'.
https://bit.ly/3jRuD8D

I suppose a new discussion could be started regarding the identity of "Bonner," which would of course require a high-resolution image of the signature to see if it is actually Bonnar, as in William Bonnar.

While "probably by" Bonnar is reasonable, this picture is at least after him even if not by his hand. In other words, he is at least the source of the image, and that should be made clear to avoid implying the possibility that the image may have been created by someone else.

I would suggest using "(probably by or at least after him)"