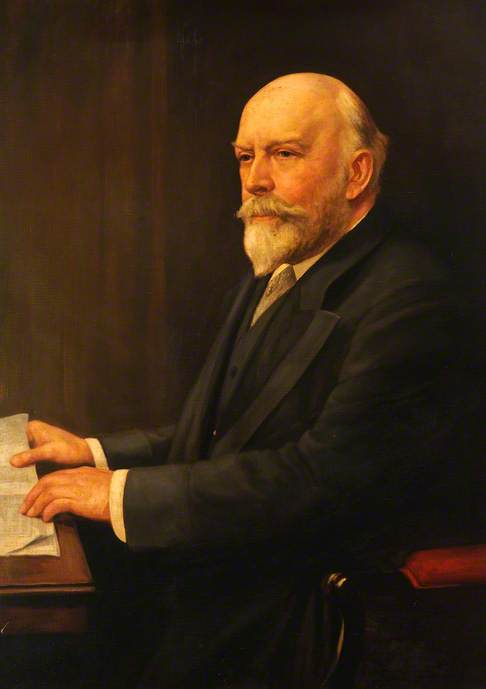 A.G. Klein is not in ULAN, Your paintings, Who was who, Google (first 20 pages), or NPG online catalogue.

There is however a second painting in the Wellcome Library that was catalogued as by him (A.G. or A.B. Klein): see
http://catalogue.wellcomelibrary.org/search~S5/o?SEARCH=45822i&searchscope=5

This has also meant that 'Sir St Clair Thomson' at the Wellcome Library has been re-attributed to Adrian Cornwell-Clyne (1892–1969).
http://www.bbc.co.uk/arts/yourpaintings/paintings/sir-st-clair-thomson-126766

These changes will appear on the Your Paintings website by the end of November 2014. Thank you to all for participating in this discussion. To those viewing this discussion for the first time, please see below for all comments that led to this conclusion and for further information on the artist.

I wonder if this might be by Capt. Adrian B Klein, who exhibited between 1914-18 at the New English Art Club, the International Society, the London Salon and the Leicester Gallery. In 1918 his address is given as Special Works School, Kensington Gardens.
The painting appears good quality - it seems odd there is no information on this painter!
Anthony J Lester, FRSA

Maybe Adrian Bernard Klein (1892-1969)? He changed his name to Adrian Cornwell-Clyne according to the wikipedia entry about his mother: http://en.wikipedia.org/wiki/Kathleen_Clarice_Groom

Some examples of his works:
http://www.sulisfineart.com/adrian-cornwell-clyne-mbe-frps-mid-20th-century-graphite-drawing-portrait.html

Thanks to Anthony and Andrea. This must be the right man, as the old Wellcome Library catalogue record mentions his M.B.E. See also http://www.geni.com/people/Maj-Adrian-Bernard-Cornwell-Clyne-MB-E-F-R-P-S/6000000018169238085

What an extraordinary family!

The artist was the author of Colour-Music, the Art of Light, London, 1926

also of Colour Cinematography, London, 1936
He surely made use of photography in the creation of this portrait

I think we can agree that Adrian Bernard Klein (1892-1969), later Adrian Cornwell-Clyne, is almost certainly the artist. It is interesting that this painting appears to be, as Martin points out, based on a photograph, especially in the light of Klein's interest in photography.

The reference Andrea Kollman provded has some useful biographical information: "Adrian Bernard Leopold Klein was born in London in 1892, son of the pre-eminent Victorian and Edwardian music professor and critic Herman Klein. His mother was Kathleen Clarice Louise Cornwell, a prolific author who wrote under several names. Adrian Klein also became a writer. He was an artist and wrote books on photography and cinematography. After serving as an officer in the British Army he became a Fellow of the Royal Photographic Society and changed his name to Adrian Cornwell-Clyne to emphasise his English nationality. In 1921 he designed a colour projector that consisted of a large spectroscope which dispersed spectral lights onto a cinema type screen. In 1932 he gave a demonstration of the new instrument, known as a ‘colour organ’ which ‘was able to project at the will of the player every possible coloured tone in any succession, order or speed’."

Does the collection believe this work is also by Adrian Bernard Klein?
http://www.bbc.co.uk/arts/yourpaintings/paintings/sir-st-clair-thomson-126766

Yes, this portrait of Sir St Clair Thomson is also attributed to him, though we are using as the authorised form of his name "Cornwell-Clyne, Adrian, 1892-1969", which is the preferred form of his name in the Library of Congress Names Authority File: see

He is not in the Getty Union List of Artists' Names (ULAN) http://www.getty.edu/research/tools/vocabularies/ulan/

There is hardly any information about his work as a painter online. I came across one possible link between him and Sir Anderson Critchett, who was an ophthalmic surgeon: In 1921, the British Journal for Opthalmology reported that Major Adrian Klein presented some "daylight apparatus" at the Illuminating Engineering Society, page 3 bottom: http://europepmc.org/backend/ptpmcrender.fcgi?accid=PMC512535&blobtype=pdf

An obituary for Sir Anderson Critchett, including a photography, http://www.ncbi.nlm.nih.gov/pmc/articles/PMC513019/pdf/brjopthal00923-0047b.pdf

Most interestingly, Adrian Cornwell-Clyne was a Camouflage officer during WW1 and wrote a "Brief history of the Camouflage school" (which is now at the Imperial War Museum according to one source I found). There he worked with Alister MacKenzie, who used his knowledge about military camouflage when he became a celebrated golf course architect.

About A. MacKenzie (with several references to A. Cornwell-Clyne):
http://www.alistermackenzie.co.uk/Media/Default/Images/MackenzieTimeline17.pdf

This discussion appears to have been concluded to the satisfaction of the collection now.