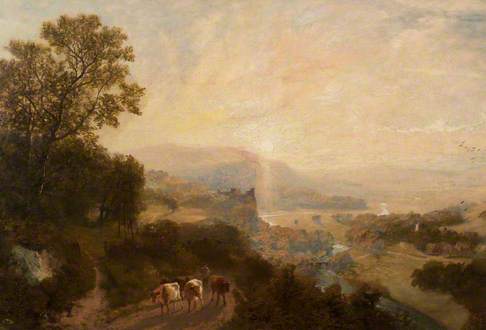 This painting is incorrectly titled. Beeston Castle sits on an isolated hill in a broad, flat plain, with no meandering river nearby.

Does anybody recognise the location of the castle depicted in this scene?

The collection note: 'Interestingly when the painting originally entered the collection in 1950 was entitled 'Halton Castle'. At some point between then and 2004 the painting was renamed/reidentified as Beeston Castle and the identification has stuck.

Compare with a view of Halton Castle from Fiddler's Ferry:

This painting is now titled ‘Hornby Castle, Lancashire’. The painting description has also been updated. These amends will appear on Art UK in due course.

If anyone has any new information about the artist, please propose a new discussion by following the Art Detective link on the artwork page on Art UK.

Could it be Clitheroe castle, and the river Ribble?

Well it certainly has overtones of Claude and his ideal landscapes to my mind. Maybe it is an idyllic depiction and not of an actual place in Britain. having checked many images of his work (or attributed to him anyway), it certainly looks as though he dreamt up much of his subject matter. Fine artist too.

It's not an exaggerated view of Hornby Castle is it? The profile of hills landscape in the background looks close to that in Turner's watercolour 'Ingleborough from the terrace of Hornby Castle'. Both will have made changes for artistic purposes. See these images:

It could be a rather romanticised view of Chepstow from the south west. The cliff edge location of the castle, and its general form with a prominent rectangular block in the centre and elements to either side, the larger to the right, the curve of the river and the relationship with the bridge all look about right. Artists have tended to prefer to depict the view from the river.

A interesting suggestion, but I suspect the view would have to be too romanticised even for the 19th century. Chepstow is much closer to the river and, to me, the most teling difference is that from at least the 18th c to now the river Wye at Chepstow was much wider than shown in Peel's painting, and the bridge dramatically longer, a feature artists would be keen to show. Also there shouild be low wooded cliffs on the other side of the river too.

Barnard Castle , the River Tees and County Bridge below the castle .
Possibly from a viewpoint close to the centre of the town.
Few suitable images of the castle in evidence ,so I submit one image showing an acute bend in the river , as in the painting .

I thought I'd check some maps.

Beeston is ridiculous and I agree with Andrew about Chepstow.

Halton is not much better. It stands far back from the wide river Mersey, whose estuary would be dominating the middle distance from this angle. However, the naming is explicable: see later.

Clitheroe does have a distant prospect of a meandering river - the Hodder, which joins the Ribble some distance to our left. However, the castle is the highest point for miles, the river is wider, and there is no settlement immediately opposite, rather a stretch of flood plain before you reach Waddington.

Barnard Castle is a good idea. The castle ruins are not a bad approximation, the Tees and the settlement opposite are well places. However it lacks a distant river alongside hills (the Tees would carry on to our left) and the bridge, though well shaped, would be beyond the castle rather than this side of it. So perhaps we should investigate how much Peel altered his landscapes.

I most favour Hornby (the one in Lancashire). This would be a view from the high ground across the Lune above its confluence with the Wenning, which is the river in the foreground. The wooded slope beyond still exists as Hornby Park Wood. The most distant fell would be a more realistic version of Ingleborough than that of Turner, who was notorious for stretching his views vertically for compositional purposes. Do we know when Peel was active in the area? According to Wikipedia the castle was totally remodelled between 1847 and 1850.

Halton in Cheshire still has a castle. Halton in Lancashire has the site of a motte-and-bailey castle, which disappeared many centuries before this painting. It is however the next significant settlement down the Lune from Hornby Castle. You only need to add in a geographically-challenged Cheshire donor or recipient, and you have the original title!

So I think there is a very good case to rename this painting "Hornby Castle, Lancashire". A field trip to the Lune Valley might clinch it. Given the position of the sun, one might even narrow it down to a month and time of day!

The two paintings of Hornby Castle by Alfonso Toft on artuk.org show a similar setting for its position - differences in the castle's appearance might be explicable if one considered that Toft's style tends to be more accurate than this

I am glad that this discussion has been renewed, especially as my suggeston of Hornby Castle has risen again in probability. My main concern is the form of the castle itself. Even when Turner selected it in 1816, the castle's tower was more prominent than here. But the topography is so distinctive, if slightly exaggerated, that it must be identifiable eventually (I did also think of the Wye, and Goodrich Castle, but the landscape is nothing like so hilly there).

We've taken a look at the locations Martin and the other posters have made. It obviously isn't Beeston Castle ( we still haven't got to the bottom of how and why that title got attached) and Halton Castle (the identification it came into the collection with) obviously isn't right either.

Although the ruins do look right for Barnard Castle and the location is good as Peel lived about 15 miles away in Darlington between 1847 and 1858. The bridge is, however, in the wrong place as you say,

Hornby Castle (Lancashire) does seem to be the good fit in terms of the layout of the scene and we're not overly troubled by the differences in the castle's appearance as Peel's paintings would predate Toft's and potentially the remodelling.

Is it certain that the picture is by Peel, and not by a more romantic style artist ? Could it be by an artist of a slightly earlier generation interested in Turner? The lighting and atmosphere seem to me to be fairly exceptional, if is by Peel. Shaun Everett's comments about Claude's ideal landscapes have some merit.

There is a Turner watercolour of Hornby Castle from Tatham in the Victoria and Albert Museum , which was engraved in 1822 by William Radclyffe for the History of Richmondshire. Several sketchbook drawings of the castle are in the Turner Bequest, Tate Britain
A more distant view is in Turner's Crook of Lune looking towards Hornby Castle engraved by John Wykeham Archer in 1821 [British Museum] - a view looking in the opposite direction

The Crook of Lune watercolour c. 1820 is in Tate Britain

Thanks Martin. I am all the more convinced by browsing the Turner bequest at the Tate. It would not surprise me if other artists followed him. Indeed, does Peel "have form", of following others, particularly Turner?

In addition, two minor details of correspondence with maps effectively clinch it for me. First, the short rightward turn of the river to pass under the bridge before the sharp bend. Second, the way the castle stands back from the sharp bend itself, but will tower over the river a few tens of metres further on. Peel is very faithful to the terrain, and an impressive composer in situ.

Thank you to Malcolm, Martin and Andrew for your comments.

Having taken your comments into consideration and the consensus expressed within I think we're going to ask for the title to be changed to 'Hornby Castle, Lancashire' and the artist to be changed to James Peel (attributed) given that there appears to be some doubt there also. We'll also draft a new accompanying description that reflects the discussion above.

We'll be making the same alterations to our own catalogue too, obviously.

Thanks again for all your help.

To properly complete this discussion, I propose a formal recommendation that the subject is probably Hornby Castle, Lancashire. I have no reason to doubt the authorship of James Peel, although it is a more inventive composition than many. Very many British landscape painters of the second half of the century were influenced by Turner, Peel among them.

If you can find (or get a local to take) a reliable image of the castle from this viewpoint above the confluence of rivers, then you ought to be able to restrict the date: post 1850 if similar, pre-1850 if not at all.

What exactly was the authorship based upon before this discussion?

I ask, because having now followed up the opinions above, I agree with Martin that it is unlike most of Peel's work, though there are two or three others on Art UK with what I'd call "expressive" light and colour.

There is a rather obvious reason why it might be so. This was a popular view by Turner, with several engravings. I doubt if artists would have known the watercolours, but they may well have known that there were no major oils from the engravings. What a great opportunity to "do a Turner" - which is what we have here, even down to the low sun! It's a homage.

So even though it is unusual, I wouldn't discount other evidence for Peel on the basis of this style.

Although Hornby Castle is almost certainly the subject of this picture, I have not yet seen a painting by Peel or in the auction rooms on line that seems to be by the same artist as the one who executed this painting . It is much more in the realm of the Lancashire painter William Linton , and artists of his ilk. I do not think that it is by Linton, but there seems to be enough reason for doubt about the attribution to start a different discussion about its authorship, if its owner would like this question pursued.

Thank you once again for your comments.

We are going to leave the artist as James Peel for now and propose to Art UK that the title be changed to 'Hornby Castle, Lancashire', adding a new description in line with the discussions above.

We agree that the attribution of the painting might best be pursued by a separate discussion.

Thanks once again for your help.

Description
This painting depicts Hornby Castle in Lancashire in a view from the high ground across the River Lune, above its confluence with the River Wenning in the foreground. The wooded slope beyond still exists as Hornby Park Wood and the most distant fell is Ingleborough.