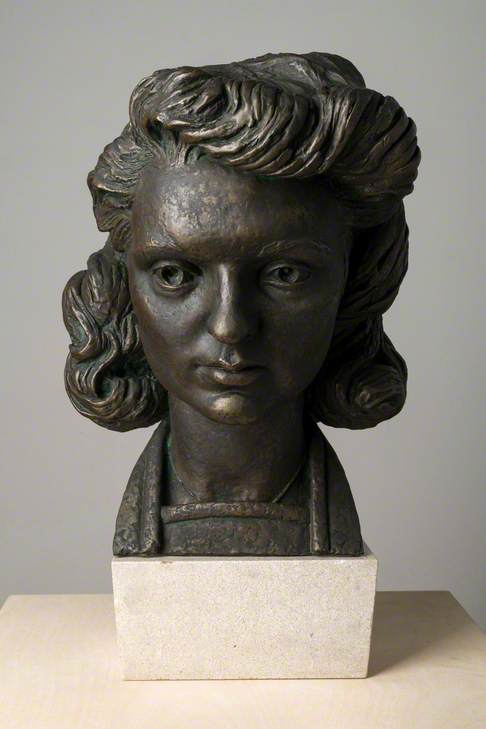 This intriguing bust, probably 1940s–1950s, looks like the work of someone like Frank Dobson or possibly Jacob Epstein, though it appears to be unsigned.

the hair looks too mannered for Epstein and the clay surface too perfect for Dobson. The hair forms feel too decorative for either. Are there any more views?

Jon, yes, if you go to https://artuk.org/discover/artworks/head-of-a-girl-269040 and click on the nine small white squares with 1/7 above them just under the image. David

It is bronze, by the way.

Does Wolverhampton have any provenance information, such as when and from what source the bust entered the collection?

The full face photo does indeed suggest 1940's-1950's but on looking at the other views it is clear that the hair above the forehead is not in a war time "roll" which would have been held in place with pins. (My mother's style at that time.) My hunch would be to look at the 60-70's. My own hairstyle back then was almost identical with the annoyance of being unable to stop the front curled hair from flopping forward.

Jacinto, they do not have any acquisition information recorded on their database available to them now, but when they are back in the Gallery they will check their paper files. David

I expect it could be early 1960s, but I rather doubt 1970s, and I still think 1950s is quite plausible. If we are lucky, the date of acquisition may help with dating the piece.

Enigmatic features, this is ringing a bell but I can’t yet put a finger on it - it is certainly worth contacting the Royal Society of Sculptors at Dora House, SW7 about this.

Please do report back to the site with the answer, it really would be fascinating to know who the subject is and by whom....

All v best wishes for your Quest!

I have wondered if Thomas Bayliss Huxley-Jones because of Chelmsford discussion? I feel some similarities in style, here for example https://artuk.org/discover/artworks/doris-willis-250910/search/actor:huxley-jones-thomas-bayliss-19081968/page/1/view_as/grid. Probably a coincidence but Mapping Sculpture page https://sculpture.gla.ac.uk/view/person.php?id=msib6_1212681379 notes ‘Head of a girl’ in 1951.

Interesting thought, David. It's worth looking into, but Huxley-Jones seems to have had a more naturalistic style, and this head feels different to me, though that's hardly evidence.

I have checked with our contact if they have been allowed to go back to the Gallery yet to check paper files for acquisition information.

Might this be the head of a well-known young British actress? Jean Simmons comes to mind or one from that 1950s/1960s era?

I haven't had a long look at this, but my feeling is that local man, Sir Charles Thomas Wheeler (1892-1974), would be a good option. Born in Staffordshire, Wheeler was raised in Wolverhampton and he studied at Wolverhampton School of Art. A perfect reason for this piece to be in the Wolverhampton collection. I'll try to undertake some further research in a day or two.

I had a quick look at my RA catalogues and I found the attached sculpture by Sir Charles Wheeler, PRA, of Princess Alexandra. It was in the RA in 1968 and is exactly the same height as our piece. Sorry about the quality of the photo. Will get a better shot in daylight.

Jean Simmons is possible, Kieran, though I'm not convinced. I considered Diana Dors, but quickly discarded that idea.

An improved image of the Sir Charles Wheeler bronze of HRH Princess Alexandra is attached. It is from Royal Academy Illustrated 1968. I imagine that this work was a commission from him in part due to his former role as President of the Royal Academy. Charles Wheeler was active as a sculptor from the 1920s. His wife, Muriel, Lady Wheeler, sat for him regularly and she was also a well known painter and sculptor with a strong connection to Wolverhampton, which is where she met Charles Wheeler. I have a book in store on Charles Wheeler and I'll try to find it as it may help further, assuming my thoughts in regard to a possible attribution to Charles Wheeler are correct.

I am not familiar with Wheeler's work. Our bust feels different to me than the Alexandra bust, but I suppose his style may have changed over time, given a long career. The matter seems worth pursuing.

I have looked through the Wolverhampton collection as recorded on Art UK and I think I may have made a little progress in working out the approximate indexing in regard to the sculptures. Our bronze has the accession number S43, which based on other works I have checked in the collection, should give a rough date of acceptance of circa 1965-68, although some of the numbering is not exactly in sequence. There is no indication presently whether this particular work came via gift, bequest or was purchased. The collection has two sculptures currently recorded as being by Sir Charles Thomas Wheeler, namely 'Mother & Child', ref S17, purchased from the artist in 1945, and 'Adam', ref S14 received by gift in 1957 to mark the election of Charles Wheeler as President of the Royal Academy. In addition to the work by Charles Wheeler there is also sculpture by other artists with strong local connections, namely John Paddison (1929-2000), Geoffrey Dudley (1918-1986) and Robert Jackson Emerson (1878-1944). My feeling is that the current work under discussion may well have had a strong artist connection to Wolverhampton.

Thank you, Grant. Perhaps David (Saywell) can ask the gallery if it could now check its paper files for information as to when and from what source the bust entered the collection.

Jacinto, thanks - I have just asked again now by email, after last trying on 25th May. I will post here a response when I receive it. David

I have now linked the Collection's own online catalogue record to the Art UK record. You can search for each accession number in the search box top right, or change the 'WAGMU_S43' section of the URL and replace with other 'S' numbers either side of this number.

Wow! It now looks very different. The patina is extraordinary and it makes me think now that this piece is from the 1920s or 1930s.

The lower number clearly seems to be a 3, and the one above it appears to be a 1. I expect this is related to the number of bronze casts made and presumably the number of this one. However, we do need a better view of that area.

Jacinto, the Collection have commented:
'We have checked all of our records, unfortunately we have no record of this sculpture. It seems it was simply discovered when a store audit was carried out at some point. The earliest reference we could find was a list from 1976 so it must have been in the collection since then'
Grant, the Collection have commented:
'It may well be by Charles Wheeler, I have checked his artist file and there is nothing referring to this work in the file.'

Looking at the hair again, is it worth considering Muriel Wheeler as well?

Couple of her works for reference: https://artuk.org/discover/artworks/sir-charles-thomas-wheeler-18921974-253666

Andrew, thank you. I agree. Muriel Wheeler was also an art student in Wolverhampton which is where she met her future husband Charles Wheeler. The family connection to the local Art Gallery is a strong one.

Can we get a close-up at the best available resolution of the numbers or inscription at the right of the back of the base seen in image #4, previously noted by Kieran? To start, can Art UK try its hand at it?

Jacinto, I have asked my Imaging colleagues if they can pull the hi-res image out. It's not in its normal place for hi-res images, hopefully will post something later today. David

Kieran and Jacinto, here's a close up as requested, courtesy of the Images team. David

Apparently, David, what we saw before was an optical illusion.

In that area perhaps, but I thought there were some areas with interesting marks that could be letters. On the left shoulder, right in the centre, possibly some writing on the base itself, to the right of the '3', and maybe some markings on the edge to the right. I thought at least worthy of asking the Collection again to look at those areas?

The collection would have to examine those areas closely on the actual object, which is certainly worth trying.

Would it be possible please, as Jacinto suggested last year, for the Collection to examine the piece at first hand? It is rather difficult for contributors to get a clear view from the image so if a better image is not possible, could we be advised please of the Collection's interpretation of what is inscribed there? Thank you.

Just to observe that the 'W' picked out upper right in David's image at 31/08/2021 above is similar to that on the bronze bust of James Grant Anderson, actor, (probably 'W 1936') that is subject of another unresolved discussion: see detail here:

It may just be coincidence but the two items are not so different as to dismiss it out of hand.

Pieter, thank you, I agree, that is very interesting. I hadn't seen the other discussion. Is the 'W' for 'Wheeler'?

Last summer I contacted the owner of a photo on the ‘Taylor Family Tree’ on Ancestry about one of the photos in her image gallery for Lady Muriel Wheeler. While she does not know which woman in the photo (attached) was Lady Wheeler, she told me that she thought the photo was “taken at Art College” and she dated it 1905. I have attached her photo and my composite based on one of the women in the photo. I have also attached one of her photos that has the title 'Muriel Wheeler nee Bourne'.

I saw similar ones at https://theartchi.com

A further request to examine the object and photograph all the areas of interest (as marked up by David above) went to the collection this afternoon.

There are a few photographs of works by Muriel Wheeler in the V&A for comparison: https://bit.ly/3viACdn

They certainly look similar in style.

The curator has checked the back of the bust and the areas marked up (see attachment 31/8/21) are all corrosion products/patina. There is no signature or other identifying marks anywhere on the bust.

Title
Head of a Girl