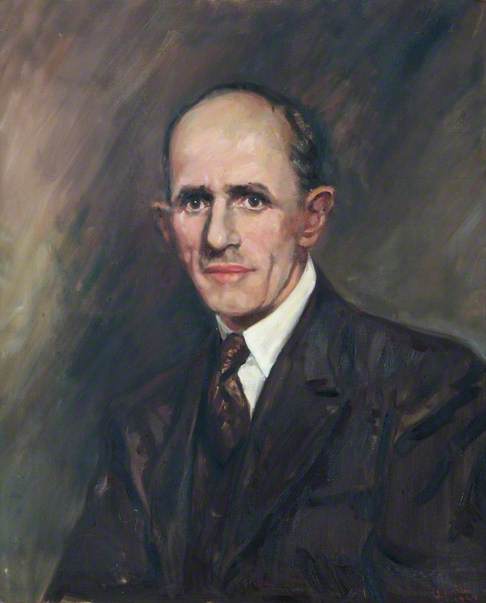 Alistair Brown, Art UK added: 'From the image I have access to it looks as if it could be signed J Alison and dated 1944.'

The Collection has commented: 'This painting was one of a group that we collected from the basement from one of the local schools (as recorded in the acquisition notes on the record). The school had no other information that accompanied the group of paintings, nor was there anything additional of comment for this particular work. The school is a Church of England School in Hornsey in Haringey and associated with the old church of St Mary's in Hornsey. So it is possible that this gentleman could have been a former head teacher/ teacher / on the parish board etc. If it helps at all, we wonder if this other painting in our collection - given it was part of the same group of paintings collected at the school - maybe possibly by the same artist? It could be mid-century too?' https://bit.ly/3yNdXXs

I doubt the two portraits are by the same hand. The style or handling is different. We need a better close-up of the signature, but I do not read the surname as Pail.

Aris seems to have been mainly a copyist, at least as far as portraits are concerned, which makes her style hard to pin down; but there is one original work on Art UK of roughly the right date ("c.1940-45") that is comparable, and that seems to have the same signature (inasmuch as we can see): https://bit.ly/3xJmcSQ. David, could we see the largest image Art UK has of that (bottom right) corner - it doesn't need to be as tightly cropped to the signature as you sometimes do, and which when small I can find a bit confusing.

Another later work, a double portrait of 1965, has a similarly pale (dare I say anaemic?) palette: https://bit.ly/3m2gJEI. This also has a signature (bottom left) which is worth a closer look, if available.

Sorry, Marcie, we've overlapped - I should have refreshed the page before posting.

I have been looking at the Bruce Castle collection. I love the coaching scenes-on loan from the Postal Workers Union since 1927!!! ,especially "The Ely Van" and "The Ashford Coach"-and who is Beatrice Offor??. But I digress. The collection has a few paintings of gentlemen ,range of dates, who were the MP or special local dignitaries.If Joyce Aris was a copyist,perhaps the originals were done by a different artist,and copies were made for some reason? Perhaps air raid damage. Percy Alden(one sitter) the MP in 1924 was killed by a V1 in June 1944.

According to the article “Sir William Osler's portrait by Seymour Thomas” in the Journal of the Royal Society of Medecine (Vol. 83, Jan. 1990, p. 44), Joyce Aris was indeed known to be a copyist.

“In 1960 the College commissioned Joyce Aris (1904-1986), who was the recommended copyist of the National Portrait Gallery, London. She had already in 1960 painted a copy of the Osler portrait for the Louis M. Orr Foundation, Orlando, Florida. Her second copy (1961) of the Seymour Thomas portrait of Sir William Osler now hangs in the Osler Room of the Royal College of Physicians.”

It is quite evident that Aris was a copyist from looking over her work listed in Art UK. She appears to have specialised in portraits, and it would seem she also painted original portraits.

However, only 2 of the 11 works listed under Aris on Art UK are presumably original to her, both linked by Osmund above and about 20 years apart. It is possible they were done after photographs, I suppose. They differ in style or handling, the earlier work being sharper and more crisply rendered, unlike our portrait, which is closer to the double portrait from c. 1965.

It is not in Knight's style, which Aris would have reproduced if this were a copy of his work, as she did in the case below:

Aris's General O'Connor is clearly from a photo by Hay Wrightson in the NPG. Joyce makes him look a bit younger :-) . I feel that the sitter here is someone of interest,perhaps in the NPG? As to possible original artist- there is always my default stand by-Thomas Cantrell Dougdale-??? who I think has a similar style to good portrait artists of this period.
I shall keep looking.You never know.

Ooh - I have just discovered a different portrait of General O'Connor in the IWM- also by Joyce Aris- original dated 1912 I think-so probably a copy of a painting. Had to lift copy as IWM site not working fully.

Louis, that is not Nugent O'Connor, and not by Joyce Aris. It is William Orpen's well-known 1917 portrait of Field Marshall Sir Douglas Haig, which is on Art UK: https://bit.ly/3xLriy9. It is even visibly signed 'Orpen', though partly under the IWM logo.

Please, *please* check your facts carefully before posting such 'information' on the forum - it is misleading to the public, and seriously damages the reputation and credibility of Art Detective.

Here is the photo of Nugent O'Connor at the NPG which was evidently the source for the Aris portrait of him on art UK:

That leaves only one possible original picture by her on Art UK, the double portrait from c. 1965, which may also be after a photo.

Close but the receding hairline isn’t the same. Plus, I think he would have looked less disheveled.
See this photo of him at the National Portrait Gallery (NPG x169436).
https://tinyurl.com/n6kk8evn

Our sitter does not look like Sargent, and the picture's provenance made Sargent a highly unlikely candidate in any case.

Yes Marcie-if you look at the photos in the NPG from the 1920's and 30's -as I had done- he looks quite different to later times,and as to hair- those formal fotos had a bit of air brushing :-) -also on the left eyebrow deformity. This one gives a hint of his frontal baldnes- and in later life I think a Hairpiece ( Rug)But the suit ,shirt and tie plus tie knot are all very similar.
https://www.npg.org.uk/collections/search/portrait/mw161806/Eileen-Laura-Sargent-ne-Harding-Horne-Malcolm-Sargent?LinkID=mp03979&search=sas&sText=malcolm+sargent&displayNo=60&role=sit&rNo=15