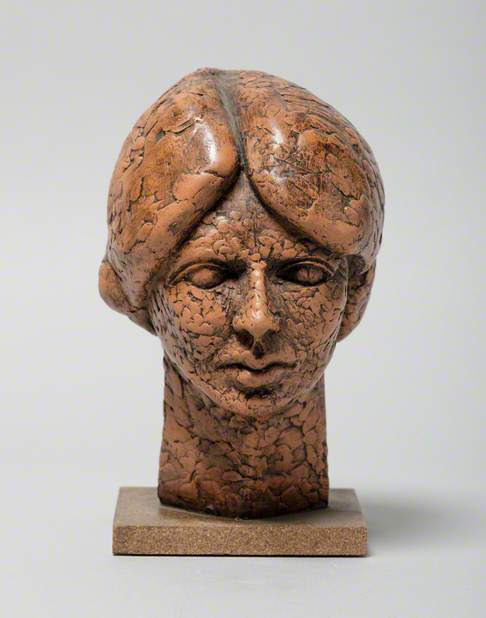 This sculpture appears to have been made from wood, but which kind? It looks like a highly figured and rather exotic burl that has been polished, then retouched using a stain. The effect is reptilian.

Could anyone suggest who might have sculpted it, or where it might have come from and when?

This folk art piece made from a burled knot of maple, c.1960, is similar.
https://bit.ly/2NYIqLf

This discussion is now closed. The medium, previously believed to be wood, has been identified as a cast, probably a metal alloy, with patination simulating the terracotta colour of the clay from which the original model was made. The form has been built up with small clay pellets, a technique that was in fashion in the 1950s.

This looks to me as if it is built up from clay. See the attached image for the technique. The difference and variations in texture in the neck, face and hair are explained by this. Doesn't look at all like wood to me. It should be easy to tell by tapping it with a fingernail. Date probaby 1920s or '30s?

I agree that it is most likely made of clay. My husband sculpts and thinks that perhaps rolls of clay were pressed into the basic form to get that burled effect. Sometimes he has fired a piece then used shoe polish to get a wooden effect. Photo attached

Thank you for these suggestions that this is probably made of clay, rather than wood.

Pat, thank you for the attachments. Your husband's wooden effect from firing followed by shoe polish is very convincing!

This is a modelled, not a carved piece, although it is not clear whether it is a cast after a clay model. What the sculptor was hoping to achieve in the initial modelling of this bust, was surface texture. The 'pelleted' effect was used by sculptors such as Frank Dobson (1886-1963), occasionally Jacob Epstein when he turned to modelling after WWII, Peter Peri (1899-1967), and others.

Dobson theorised on 'form', achieved by 'rolled up mud', which he argued came, in the grand scheme of things, before 'scratches' on cave walls. The rather anonymous bust under discussion has classical 'blind' eyeballs, not characteristic of Dobson, but common to the 1920s and 30s, and more typical of most of the busts by Dora Gordine (1895-1991), whose work also shows a fascination with surface texture.

I am not suggesting the bust under discussion is by any of the sculptors mentioned, only that the techniques are common to modellers in clay in the second quarter of the twentieth century. The helmeted hairstyle might corroborate Andrew's suggestion as to date.

It would appear that the finished fired or cast surface has been 'patinated' with soot, or pigment, or even as Pat suggests boot black.

Perhaps Gallery Oldham could check the medium, as Andrew says this should not be difficult. What does it weigh? Can you pick it up? Is it fired clay, in other words terracotta (most likely), or is it plaster or a resin substitute, painted and patinated?

Again provenance would help, it has only a temporary accession number.

Hello.
I am the Collections Assistant, Art for Gallery Oldham. I have had a look at the head in order to ascertain the material of the sculpture and it appears to be a cast metal which is hollow.

I have double checked what information we have on the head and unfortunately the provenance is not know at this moment in time in order to shed any further light on it.

Hello,
Many thanks for looking into this-and for pointing us to the right direction in regards to the bust’s material.
It’s quite helpful that we can now ascertain that’s bust is made from metal -rather than wood or clay.

Does anyone following this discussion would have any new suggestions on artist and/or date?

I would like to thank Dr Jonathan Black FRSA, FRHistS, Senior Research Fellow in History of Art at Kingston School of Art, for his comments on this piece. In his opinion this does not look like the work of Dora Gordine, but he suggests we could look at one of her inter-war contemporaries such as Dora Clarke, Gertrude Hermes or Karin Jonzen. He adds that Dobson generally produced a much smoother surface finish and the treatment here suggests to him an awareness of Epstein post-First World War. Does anyone have access to Benedict Read and Peyton Skipwith, 'Sculpture in Britain between the Wars' (Fine Art Society: London, 1986)?

If the question really was only one of medium, and no one has any interest in finding out who it might be of or by, then it is an open and now to be shut case.

The collection has confirmed my own view that it is a cast, probably a metal alloy, but it should be noted that there are metallized concrete casts, Skin bronzes, treated plaster and ciment fondu, even cemented iron casts. I would also add that it has an interesting patination, simulating the terracotta colour of the clay from which the original model was made. As I said in an earlier intervention, the sculptor was using a particular technique of building up the form with small clay pellets, hence the rather curious surface texture.

It is worth noticing that while the type is possibly too generic to be a portrait, the medium is an expensive one, and the patination sophisticated. It does have certain noticeably specific features: the indentation between the nose and upper lip, the philtrum, is pronounced, as are the lips, the eye balls appear blank (though the left proper may be incised), and were an attributable name to emerge these would provide comparators. The helmet haircut, with the suggestion of a bun (?), would point in general to the 1920s and 30s, but such things can be residual. ‘Bobs’ appear in the post-war pellet-surfaced work of Karin Jonzen, for example. As Jonathan Black remarks Dora Gordine’s finishes are smooth, although after the War she too appears to have used the pellet technique to build up the form. Gordine achieved altogether subtler finishes than we have here, smoothing off to give an orange-peel appearance or wire brushing for surface striations, but the aesthetic was one of surface texture.

Read and Skipwith’s 'Sculpture in Britain Between the Wars' (Fine Art Society, 1986) gives an overall impression that work of that period is one of streamlined surfaces whatever the medium, which accords with the aesthetics of Art Deco. The pellet technique, a process of addition rather than subtraction, was a phase or stylistic fashion which would probably place the bust in the post-war years 1949-59. The Festival of Britain and the struggle for the figurative against Abstraction produced a significant number of pieces of sculpture where the pellet-modelled technique created a surface finish which was an aesthetic in its own right. Examples might be Frank Dobson’s 'Leisure' for the Festival of Britain (1951, now cast in bronze, South Bank), F.E. McWilliam’s 'Elizabeth Frink' (1956; The Herbert, Coventry), and Franta Belsky’s 'Lesson' (1956-7; Avebury Estate, Bethnal Green). Other sculptors to use the technique include Benno Schotz, early Frink and early Dalwood, and even Henry Moore in the early 1950s.

What are the possible acquisition methods which might provide a date for its entry into the collection? A purchase, gift or bequest ? A loan source? Was there ever a sculpture exhibition in the Art Gallery from which it might have been left behind or bought? Did the Art Gallery, now Gallery Oldham, host local art exhibitions for the local community of artists, or, in the past, diploma shows for Oldham College? If the holding collection has really no information as to its provenance on which to base further enquiry, we are probably grasping at straws, and there is probably too little to continue here with the discussion.

Description
The patination of this cast simulates the terracotta colour of the clay from which the original model was made. The form has been built up with small clay pellets, a technique that was in fashion in the 1950s.