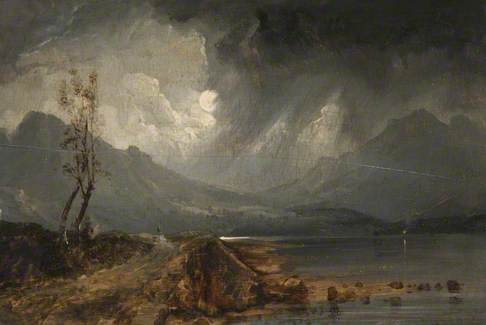 Horatio McCulloch exhibited a painting at the RSA Annual Exhibition in 1834 (cat.4) titled 'Arran from Bute, effect of sunshine breaking through a rainy cloud'.

The subject matter would fit, if the background mountains can be identified to satisfactorily match the topography given in the title.

It's too close to be Arran from Bute, and the water looks more like a loch than the Clyde.

Also, the picture may show a full moon rather than the sun.

Yes, there is foreshortening, but the best fit for the Arran glen and mountains in this picture are:
- Glen Sannox
- Suide Fhearghas - the mountain on the right. The ridge behind this mountain leads to Caisteal Abhail
- Cioch na h-Oighe (commonly known as The Bastion) – the mountain on the left. Just to the left of this mountain there is a bowl shape which fits Coire na Ciche (commonly known as The Devil’s Punchbowl)
The picture foreground would be somewhere on the very southern tip of Bute.

I tend to agree with Jacinto that this could well be a moonlit scene, a subject that McCulloch often exhibited. The cloud and rain seem to be clearing the disk completely - would an unmasked sun be painted like this? There is also the slightly yellow waterside object in the middle distance on the right, and its reflection in the water below - this looks like a bright light to me, which I doubt would be so evident in daylight. In fact I think it's a fire - there seems to be smoke rising from it. Actually I'm now having doubts about night vs day - we need to see some more McCulloch views in moonlight.

The building visible about one third from the left looks like the little lighthouse: https://www.flickr.com/photos/annexxxcdscotland/34954745890

I may be going blind, but I'm afraid I see no building, Maria - do you mean what I read as a figure walking along the track to the right of the foreground tree?

The first clearly shows a figure. The second shows a distinct disc in the sky. The artist's daylight scenes tend to show diffuse light behind clouds. The object on the far shore appears to be a house with orangey light (fire?) illuminating its roof and smoke rising from it.

I know the area well and even from the nearest point of Bute (Google Maps can't get you there), those mountains are quite distant. See this view from the end of Plan Road, Bute. https://bit.ly/2GGBdzZ

I’d say our view is taken across a loch, from the far side of which the hills rise straight up. Here’s the view across to Arran from Portencross on the mainland, showing the stretch of water between Bute (distant point behind the car park) and Arran. Goat Fell and other peaks aren’t right on the waterfront at Arran either. http://tiny.cc/pj1usz

However, Carol's point about foreshortening is important, and McCulloch’s can be extreme. While his view of Ben Lomond across Loch Lomond (The Hunterian Art Gallery, Glasgow) is closer to life, ‘On the Clyde’ is a highly embellished view (a picturesque fantasy) of Dumbarton Rock from a high point near Langbank.

Sorry, usual problem attaching more than one item at a time!

Ah, yes, never mind. The close-ups do clearly show a figure, not a building.

McCulloch must have worked from drawings - when he did this was he on board a boat? It would have been painted in the studio and memory must have been involved in the case of a view like this

Are there any labels on the back? Of course the panel is small enough to take on board a boat and draw the landscape in outline

This view is findable- ish-- in photos on the internet. If one were on a bit of high ground inland on Bute and used a telephoto lens -- one would get roughly this forshortened type of image - as lots of people have done- ref\:- flickr- alamy etc --- just search for images of "Aran from Bute" --

It's helpful if you give links to specific examples, Louis - especially as your searching instructions spell 'Arran' wrong for the Scottish island!

I agree with Martin that we need to see what (if anything) is on the back. It actually says it's 'on board' (in the non-nautical sense), which might be wood or more likely one of the manufactured & prepared pressed-paper boards available by this period, such as millboard & academy board. If it's one of the latter (though the size, if accurate, seems non-standard when converted into inches), then there's a chance of a supplier's label...which in turn might be dateable.

Sorry Osmund, but my typing IS awfull.No secretary ! :-( . I did not want to give public links to people's private photos- but they are easy to find.

South Ayrshire Council's documentation shows only that ‘Highland Scene’ was purchased by Ayr Burgh in 1971. They will check the picture itself as soon as possible.

As Louis Musgrove commented, there are plausible photographs of the view, which with a lot of artistic licence could support the RSA's original conjecture. Whether it is sunshine or moonlight breaking through I am not sure - the lighting of the forground suggests it is daytime, thus supporting the possibility that it is indeed McCulloch's RSA 1834 exhibit titled 'Arran from Bute, effect of sunshine breaking through a rainy cloud'. So, possibly McCulloch, possibly Arran from Bute, possibly his 1834 exhibit, seem the best we can say..