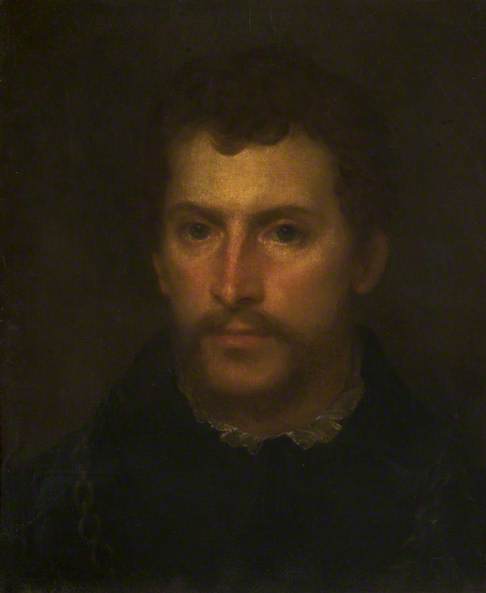 This picture is called 'a Burgomeister'. It reminds me of the Dutch word 'burgemeester', which means Mayor. Could this person have been a Mayor?

The painting's details have been amended to 'A Burgomeister' (after Titian's 'Portrait of a Young Englishman') (formerly attributed to Cornelius Johnson), and the painting listed as a work after Titian.

It's the head of Titian's "Young Englishman" in the Pitti Palace, Florence

Sadly this is not Dutch but a copy of the head of the half length portrait of a Young Englishman by Titian and in the Palazzo Pitti.

It's a copy of a Titian.

PS- still worth getting cleaned and some basic investigations done

A copy after Titian by Cornelis Janssens van Ceulen?
The title also can emerge from the families origin in Cologne. In german 'Bürgermeister' also means Mayor like the dutch 'burgemeester'.

Is there any reason to accept the attribution of this copy to Cornelis Janssens van Ceulen? Is there a label or inscription on the back? For it does not seem to resemble any paintings by this relatively prolific painter that I know

Given that this was given to Salford by Thomas Agnew, is this painting recorded somewhere in the extensive archive of this firm, which was originally based in Manchester, before becoming one of the most significant art dealers in London

The Agnews archive has been acquired very recently by the National Gallery, but it is possible that it is not yet consultable by scholars - for it will need at least inventorying

As has been noted by a number of contributors, the Salford painting is a copy of the head and part of the shoulders of Titian’s more than half-length portrait in the Palazzo Pitti, Florence, traditionally entitled, ‘Portrait of a Young Englishman’. There is no documentary evidence that the sitter is English. Some scholars have suggested that he may be Italian or German. The quality of the image makes it difficult to be certain of the date of the copy, although the facture suggests that is most likely an English hand of c. 1780 - 1810. Even if on inspection the copy turns out to be of the seventeenth century, there is nothing about its appearance to suggest that it could have been painted by Cornelis Janssens van Ceulen, a painter who often signs his work. This doubt is supported by the fact that the support is canvas, relatively rare for Janssens. If the Thomas Agnew in question is indeed the art dealer, as seems more than possible, study of the Agnew’s archive at the National Gallery might produce some indication of the painting’s provenance, but it is unlikely to be helpful about the attribution. The canvas of the original in Florence measures 111 by 93 cm, so the proportions suggest that if the measurements given by the Salford Art Gallery, 74 by 62 cm, are correct, they must include a fairly substantial frame.

Would the collection like me amend the artist to 'after Titian' and the title to ‘Portrait of a Young Englishman’?

We prefer this to be left as "A Burgomeister" by Cornelis Janssens van Ceulen . Is there any scope for adding that it is a copy of Titian's "Portrait of a Young Englishman" in the Palazzo Pitti, Florence.

Yes, it's the same Agnew. It was noted by 'ungenerous critics' that Agnew gave the museum pictures that were unsaleable in his gallery.

They advertised a Ph.d working on the Agnew's archive some months back, the student must be engaged on that project by now and would probably be able to shed some light on the provenance of this picture.

Despite the picture being nothing like his work, I can't imagine a scenario where Cornelis Janssens would have been in a position to copy the Titian. Though I would seek Karen Hearn's advice on that matter.

There is to be an exhibition of Cornelius Johnson at the National Portrait Gallery next year which will be accompanied by a book which will be published by Paul Holberton. The author is Karen Hearn. So I second Tim's recommendation that she should be consulted. The only certain thing that we know is that this picture is a copy [of uncertain date] of the Titian in the Pitti. There is no secure evidence that it is of a Burgomeister. Karen Hearn will know if Johnson[Janssens] could have seen the Titian, but as Tim suggests his authorship seems unlikely
Karen Hearn can be reached through University College, London where she is an Honorary Professor in the Department of English Language and Literature , or through the National Portrait Gallery

If anyone has Karen Hearn's contact details please email to me and I will contact her: yourpaintings@thepcf.org.uk

I have had the following email from Karen Hearn:

'Thank you for this. I do indeed work on Cornelius Johnson, and I am indeed curating a small show on him for the NPG in London and simultaneously completing a short book on him.

On the basis of seeing this not-very-high-resolution photograph on screen, there seems absolutely no reason to think that this painting is by Cornelius Johnson. And, although we don't know much in detail about his life, there is no evidence that he ever went to Italy.

By the way, the version of his name that the PCF seems to have selected to use - Cornelis Janssens van Ceulen - is a rather misleading one. Johnson was born in England, and the version of his name that he himself used until the age of 50 seems to have been 'Cornelius Johnson'. Shortly after he emigrated to the northern Netherlands (United Provinces) in 1643 he seems to have adopted the professional name 'Cornelis Jonson van Ceulen'. That is the name under which Dutch art historians know him. For most of his life he was therefore known as 'Cornelius Johnson'.

'Cornelis Janssens van Ceulen' is a strange hybrid that does not relate to any of the names that he himself used, or to the names that others used for him in his lifetime.

The PCF uses ULAN and the name preferred here is Cornelius Janssen van Ceulen, I have updated the PCF database.

However I will ask Karen to contact ULAN and request a consensus on the spelling of his name.

Just to confirm my comment of 4 July 2014 and to conclude this discussion, I see no reason to connect this late copy after Titian with Cornelius Janssen van Ceulen.

The collection have commented they are happy for the wording:

'Formerly attributed to Cornelius Janssen van Ceulen (or whatever the preferred format of his name is now) after Titian.'