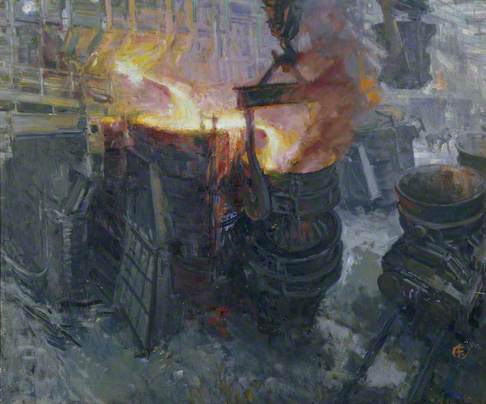 There is a monogram ?CF bottom right.

It may be TF in a circle or CTF.

I have discovered that the Abbey Works produced their own calender.I found one for 1963. Image I can see-it says -"reproduced from the oil painting by Harold Forster."
If that helps ?

Louis has got it, well done! This is the link to the calendar he mentions https://bit.ly/3bLkwjH , and this is Harold Forster on Art UK https://bit.ly/2Sj4Du0. There are two others by him of the Abbey Works held by the NMW - one is the calendar image - so it's odd the connection was not made before. Most of his works are signed in full 'FOSTER', but one, the portrait of General Cunningham, is signed in very much the same way as ours - see attached.

Is the monogram just an F in a circle, or is the H placed horizontally?

NMW also has a number of (?slightly later) works on paper by Forster of industrial subjects, including the Abbey Works: https://bit.ly/2QHmOJn. A slightly developed form of the same monogram can be found on two of those illustrated (see attached): judging by those I think it's just an 'F' in a circle, Jacinto, though it may well have started out as you suggest. Either way he follows a time-honoured tradition by artists of signing in ways guaranteed to baffle people in years to come...

What remains is to dig up some biographical details of Harold Forster.

*Note to David / Marion* - This view of the Abbey Works on Art UK https://bit.ly/348gJZy and given there as 'oil (?) on board' is recorded by the NMW on their website as gouache: https://bit.ly/3vdnyF8. It certainly looks more like that than oil.

Harold Percy Forster was born at Brixton, S London, on 12 June 1895 (not 1896 as given in one source), the elder son of Mabel and Alfred Forster, variously a clerk, a superintendent of a ladies' cloaks & mantles factory, and later a manufacturer of the same. The family were unexceptional middle-class, moderately well-off, and somewhat peripatetic, moving from Brixton to Herne Hill to Willesden to Watford during Harold's childhood and youth 1895-1911. A possible clue as to how Harold came to be apprenticed at the age of 15 to the renowned graphic designer Fred Taylor is that his grandfather Joseph was a publisher.

Thereafter Forster seems to have made exceptional progress in his profession, though his public profile then and now is surprisingly low for a man said in 1940 to be "probably the highest-paid commercial artist in the country". He is found in only a handful of newspaper items 1931-39, and most of these are ads or likely 'advertorial' items (attached); in fact he appears more often in ships' manifests than he does in the press. He made several trips to to New York between 1928 and 1947-8, each time extending his length of stay - the last was for nearly a year and with the apparent intention of settling in America...he left as a First Class passenger, but came home travelling Cabin.

There is, however, one important biography to be found in the press (The Bystander April 1940 - attached), and though short we can garner from it a little more. He was wholly dedicated to his commercial practice, and though highly regarded as an artist by contemporaries he rather proudly declared in the piece that he had "never had an exhibition or sent anything to the R.A."; and he doesn't seem to have exhibited after the War either. He was apparently married with three children, but I've been unable to pin down his wife or wedding, nor can I find him in the 1939 Register.

After this he is invisible (bar two NY trips) until his 1950s/60s Welsh industrial work appears. One of those, the big overview of the Abbey Works (https://bit.ly/348gJZy) , appeared in 1957 as a press advertisment (attached) for the the Steel Company of Wales Ltd - the same business whose illustrated calendar was found by Louis.

Apart from mention of him painting a large portrait for the set of an amateur theatre production in West Sussex in 1959 (attached), that is all I could find until his death was registered in the last quarter of 1975 at Hillingdon. There is no sign of a probate or even administration, which rather suggests that little was left of his high pre-war earnings.

It appears that Amber-Harold's great grandaughter is on Facebook commemorating his art work.
https://www.facebook.com/Harold-Forster-British-Artist-120838801284506

Thanks for that, Louis. I've just posted a comment there that links to this discussion.

I have asked Melanie Polledri as Group Leader, Wales: Artists and Subjects and with her other hat on as Curator, National Museum of Wales to sum up and at the same time provide the Collection response to the findings here.

Osmund, I have not forgotten your medium point from 22/05/21 and will address with the updating of the record.

Biographical summary attached (extracted from what's above in April): perhaps Art UK can keep an eye on the recent Facebook link in case anything useful gets added there.

My father signed his work with an F in a circle.
I worked in his studio after leaving Goldsmith's art college.
I was a practicing commercial artist & am still painting after retirement in Eden NSW Australia.
Richard Forster

Richard, welcome and thank you for the lovely family photograph! Thanks too for confirming the style of your father's monogram. It must have been fascinating working in your father's studio after college.

Would you be kind enough to read the draft biography that Pieter van der Merwe has attached (immediately above your own post) and send us any comments/additions? This could be as an attachment to the discussion or by email to artdetective@artuk.org

Many thanks again for getting in touch – it's very good to hear from you!

Harold Forster's son, Richard, has commented: 'I'm pleased that my father has some recognition. He did have an exhibition some time in his early career with I think another commercial artist Andy Johnson but he says the critics stayed away being some snobbery concerning the commercial or as a fine artist. The date or place I have no idea. I have a certain amount of printed work of his which I can transfer to you & information if you so desire. A point that could be made is his ability to use line drawings, watercolour, oil or pastel. He was married 3 times with 3 children & one of his last wife, Sally. We would as a family have gone to the USA about the 1930s but for the great depression.'

I have asked Jennifer Dudley, Curator at National Museum Wales to if she might naturally be in contact with Melanie Polledri for the Group Leader recommendation for closure on this public discussion.

The Curator will be in contact with our Group Leader shortly. The Curator of the Industry Collection has moreover added: 'It’s good to pin the artist of this work down – thank you for passing on the link to the discussion.

The biographical information will also be useful for the other seven works in the industry and transport collection by Harold Forster: 89.9i to 89.14i and 1992.153, all of which are also Abbey/Margam for SCOW in 1950s.

Reviewing 1998.245 in the light of the artist having been identified, I see a strong resemblance to a number of the other works, and the coincidence of date is most suggestive also. SCOW’s commissioning of Cundall and Forster around the same period is noteworthy and I wonder just how many works each produced as part of this commission. ASW’s commissioning of Roche 30 years later is the only comparable Welsh steel industry instance I can bring to mind. The contrast between the numbers of works commissioned by SCOW and the similarly sized RTB is intriguing, especially as the latter firm produced even more brochures for general public consumption than did the former.'