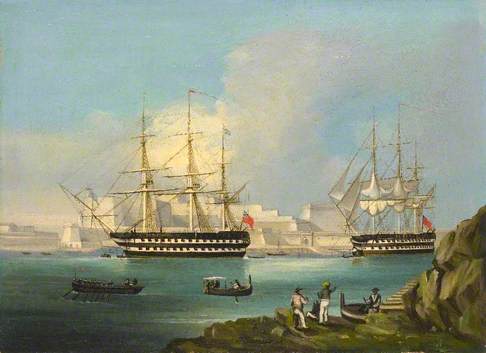 I do not think this shows Plymouth. It is almost certainly Grand Harbour, Valletta, Malta, though which part of the fortification is not immediately clear to me. The small boat with the canopy at centre is a Maltese dghaisa, and that at right partly hidden probably one. Probably 1840s/ early 50s since there do not appear to be auxiliary funnels on the Navy vessels. The moored ships appear to be probably 80-gun two-deckers (certainly 74-plus) of the British Mediterranean fleet, one drying sails, under one of the promontory forts of Grand Harbour: the specific location question is 'which fort?' and the orientation in relation to the harbour entrance. Thoughts on artist would also help, who may be Maltese rather than British, since there was a local marine school 'making hay' from the long British naval presence on Malta from 1804 to its 1960s independence.

This discussion is now closed. The title has been changed, since this is not Plymouth Harbour, Devon, but a view of British two-deckers moored under Fort Saint Angelo in Dockyard Creek, Grand Harbour, Malta, as seen from Senglea Point. The date has been narrowed down from 19th C to c.1850 and a note added to Art UK that the artist may have been Maltese.

The Collection has commented: ‘We have taken a look at the documentation, and it is not helpful. The work is part of the John Lane bequest (1925) and it was believed that all of the works bequeathed had a Devon association. It may be that the harbour scene was presumed to be Plymouth by Lane. I would agree that the details of the small boats do not appear to be compatible with a Devon coastal scene. Is anybody prepared to disagree with Pieter's suggestion of Valletta?

As to the attribution: could it be a member of the Schranz family of painters? More information to be found under the following link: https://www.anart4life.com/the-schranz-painters-continued/

It looks like Fort St Angelo opposite Valletta to me. The shape of the fortifications appear similar to this photo.

I tend to agree with Ms Poole, in that the ships seem to be moored in Dockyard Creek, Grand Harbour, Malta, and that the fort in the background is St Angelo. Not an accurate depiction of the fort's features, but close enough. The walls of Valletta are at left background. Could very well be by one of the Schranz family of artists.

I think this view from the road along Senglea Point today gives a close perspective.

I agree: its a view across Dockyard Creek to Fort St Angelo from the point of Senglea, probably c. 1850, with British two-deckers at anchor (one drying sails) rather than the super-yachts of often shady billionaires one usually sees moored-up there today. Its certainly 'Maltese school' in which 'Schranz' is always an obvious artist default suggestion for such subjects, but there were others though it may be hard to get further on that.

I wonder if these are HMS Rodney and HMS Vanguard ???. I see the problems about which fort is which-they all look alike!!! But I think from the shadows of the figures ,we are looking south.

Of course it could be Bellerophon or HMS Asia. Here is Bellerophon at Valletta.Very similar compositon and rowing boats.
https://commons.wikimedia.org/wiki/File:HMS_'Bellerophon'_{LPARENTHESES} 1824)_outside_the_Grand_Harbour,_Malta_RMG_PY0801.jpg

Possibly Tomasso de Simone (circa 1805-1888)?
I have reversed his “H.M.S. Neptune funnel down and drying her sails off Naples, with the city's waterfront visible off her stern” and used it in a composite, attached.
https://tinyurl.com/3krxk87n

Oh -and Neptune has 18 gun ports on lower deck.

Aha-most interesting-it appears HMS Neptune was cut down from a three decker to a two decker and had a steam driven propeller installed in 1859.The RMG have a block model of the new configuration.

Mr Musgrove, the Fort is definitely St Angelo, and the artist was at Senglea Point facing East or East North East when sketching this picture.

In support of Tommaso de Simone being the artist, please see the attached composite, which shows the men in the foreground of the Art UK work and the men in his (much later) work on the Aspire Auctions website.

“A British Sailing Ship converted to steam power, in the Bay of Naples with Mt. Etna in the distance. Oil on canvas, signed and dated 1868 in the lower right corner”
https://tinyurl.com/s6yp6kkf

Having discussed the ships with a colleague, they are probably late 74-gun third-rates. The last of these without auxiliary steam left the Mediterranean in 1854, which puts a rough 'terminus ante quem' on the image. We can leave the artist issue open a while, including for an enquiry to Malta that I'm making indirectly.

I am not sure this is by a member of the Schranz family, but the prime organiser of the 2018 Schranz exhibition in Malya, Prof John J. Schranz of the University of Malta, would be able to give an opinion. He might well know of other artists working in Valetta at the time.

I think probably not a Schranz family member but possibly a copy by another artist of one of their maritime oils or prints. I've sent the image to John Schranz in Malta.

I've looked at many works by the Schranz family and this just seems to wooden and naive to be by either Anton the Elder or Giovanni, who would be the two contenders. It's stilted style suggests a copy.

Having now looked at a higher resolution image (which Art UK would rather not post here without spcific collection agreement), the ship on the left has a minimum 42 guns in the broadside (at least 11 on the black fo'csle and quarter deck/ poop and 15 and 16 on the upper and lower gun decks below). That to the right has 15 visible above 17 (32) on the upper and lower gun decks though the number above is unclear but it all suggests both are probably about 86-90 guns than 74s. John Schranz confirms that he does not think it is by a member of that family (and it is not of T. de Simone quality either).

As Briony has suggested it might be a copy of something else and having now seen a better JPG, I think it might also be 'British naval amateur' rather than 'Maltese school professional'. If it is broadly lower-deck 'sailor art' -either as a copy or not - then its a good, cleanly done example. If the collection thinks that uncertainty makes it better to leave as 'British school' then perhaps '(?)' should be added with a note that it could also be a local Maltese hand.

The title certainly need to change to something like 'British two-deckers moored under Fort St Angelo in Dockyard Creek, Valletta, Malta, seen from Senglea point'. The image date is still c. 1850 even if execution a little later. Perhaps the collection would like to express its preferences in the matter and , unless anything else comes forward, we could then wrap up.

It's odd that John Lane (as source, pre 1925) might have thought it showed Plymouth: there would have been far more people around then familiar with the Navy's 19th c. history in Grand Harbour. I suspect the post 1925 mis-labelling is just a record glitch based on the assumption that his collection was all strictly Devon-related.

Most definitely NOT a Schranz. Most of the would-be features in it have the feel of being cut-and-paste. Nothing seems to belong in dialogue to any of the other would-be features. Palette is pleasant, except for the foreground.

As to it being a would-be copy of one of the "Twelve Views" - no, it definitely is not. It would seem to me to be some sort of a montage of elements from Schranz works to make it look like a "different" Schranz.

Raymond Millar-I expressed no opinion as to which fort it was .Pieter in the introduction asked which fort it was.And to me they all do look alike.I found it very difficult to find an image of our view - but I have succeded-yes Fort St Angelo from Senglea,and here is a link to an Alamy image that is the same angle. Mind you -that does question the shadow in our painting cast by the foreground figures as the view is to the north east.
https://www.alamy.com/view-from-senglea-over-the-marina-on-fort-st-angelo-in-vittoriosa-in-the-background-valletta-image274232189.html

As to artist-might I suggest Brockdorff who liked to paint the Grand Harbour.Print in the RMG collection.Could be a later copy of one of his prints?????
As to date ,Ithink Pieter has come down to 1840 to 1850 ish-would fit Brockdorff-only three sails per mast- and the ships stationed at Malta then ,are in the records.

C.F. de Brocktorff (c,1775-1850, German/Danish) is known for Malta views after he moved there but relatively few of shipping and mainly in watercolour, or as prints derived from them. I can't see anything like in NMM/RMG's half dozen examples online or elsewhere and given he died in 1850 it seems a bit tight on that ground too, inc. for anything that might have been copied.

I'm not inclined leave this one open indefinitely since I doubt we are going to find a specific name, but would like to have a view from the collection.

According to a webpage on the Rountree Tryon Galleries website, Gregory “was born and lived on the Isle of Wight”. https://tinyurl.com/4x5kvy3y

I have attached a composite that was created using a photo that I could download from zone47.com but the painting is also on Art UK.

That's a well-spotted visual parallel based on slective detail but also a case of a single instance (and one needing a clean) not being enough to base a firm conclusion on. Looking at whole pictures (including the 'Rodney') that Charles Gregory - if it is the 1810-96 man, since there is no immediate authority online for that- seems to be generally better compared to the foreground detail in ours, and Malta is not one of his usual subjects.

I agree with the comment by Briony Llewellyn, 09/09/2021 12:25. It seems to be a made-up view of Malta, sourced from a print such as this copper engraving by P. Romagnoli, “L’Isola di Malta”, from 1850, on the AbeBooks website, https://tinyurl.com/capdas8m, or a Schranz painting such as “Grand Harbour, Valletta, Malta, 1850”, here on the Pixels website, https://tinyurl.com/3a6tyv4n.

My recommendation, broadly as already mentioned, is a title change to:

Artist : British School (?), but noting it might also be by a Maltes painter of the long British rule of the island.

I really don't think its's worth slaving further over, though thanks for the thoughts offered so far. It's sharp as regards the fortifications and ships, decorative and fairly characteristic of Grand Harbour view types, but the figures and foreground are not as good as in other Maltese-hand examples. With luck something convincingly by the same one but signed may eventually identify the artist by serendipity.

Could we progress closure on this on the lines already suggested?Thanks to all who have commented above.

Would Art UK try and get this closed please, as recommended on 17 September 2021 and further prompted on 5 November. As 'old year business' there is no reason for it to drag on into 2022.

Description
Possibly by a Maltese artist.