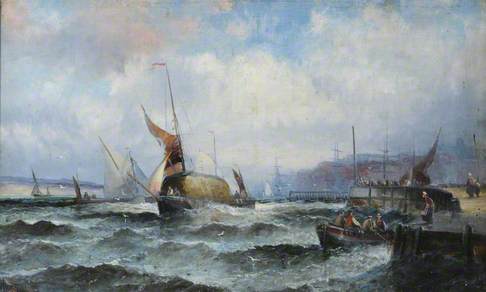 Following a long 'backstage' discussion the previous description/ title of this painting as showing the harbour at St Helier, Jersey, has been changed to something more neutral, as well as the attribution being sharpened to W.A. Thornbery (alias 'Thornley' as he often signs himself) of Gravesend.

The remaining problem is therefore 'where is it' if not St Helier? The Thames barges - the main one loaded with hay - suggest Thames area and the composition is very similar to another currently still misattributed and mistitled Thornbery which may more evidently be a view looking west off Leigh-on-Sea, Essex. https://bit.ly/3qVrCsa. In that case the church high on the right would be St Clement's. If the 'Jersey' one is also Leigh rather more liberties seem to have been taken but it would be useful to have views on either or both.

In my opinion this painting depicts a harbor that is composed by the painter, just fore the composition. So the total scene is the result of his imagination. This was usual in the time that most paintings were made in the studio, using different sketches the artist had made 'in situ'.

The people on the Jetty look a bit Dutch -perhaps.As does the barge on left of the second detail. Enlargement detail of the Stackie possibly???

I assure you this is no more Dutch than Channel Islands. Every vessel you can see other than the rowing boat at right and the masts of square-rigged ships in the right background is a Thames barge.

The building on the cliff often indicates Whitby, but that doesn't ring true with a Thames barge.

The cliffs on the left might help to identify this

The question directs towards the northern side of the Thames estuary.

The painter seems to be associated with the southern side of the Thames estuary, especially with the Medway.

For example, with very similar composition and features, https://www.1stdibs.com/art/paintings/landscape-paintings/hubert-thornley-19th-century-seascape-oil-painting-hay-barge-on-medway/id-a_1725413/

The picture in that (1stDibs) link is another variation on the same theme as the two in question here, and by the same artist: there is no 'Hubert' Thornley though it is one of the names claimed for him, as for example here (which muddles three separate men, though all the pictures appear to be by W.A. Thornbery, alias Thornley) :

https://www.jamesalder.co.uk/william-thornley/#:~:text=William Thornley also went by the names of,1881 and a third place medal in 1888.

The one in the IstDibs link is clearly signed with Thornbery's 'WTHORNLEY' alias at lower left and -more interestingly - inscribed by him 'MEDWAY' at l.r. None the less I cannot think of anywhere on the Medway with a church like that on a height like that and it also looks like St Clement's at Leigh on Sea, Essex, seen from the south-east.

Photo views from river level at that angle are hard to find but this is one from south-west: https://www.alamy.com/stock-photo-the-historic-town-of-leigh-on-sea-seen-from-the-west-while-the-tide-83376934.html

Here is the church aerially from the west with the river at right:

and more conventionally from about the same south-eastern angle as Thornbery usually paints it from the river:

In all the paintings the vertical scale (and general drama) is exaggerated, but there are plenty of precedents for that and silting has not left so much nvigably open water off the town today. It's also not 'Medway' but his name wasn't 'Thornley' either so the apparent misdirection looks like potboiling carelessness, and he certainly churned things out in large number.

The coast/river side opposite Leigh is low lying, although there is a ridge c. 1 1/2 miles behind it - but did the artist combine different views in the same work?

it seems too wide for the Medway, but could this be a view east from Rochester/ Chatham and the church on the hill be that of Gillingham, back from the river?

Amid general artist images of the Medway (at least marine ones from the river) views off Gillingham are scarce and all four on Art UK generally 'flatter' and more rural. This earlier Muller is the best of the church:

This one by Pettit is from the same aspect as Thornbery, i.e distant church on the right as regards the shipping:

That, however, is looking east down river, whereas in all the Thornbery 'riffs' on what is clearly the same place/source, he is fairly clearly looking broadly west, with 'seaward' behind him.

I agree with Anton's initial comment that these are not 'on-the-spot' records but well familiarized studio-production repeats with variations and dramatization thrown in. The fact that Thornbery largely worked from Gravesend, however, in no way confined his subject range to south of the Thames as the pictures shown in first link (to the James Alder site) in my previous comment demonstrate.

This could be Swale Quay ,with the Holy Trinity Church Queenborough in the distance-that has a similar tower.
BTW. That stackie in the 1st dibs- nice clear view-really odd for a Thames barge !!!

The only thing in favour of Queenborough is that today, as then (though not now the case at Leigh) there is the open water: but the land is even flatter than at Gillingham and it would also have to be a view to seaward, not from it. The 'stacking' of the barge is fairly typical - hay inbound for London over heavier cargo below, often bricks in the hold with vegetables and the hay on top. There's an excellent one of the same swim-head ketch/yawl-rigged type swim-head type in Turner's 'Purfleet from the Essex shore' sold at Sotheby's on Wednesday 7 July (ex-European private collection and its first public appearance since 1945): even Butlin & Joll could only get a B&W image for their Turner cat. raisonnee, but seeing it in colour now confirms the deck cargo as cross-stacked cut timber rather than bricks (no hay):

Perhaps the best way to get to an end on this is via the other painting mentioned in the original question above, and other Thornberys more obviously related to that (ignore the current title and artist attribution on it): https://bit.ly/3qVrCsa

The church on high ground at right in that is fairly clearly the same one as seen at left, from the opposite direction, in the following picture already identified as Leigh on Sea looking east at sunrise (the church being St Clement's):

The painting Guillaume has already produced is based on the same place (Leigh) looking west, despite the 'Medway' inscription it bears:

The 'Harbour entrance' one is less specific as regard the 'church' feature, which appears more a ruined tower but it also has a parallel in this 'Mouth of the Thames' upright-format example, in which the Thames barges at left and their grouping are identical (but minus the load of hay):

That too has high ground to the right (no church or tower) but could not be Leigh anyway given the size of the steamship shown below it. If a specific place (which I doubt) it would have to be further west along the Kent coast.

Perhaps it is just best to conclude that Thornbery was turning out large numbers of Thames paintings, sometimes based on specific topography - the broad channel between Two-Tree Island and Leigh-on-Sea being one - but sometimes so 'detuned' as to be only imagined thematic generalisations. If so the 'Harbour entrance' one suggests he may have had the geography of Leigh and the opposing shore in mind, but that's about all.

Unless anything else to the contrary appears I'll suggest closure on those lines in the week of 19 July.

Nice.
Opportunity to convey this concisely?
'Capriccio of the Thames estuary about Leigh-on-Sea with barges and people on choppy waters'? :-)

It's probably better to avoid using such Italianate art-historical preciosities as 'capriccio' for paint-by-the mile, cut-off-by-the-yard work by such a late-19th/ early 20th British commercial operator - albeit not different in principle from many more illustrious predecessors! Perhaps something more like 'Estuary scene, with Thames barges and other shipping'. The possibility it is based on Leigh should however be noted.

Here is Old Hulks at the mouth of the Medway. Misnamed in the same collection as Barges on the Medway. The Prison Hulks ( Identified and matched from other images )were on the Medway by St Mary's Island and in the distance to the left you can see our church again. :-)
https://artuk.org/discover/artworks/barges-mouth-of-the-medway-208382

Yes: that's the painting at the shortened first link in my comment at 11/07/2021 11:59 above. It is much more clearly Leigh from the west and sorting out the current dog's breakfast of both title and artist is being pursued (offline) with the collection by Art UK.

I do admire the Thornley Thornbury's enterprising production. Here our plucky little thames barge has made it up to Whitby.
https://www.baronfineart.co.uk/paintings/william-thornley-whitby/
PS> Pieter- my Hulks link was to the actual painting of the Hulks- not the misnamed painting of barges that was wrongly labelled as "Hulks on the Medway"

The (shorter) tower of Whitby church is at the end of the building, not centrally, and to get the aspect WT shows you would be looking directly into the enclosed harbour, not into shipping-crowded estuarial distance. Painters of views off Whitby almost invariably also include the Abbey , just south of the church,, which is what you would see most prominently looking up the coast from the south (i.e. land to the left as here).


Sorry about the other pic. confusion: the 'Barges' one is also almost certainly Leigh-inspired - unless perhaps Gillingham given there may be buildings to the right. In either case one would be looking directly at the shore (ie no channel beyond the central barges group) and broadly north at Leigh and south at Gillingham, rather than into sunset or sunrise. Thornbery does not seem to worth 'on oath' as regards his locations. If there is to be discussion on the 'where?' of that one it would better raised separately.

I suggest we move to winding this up. Having considered elements in the picture as 'lifted' from places as far apart as Whitby, and Thames/ Medway possibilities, it really seems topographically unspecific save in the dominant presence of Thames barges.

Hay as deck cargo, shown on that in the centre, was above all an inward one to London from the Thames estuary and adjacent east coast, and the barge itself (with or without it, but in the same visual aspect) is a recurring motif in a number of Thornbery paintings to which links have been provided with either similar or different backgrounds. While this one is not credibly off Leigh on Sea, the relationship of land and water there is similar in plan, though not with anything like the height of coastline, but it was a place that Thornbery also painted more credibly on other occasions so possibly his general model.

The title has already been changed once by Art UK and collection discussion from 'St Helier' to 'Harbour Entrance with Thames Barges and People'. I think that could be slightly improved to 'Estuary scene with Thames barges and people' possibly adding 'in rough weather', but leave that to the collection and Art UK to resolve and let us know. Many thanks to everyone who has made suggestions.

Just a prompt to wrap this up as suggested immediately above: it's (I hope!) the last one from a group of Thornbery paintings in various places to be 'disentangled' in subject terms and just hanging around over-long for no necessary reason.