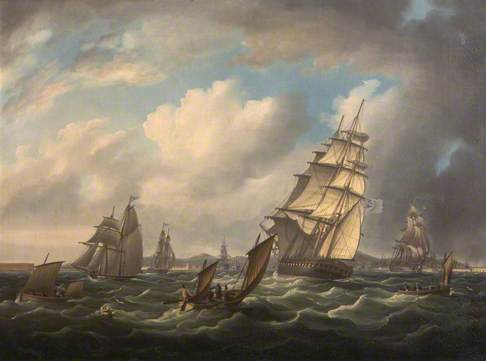 Are there any suggestions for the location of this scene, with evidence? It is not easily identified even when apparently the same and seen more clearly (but a bit closer in) in a painting at the Britannia Royal Naval College, so far just described as 'Seascape' by 'unknown artist' but also fairly clearly by Thomas Buttersworth from its style:

Is it Plymouth in both? There's either a breakwater or something similar to the left (that at Plymouth was built in the 1820s) and apparently masts rising above low-lying white buildings at far right. The three luggers in the foreground all look fine for British south-coast craft and it’s clearly a naval port from the other shipping: I just can't square the location with my admittedly hazy recollections of Plymouth and views of it.

The Plymouth canvas is illustrated as one of the Buttersworth examples in E. H. H. Archibald's 'Dictionary of Sea Painters' as 'Shipping off Plymouth', so presumably that has some basis – but more detail would be useful.

This discussion is now closed. The title has been amended from ‘English Men o’ War’ to ‘A British Frigate Running into a Fortified Naval Port, amid Other Shipping’. The location could not be identified.

Something is wrong about accessing art uk from here

Hello – Art UK is temporarily down, but we're working to fix the issue and it should be back shortly. Please bear with us!

The website is back up and running, apologies for any inconvenience.

My first enlarged crop shows the horizon and the features above it the second a distinctive pale building. If we had access to a higher-resolution version of the original, we'd be able to see more here.

Is there any reason to think that this is a British port at all?

Could it be a Spanish port?

Can I suggest that Portsmouth is considered as the possible location for this painting. The western side of the channel (if this is a north looking view) features a long straight embankment, as in this painting. Immediately to the west of the channel is Fort Blockhouse with its castellated wall. Further to the west, the red bricked building is Haslar Hospital. The castellations suggests that this was painted pre-1813, when the sea-facing wall of the fort was rebuilt as a casemented battery.

Could the label on the stern of the most prominent vessel be enlarged, as it may be legible?
Could all the vessels depicted have been in use elsewhere than in Britain - for instance in one of the places under British rule - such as the West Indies?

Attached is a composite of two images, the one on the left being the subject of this discussion. The one on the right, which is in a private collection (and possibly having been bought from an auction at Bonham's), is entitled 'Euryalus' (Capt. Blackwood), 'Thunderer' and 'Ajax' leaving Plymouth on the way to Cadiz and the Battle of Trafalgar', and is also attributed to Buttersworth.

If this latter painting's title and attribution are correct, then it appears that this discussion's painting is also of Plymouth. The similarities of the details in the two paintings are quite obvious , especially of the central two-masted "luggar" in the foreground of both, the gently undulating profile of the low hills behind the port, the large building on the left-hand-side of each painting, and the white building (or is it a pier and lighthouse at the entrance to the harbour?) that sits brightly in the middle of each. If the right-hand-side painting was executed in or shortly after the action of its title then it dates from 1805/1806, when Buttersworth was 37/38 years old.

If Buttersworth was the painter of all three of these works, it might be that they are all variations on the same theme of (the same three?) fighting ships heading from Plymouth to the Battle of Trafalgar in October 1805. Naval experts might be able to verify their identities and confirm this suggestion.

"Could the label on the stern of the most prominent vessel be enlarged, as it may be legible?"

Again, the low resolution of the available versions of the image mean that no useful information is obtainable.

Additionally, for the sake of visual clarity, here are the three paintings in a composite image, with the attributed Buttesworth/Plymounth canvas in the middle. All three paintings could have been executed using Drake Island, off Plymouth, as the viewing point.

For some reason it would appear that the composite images that I posted on the above comments have disappeared from the site. I attach both of them again here. Hopefully they will remain as posted.

Composite 1: Canvas on the right, which is in a private collection (and possibly having been bought from an auction at Bonham's), is entitled 'Euryalus' (Capt. Blackwood), 'Thunderer' and 'Ajax' leaving Plymouth on the way to Cadiz and the Battle of Trafalgar', and is also attributed to Buttersworth.

Composite 2: Three paintings in a composite image, with the attributed Buttesworth/Plymounth canvas in the middle.

Is there a problem with the Art Detective site? The second attachment did not appear, so here it is again....

Opps...typing too fast. Plymounth above should, of course, read as Plymouth!!!

This discussion has been dormant for a long time, and I wonder if anybody has further comments? Kieran's composite images were very helpful, thank you. I also wonder whether we should reconsider Cliff Thornton's suggestion that this is Portsmouth and not Plymouth. In 2008 Sotheby's sold this indistinctly signed Buttersworth called 'Men-of-War off Portsmouth Harbour:

The church on the right could be the tall building in the painting under discussion. Artists often exaggerated the height of hills to add interest to the composition, so we shouldn't take them too literally.

I have to admit I haven't been off the coast of Plymouth or Portsmouth for a long time.

Not the best image, but I hope this helps at least helps with the location discussion.

Here is another work by Thomas Buttersworth that supports Cliff Thornton’s view, and Sheena Stoddard’s view, that the location depicted is Portsmouth. Notice the same spindly masts appear in the centre of this work and the work we are discussing. It is lot 264 of Sotheby’s April 14, 2011, auction.

A better image is here on Wikimedia Commons:
https://tinyurl.com/s23xerdj

David’s new image reveals the blue flags on some of the vessels. I understand that these are related to Rear-Admirals. Here is some information about flags on the website of the Royal Naval Museum. https://tinyurl.com/ypm75sw6

I'm seeking some other views: now we have this panoramic enlargement I'm sure it's not Portsmouth and almost as much so Plymouth. There's a massive brick fort (probably offshore) to the left. and a harbour at centre enclosed on the left by a crenellated/ fortified jetty ending in a tower with buildings suggesting a small town. At centre in the harbour, to left and right of the British frigate seen in stern view heading in, are a fully rigged two-decker and at least five other ships struck down to lower masts only before one gets to the enclosing arm of the bay on the right, covered with low white (barrack?) buildings. Behind them are four more probably smaller ships fully rigged and more 'in ordinary' indicated only by the visible lower masts and tops seen above the buildings. It looks a fairly major naval operation but I can't think where, be it British -as one might assume from the shipping - or otherwise.

The schooner (left) and brig (right) to the left side both fly unfamilar triangular pennants -blue in the latter case though the schooner's might be a Dutch tricolour (blue/white/orange). The luggers in the foreground certainly look British types. The white ensign on the central frigate is unusual - normally RN ships flew red unless specifically attached to a squadron under a flag officer of another colour (blue or red) and I can't see a St Patrick saltire red cross overlaid on the white saltire of St Andrew. That would indicate pre-1801, though it's not the general date feel -especially because of the brick fort to left. Though deceptive the land behind could also be an island given the way its shown and, given the amount of naval shipping, if its 'colonial' that's also hard to suggest where.

I am grateful for the following comments from my historic photos colleague, Bob Todd who is tenacious in image identification broadly post 1860, including from earlier paintings if they contain either technical or topographical detail that may have lasted into the photographic era:

'I have been through all of the locations I can think of and have drawn a complete blank. The one thing I can say with certainty is that this is definitely not Plymouth, Portsmouth, Chatham, Sheerness, Pembroke Dock, Harwich or Haulbowline. Ignoring the buildings, the layout of the land is such that I do not think this is anywhere in this country [UK]. As far as overseas bases are concerned, I have been through our photographs of all of the likely places where a British fleet might be stationed but can find nothing that even slightly matches this background.'

We can leave this a little longer but I think we may have to conclude that its a mystery, not least since there seem to be other versions of the background (as per Kieran Owens, 26/12/2017 18:58 above)

Pieter originally started this discussion at the end of 2017 in the hope that the location of this scene could be identified. Its title was once given as ‘Shipping off Plymouth’ (in E.H.H. Archibald’s ‘Dictionary of Sea Painters’, 1980) but the collection now call it simply ‘English Men O’ War’. The discussion has shown that the artist used the background several times and it is unlikely to be imaginary. Unfortunately, it has not been identified and the discussion, after five years, now needs to be closed. Pieter has suggested that 'A British frigate running into a fortified naval port, amid other shipping' would be an appropriate title (pers. comm.). Thank you to everybody involved in the discussion and especially to Bob Todd who does not think that it is anywhere in the UK and says it is definitely not Plymouth, Portsmouth, Chatham, Sheerness, Pembroke Dock, Harwich or Haulbowline [Cork Harbour]. There is also the possibility that the coastline is that of an island, but for the time it remains a mystery.

Thanks Sheena: I agree. With luck something else may turn up to unlock this one, either with a name attached or from a more recognisable perspective.

Thank you, Sheena and Pieter. The curator agrees on updating the title.

Title
A British Frigate Running into a Fortified Naval Port, amid Other Shipping

Acquisition method
purchased from the Leger Galleries Ltd with the assistance of the Victoria and Albert Museum Purchase Grant Fund, 1969