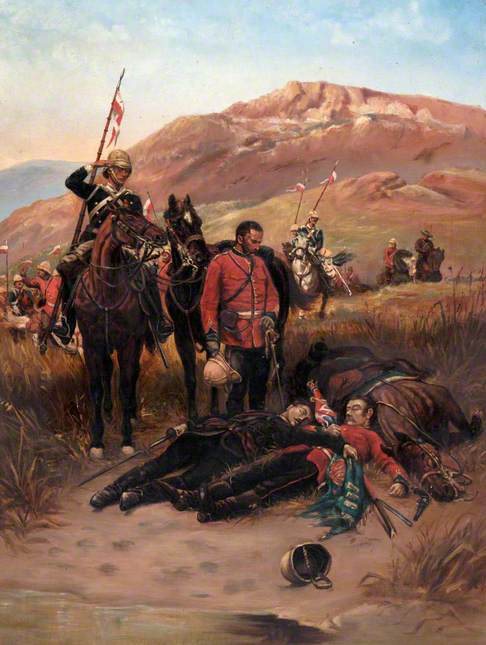 This is a depiction of the death of Louis Napoleon, the Prince Imperial of France, who served with the Royal Artillery in the Zulu War in 1879.

It is not the battle of Isandlwana, as the description suggests. It depicts troopers of the 17th Lancers, who were not present at Isandlwana. It was not until after this that an Imperial Cavalry regiment was sent to South Africa.

Nairn Museum has no further information on the painting and would welcome further detail.

This painting is now titled 'The Last Sleep of the Brave' and is listed as being after Alphonse de Neuville (1835–1885).

These amends will appear on the Art UK website in due course. Thank you to all for participating in this discussion. To those viewing this discussion for the first time, please see below for all comments that led to this conclusion.

No this is completely wrong. The picture is very well-known to Zulu War historians.
It shows the discovery of the bodies of Lieut T. Melvill (in the red jacket) and Lieut. N. Coghill (in the blue patrol jacket) both of the 1/24th (2nd Warwickshire) Regiment having failed to escape from Isandhlwana. They managed to cross the Buffalo river into Natal but were overtaken on the British side of the bank. Both tried to save the regimental colour for which action their relatives received on their behalf posthumous Victoria Crosses (in 1906).
The artist mistakenly included 17th Lancer troopers in the discovery party.

I should also mention that the artist incorrectly shows the regimental colour with their bodies but it was in fact found in the river some days later.

The painting is entitled THE LAST SLEEP OF THE BRAVE by the well-known late 19th century French military painter, Alphonse de Neuville. It, along with SAVING THE QUEEN'S COLOURS, was commissioned by J.G. Murdoch of The National Fine Art Association and exhibited at Messrs. Dowdeswell's gallery in New Bond Street, London in June 1882. Both relate to the efforts by Melvill and Coghill referred to above.
See my British Artists and War...(London, Greenhill, 1993), pp. 193-194

And here is an oleograph after the painting apparently published in 1881: http://www.nam.ac.uk/online-collection/detail.php?acc=1956-02-284-1

More details in this article, which gives the dimensions of the oleograph published in 1882 as 50 x 68 cm; very close to those of the Nairn version, given as 68.8 x 51 cm. The article also mentions that the original, measuring 90 x 125 cm was in a private collection in Natal in the early 1970s.

Lieutenants Teignmouth Melvill and Nevill Josiah Aylmer Coghil both have wikipedia pages dedicated to their lives: as does the artist, Alphonse de Neuville.

A short little article by R.J. Southey entitled 'De Neuville and Isandhlwana' appeared in Africana Notes and News, Vol. 19, No. 6 (June 1971), pp. 253-254. The author discusses the two pictures referred to above and the various historical inaccuracies.

Oliver's link doesn't work as such (a recurring issue that I still don't quite understand). But if you copy and paste the whole text line into your address bar it will take you to the right place. The discussion is on the sixth page, numbered 57: I rather doubt that one set of the prints still hangs in the library entrance of the University of KwaZulu-Natal campus at Pietermaritzburg!

The closeness to the size of the oleograph inevitably raises the question of whether we are again dealing with an over-painted print. But I think there are sufficient differences between the two - notably in the depiction of many areas of grass - to make this unlikely.

The possibility that this is an overpainted oleograph (or any other kind of print) should not, I suggest, be excluded. The grass would be an easy aspect of the image for an 'overpainter' to modify. I wonder if the collection would be able to check the edges of the work (out of its frame) to see if there is any indication of paper between the paint and the canvas.

The collection also has a version of ‘Saving the Queen’s Colours’, for which the same questions arise:
http://www.bbc.co.uk/arts/yourpaintings/paintings/zulu-war-battle-scene-166936

When the originals were sold (as a pair) in 1903, their size was 55 x 40 ins. A bit larger than in the source Oliver provided, and very close to half the size of the two works in the Nairn Museum.

Surely not half the size but twice the size of the works in the Nairn Museum and the ones in Cardiff too. Leads to the conclusion that both sets are actually copies and probably oleographs like the one in the National Army Museum. Where are the originals?

Yes, Andrea, the difference in size is odd - too great (11½ cm in the width, 14½ in the height) to be just conversion rounding. Perhaps the Connoisseur correspondent included the frames. Or it's possible de Neuville painted replicas/other versions - the same Natalia article mentions a composite of both pictures, apparently signed by him, at Grahamstown City Hall in the early 1970s.

Stephen, I'm a bit puzzled by your reference to "the ones in Cardiff" - am I missing something? The originals are probably still where they were in 1973 - South Africa. The c.1969 buyer, Robert ('Bob') Emmett Levitt, was an attorney, bibliophile and "renowned Africana collector". He was Mayor of Westville (near Durban) in the 1960s, and his name survives in the name of a flourishing South African legal & accountancy firm. He (b.1928) may or may not still be with us (his wife Rosamond died many years ago) ; but they seem to have had several children, and there are phone listings for a couple of other Levitts in that part of Kwazulu-Natal. I don't suppose it would be too hard to find out where the paintings went if someone really wants to.
See: http://www.saambr.org.za/uploads/files/bulletin13.pdf (p.12 as enumerated) and http://www.saambr.org.za/uploads/files/bulletin15.pdf (p.2)

Hello Osmund. See the collection of The Firing Line, Museum of the Welsh Soldier, Cardiff Castle. They have a version of Saving the Colour.

The one in Cardiff looks suspiciously close to the chromolithograph:
http://www.bbc.co.uk/arts/yourpaintings/paintings/saving-the-queens-colour-at-the-battle-of-isandlwana-154306
http://www.nam.ac.uk/online-collection/detail.php?acc=1956-02-285-1

Can I suggest we formally recommend that this painting is retitled 'The Last Sleep of the Brave' and described as 'After Alphonse de Neuville (1835-1885)'. I will propose discussions to similarly retitle and reattribute the 'Saving the Queen’s Colours' at Nairn, and to suggest that the 'Saving the Queen’s Colours' at Cardiff Castle Museum of the Welsh Soldier is in fact a chromolithograph, not an oil painting.

The collection has been contacted about the recommendations.

Title
The Last Sleep of the Brave