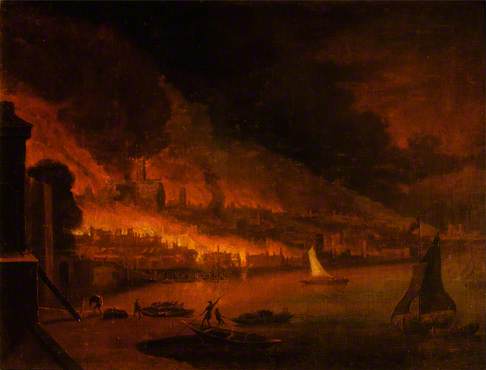 I am wondering whether the attribution to Daniel van Heil can be justified considering he died in 1664.

Most of the paintings of the Fire are anonymous and seem to derive from works by Thomas Wyck or Jan Griffier. This is close to a group of paintings attributed to ‘Waggonner’ (mentioned by George Vertue) or Dutch School or Anglo-Dutch School etc. and there is an example in the Society of Antiquaries.

and the Guildhall Art Gallery.

The title and whether the painting does depict the Great Fire of London in 1666 (outwith the dates of Daniel van Heil) is also an interesting and worthy of a discussion. London was not the only city that experienced catastrophic fires in the seventeenth century, but it is probably the most documented.

There was a catalogue entry with Christie's from 1974 that attributes the painting to van Heil but it is simply entitled ‘A Conflagration of a Town by a River’.

The version at the Society of Antiquaries might be by one of the Pether's (Abraham?) - the moon upper right is very typical of them:

There seems to be a large bulding with a very tall tower slightly left of middle, which does not look like a church (more like a factory!). Also, to the very right is another building with two towers. Do they correspond to any historical records for London? The old St. Pauls had a spire. This does not look like London to me. And yes, several other cities suffered great fires. Unable to determing whether the water is a river or the sea.

Abraham "moonlight" Pether is mentioned in the recentl Society of Antiquaries catalogue of their paintings. fyi, the painting was restored in 2013 and the moon removed!!!

There is a strong case for this being the Fire of London (and thus not connected with van Heil). It shares its viewpoint and its composition with the other two images referred to, in the Guildhall and the Soc of Ants, and less strongly with the one in the Museum of London. The first two clearly show the Tower of London, London Bridge and Southwark cathedral to the right, confirming London as the location. The NTS picture also shows the Tower of London.

Since it is likely none of the artists saw the city or the fire at first hand, other details of churches etc are inevitably mostly speculative - although there is consistency in the positions of the churches to the immediate left and right of St Paul's.

There is or was presumably a common source for these three images at least. The Museum of London version and an unrecorded one on pinterest (see also http://www.london-fire.gov.uk/great-fire-of-london.asp) seem to be still cruder derivatives.

This will not be the painting sold in June of 1977. The Christie's entry for 1974 is a recommendation to the owner of potential sales to be made from the property. However, that painting was retained and remained with the property when it was handed over to the Trust after that date.

The spire of old St Paul's was destroyed in 1561 and the building in the centre of the composition accords with the Cathedral's appearence in Visscher's panorama of 1616. I agree with Andrew that the rest of the topographical details are probably speculative, if the painter was not based in London, although the Tower of London to the right of the painting is in approximately the right place.

Thanks Simon, I fell for the sleight of paint. I wonder about Jacob Knyff (Knijff) as a possible author for the Soc Ant painting. A version of the Fire of London apparently by him was sold in 1691. His view of Chiswick shares a similar format and composition.

I would be interested in the reference to a painting sold in 1691. Thanks. I think finding an attribution in the derivative versions is unlikely unless they are signed! There is one of the Great Fire by Lieve Verschueir in Budapest.

On the Getty provenance database sales index do a search for 'Fire of London' and you should find the reference (direct links won't work with the website). The sales of the Waggoner versions are also recorded, as are many others.

Thanks. Other names such as Egbert van der Poel, Jan Looten, "Old Knife", Peter Monamy are also mentioned in sales from 1689 onwards ...

Not much like Jacob Knyff, and even less like Leonard (are there any other examples of Fires of London by either?) and Waggoner/Wagoner is a mystery. Artist search in the Getty sale index produces ten 'seaport'-type works under the first and two under the second (inc a 'Frost on the Thames') - but no Fires buy that route - and all between 1690 and 1692.

The immediate bell it rings to seafarers is as a corruption from the Dutch. A 'waggoner' is an early form of sea atlas, from Lucas Janz. Wagenhaer, 1533/4-1606 (not in Getty) the navigator/cartographer of the first one, titled 'Spiegel der Zeevaart' and of which the 1588 English version was 'The Mariner's Mirror': but while a mapmaker there is no suggestion he was a painter. If he had a relative who was that does not seem obvious.

Dear Peter van der Merwe,
Thanks for bringing this to my attention! I did not know it. I have just published an essay on depictions of the Fire of London for the exhibition Nature Unleashed, an exhibition now at the Hamburger Kunsthalle, which is why I was interested in the Haddo painting in the first place. The exhibition was to include a little-known painting preserved in Budapest, but alas funds did not stretch so far. Nor could any paintings from the Museum of London be borrowed. It is surprising just how many paintings there are of the Great Fire although many are derivatives.

Many thanks indeed, Simon

Not really without seeing the picture(s) in the flesh -- I saw ones mostly in London collections. It is the good old game of identifying the best ones from the derivative ones.

Glad that's useful: unfortunately I only saw it in the catalogue yesterday... Just in case it's not clear the other picture I mentioned as (I think) no longer with Barclay's was a 19th c. one, not another Wyck.

Does it get us anywhere on the picture under discussion?

The previous comment was from Pieter in July 2018. It has been agreed that this is The Great Fire of London, but would anyone like to comment further on the attribution?

Title
The Fire of London