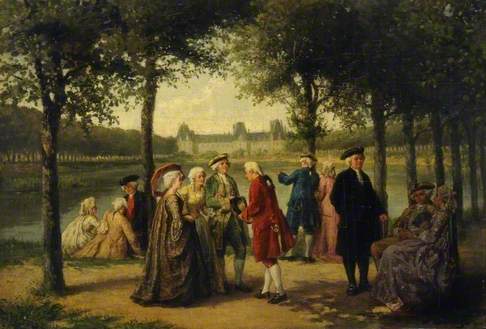 The roof line of the building in the background does not suggest Versailles. It looks more like Fontainebleau.

There are a number of photos on the web showing the chateau with its various pools in the foreground though I have not been able to discover one with a corresponding aspect. It struck me that the high roofs of the pavilions shown here were more typical of Fontainebleau than Versailles.

This discussion is now closed. This painting has been renamed ‘A Promenade at a Chateau in the Time of Louis XV’, since it is likely to be an imagined location whose architecture and landscaping are loosely based on Fontainebleau and Versailles, and possibly other chateaux in the Île de France.

However, the positions of the extensive water and the two avenues of trees either side between figures and the distant chateau is difficult to square with Fontainebleau. If we are to assume that the reference to Louis XV in the title is accurate perhaps we should be looking for other palaces or chateaus associated with this king?

It is not totally unlike the Fontainebleu arrangement of lake, trees and house here: http://iledefrance.ca/fontainebleau/lake.html. And one can asume a fair bit of artistic licence.

I once lived near Fontainebleau and used to tour the Île de France extensively. "A fair bit of artistic licence" is one way to put it. "Mashup" is another. I doubt that this depicts one place.

The hipped pavilion roofs and the low height of the building suggest Fontainebleau. Actually the roofs seem closer to the outer pavilions at Vaux-le-Vicomte (from the moat). The separation of the pavilions does not seem true - more like the Louvre, but without its curved central pavilion. Versailles has a characteristic extra storey, and does not (and I believe never has had) such a roof line.

The (huge) carp pond at Fontainebleau goes right up to the building at the apex of its right-angled triangle. You'd never get a rectangular, face-on impression like this, and there is a suggestion of land between the building and the water. This seems more like the layout at Versailles, but is too narrow and unindented to be the Grand Canal. The artist has possibly transferred the water to the rectangular tree-lined area that lies between the canal and the palace. I'm also reminded of a vista at the Château de Courances, near Fontainebleau.

I also entertained the thought that this might be in the Loire Valley, but I couldn't find a suitable candidate.

So I suppose that, as a C19 artist, Dansaert composed from several references for the palaces of Louis Le Vau, not to mention the period dress.

The collection would be on safer ground with "A promenade at a château in the time of Louis XV", with notes for viewers that the architecture and landscaping is drawn from the great palaces of the Île de France such as Fontainebleau and Versailles.

Malcolm's suggestion is very sound. Dansaert was a Belgian painter of invented 18th century subjects . He seems to have had no intention to be historically accurate. The vast majority depict interiors. This depiction of a park is somewhat unusual. What is uncertain is how much he gained from nineteenth century staging of plays requiring eighteenth century costume, but it does not seem that specific references to theatrical performances.

I originally thought the asymmetry of the pavilions on the building's façade slightly resembled that of Fontainebleau facing the grand parterre, but it's not close enough. And the configuration with the pool certainly does not reflect the arrangement at the chateau. So, until such time as someone identifies the site accurately (if that's at all possible per Martin's suggestion) I agree with Malcolm's proposal of a revised title for this work.

Could it be that, although possibly created out of his pure imagination, and therefore lacking in architectural and facial accuracy, Dansaert is making reference to Benjamin Franklin's period as effective US Ambassador to France, a post he held from 1776 until 1785? If so, the period depicted in this painting is that of the reign of Louis XVI, which ran from 1774 until 1792.

The attached composite shows another painting by Dansaert, entitled "Benjamin Franklin in the Studio of Houdon', in which Franklin is depicted wearing the simple black dress of a Quaker, with silver square buckles on his shoes and wearing a white cravat, just as the man in black in this painting is wearing. The bust in question is that as fashioned in 1778 by Jean Antoine Houdon (1741 - 1828), which is now in the Metropolitan Museum of Art in New York.

A painting by entitled 'John Paul Jones and Benjamin Franklin at the Court of Louis XVI', by Jean Leon Gerome Ferris, also shows Franklin in the same simple Quaker dress.

The Wikipedia extract for Franklin's time in Paris states that "In December 1776, Franklin was dispatched to France as commissioner for the United States. He took with him as secretary his 16-year-old grandson, William Temple Franklin. They lived in a home in the Parisian suburb of Passy, donated by Jacques-Donatien Le Ray de Chaumont, who supported the United States. Franklin remained in France until 1785. He conducted the affairs of his country toward the French nation with great success, which included securing a critical military alliance in 1778 and negotiating the Treaty of Paris (1783)."

Additionally, the composite also shows a painting by Dansaert entitled 'La Fête au Village', which contains a cast of similar characters as can be seen in this discussion's painting, including the lady with her looped-up hair style and the man in red with his sword protruding from under his coat tails.

If the building in the background does show Versailles, albeit inaccurately, then the scene could describe a quiet moment during what the Chateau's website describes as Franklin's connection to that chateau:

The chateau in the background could be Fontainebleau, or certainly an approximation of it, but it is not Versailles.

I'm pretty sure the gentleman in black is not meant to be Benjamin Franklin - I think he's just a cleric. Though the resolution is not high, he appears to be depicted wearing a wig - see attached blown-up detail. Certainly he does not have the shoulder-length natural hair that Franklin famously wore while in France. As far as I know all his contemporary French portraits (including the Houdon bust) show him thus, as do later imagined ones like your Ferris and other Dansaert ones...precisely because that was and remains one of the things he was best remembered for!

I can't say I've seen him wearing black before either - he certainly favoured plain clothes, but usually in grey or dull earth colours; and although one obviously cannot expect Dansaert to have been an historical dress expert, the lower hair styles and sack-back gowns of the ladies, and the long waistcoat of the central gentleman, suggest he was aiming at a date no later than the beginning of the 1770s, and probably earlier - i.e. Louis XV not XVI.

In the official catalogue of the London International Exhibition of 1873, on page 14, the following entry can be found:

Dansaert (1830 - 1909) would have been 33 years old in 1873, so the chances are that the work was bought by Mappin not too long before that year. Whenever he did purchase it, the listing helps date the picture to before 1873. It was owned by Mappin until the day of his death. That said, Dansaert had exhibited at the Glasgow Institute of Fine Arts as early as 1863, when he was 23 years old, so this work could date from as early as then.

The 1914 catalogue of the Mappin Art Gallery's permanent collection lists the painting, on page 19, as one of the 154 (sic) paintings bequeathed by Mappin to the City of Sheffield. It is described thus:

Given all of the above, does this discussion need to go any further? The words "Promenade of Versailles" could be changed to "Promenade at Versailles" and the rough date of "Between 1860 and 1873" might be considered, but beyond that is there much to really discuss?

The problem is that the building, while obviously a chateau, is not Versailles. As for the date, "c. 1870" is probably reasonable.

It seems quite likely that Mappin bought it in late 1871/early 1872 from 'The Flemish Gallery', a peripatetic business that sold modern continental paintings from various different premises in St James's, London, during the 1870s.

In late 1871 they seem to have taken a short lease of what had been Crockford's Club in St James's St, and amongst the many hundreds of paintings they had on display were six by Dansaert...and one of them, no. 205, had exactly the same title - see https://bit.ly/2W4ddwT. It's only a snippet view, but I've managed to cheat an image of the whole (very short) catalogue entry (attached). The date is not evident, but various reviews of the exhibition, e.g. https://bit.ly/2E8hQfe & https://bit.ly/2JCFfsy, give us a date of November 1871 for its opening. When the lease expired three months later the unsold paintings, including at least one by Dansaert, were auctioned off on the premises 21-23 Feb 1872 - see https://bit.ly/2JjOZc1.

What the original French title was we can only guess at: I rather doubt that Dansaert - a Belgian, but one who trained and worked in Paris - would have called it this. I suspect it acquired the 'Versailles' moniker over here - "new money" Victorian collectors like Mappin were far less educated and travelled than their predecessors, and the title was probably designed to appeal to buyers with scant knowledge of France.

I propose wrapping up this debate. The most likely solution, given by Malcolm Fowles, is that Dansaert composed a fantasy scene, and that the architecture and landscaping are loosely based on Fontainebleau and Versailles, and possibly other chateaux in the Ile de France. The painting should be retitled, as he suggests: "A promenade at a château in the time of Louis XV".