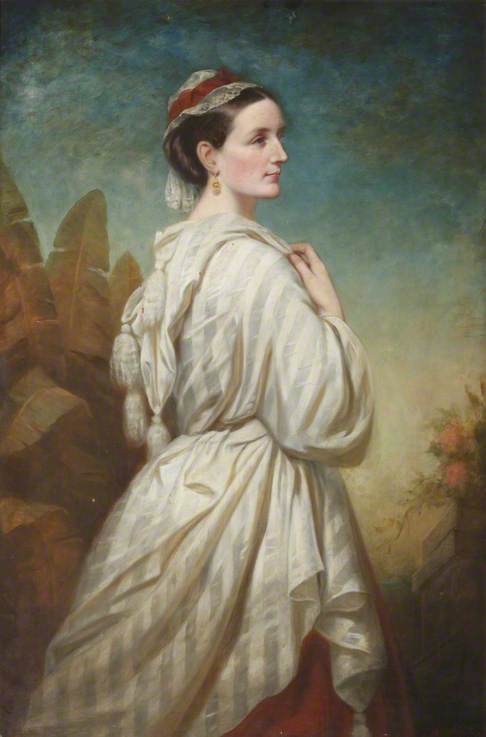 We have 5 paintings in the College collection signed Herrick, in red and also in capitals most of them.

Are they by William Salter Herrick?

We have them attributed to R Herrick but we do not know why!! We cannot find an artist called R Herrick.

Can anyone help with an identification of the artist? Maybe by a comparison of signatures?

How else could we discover the true identity? Through sale catalogues? information on commissions? the family archives? The family who are painted..Isabella, James and Godfrey Arlosh are from Wreay, Cumbria originally. There are 2 of an unknown man and woman...we think associated with the Arlosh family.

Here are links to the other 4 paintings.

I have now spoken to the collection over the phone and they are happy for me to close this discussion and to attribute all five works to William Salter Herrick.

These changes will appear on the Your Paintings website by the end of August 2014. Thank you to all for participating in this discussion. To those viewing this discussion for the first time, please see below for all comments that led to this conclusion.

How and when did you acquire them, and what attribution was given at that time? If there is a paper trail then the artist may have been named then. Of course, it could be that the artist was incorrectly identified a long time ago, but you would at least narrow down the period of time in which the mistake could have arisen.

But as you doubt the given identity of the painter, do you know something about the sitters that leads you not to doubt their identities also?

You wonder if a comparison of signatures could help. Are any of these pictures signed? What, if anything, is written on the backs? Often that is a very fruitful place to look for information like this.

Have you looked at the papers of Joseph Blanco White in Liverpool which apparently included as photograph of one of your portraits of the Artlosh family , a half length allegedly of c. 1826? This is said to be mentioned in the life of White under 23 August 1826
Are there any papers, inventories of the family in Cumbria Record Office?

The portraits may also be recorded in a family will. Your portrait of a lady seems to be signed bottom left HERRICK 1882
None of them seem to be the same hand as the paintings by William Salter Herrick recorded on BBC Your Paintings

I think we can rule out T.H. Carrick. I am familiar with his work and this is very unlike his style, and far too large!

Andrew, it is not this painting about which I am writing but a painting by a very different hand half the size of this and a half length - one of the other painting referred to above. She is resting her face on her hand and holding a bird

There are Arlosh papers and correspondence in the Cumbrian Local History Library in Carlisle [B202] as well as the auction catalogue of the sale of the late J. Arlosh at Woodside near Carlisle held by Robert Dalton & Sons on 24, 25, 26 and 30 January 1902 [2B9 WRE9]

It is possible that Tullie House Museum and Art Gallery in Carlisle, and Abbot Hall Art Gallery in Kendal have files on [1] a painter of the name of Herring practising in Cumbria in the second half of the 19th century [2] on the Arlosh family's portraits and collection

I know nothing about (& hate) Victorian portraiture, but I have to admit that I thought the idea that James and Isabella were by WS Herrick was reasonable. The treatment of Isabella's head, for example, is markedly similar to the mother in the WS Herrick picture at Aberystwyth, for example. The quickest way of arriving at a sensible view on the attribution will be to send good, crisp photographs (not PCF print outs) to Martin Beisley in the Victorian department at Christies. Doubtless his email is on their website, to speed things up.

The prominent inclusion of a banana plant is interesting, too.

Worth knowing, in case of confusion, that there were 2 James Arloshes in Cumberland. One, who was ordained, changed his name from Losh to Arlosh (The Times, 4 July 1870).

Steady on, Richard. Some of us study this stuff. But I do agree that the portraits of Isabella and James Arlosh are absolutely consistent with the style and output of William Salter Herrick. There isn't really any need to look further for an attribution, although further looking might be informative about the family and occasion for the commission.

This may be a co-incidence but it may also explain why William Salter Herrick signed the portraits R Herrick. The 17th century poet Robert Herrick married Susanna, the daughter of William Salter. There may be a family link and hence the use of the initial R.

Thank you very much for all the comments and information. You have given me a great deal of information to work with and I am very grateful indeed.

Sorry Barbara. I hope Donato's not following this!

Jenny Uglow's biography of Sarah Losh of Wreay, (The Pinecone, Faber & Faber 2012) has a family tree and information on the extended Losh family. James Arlosh was Sarah's first cousin once removed, and the eventual inheritor of her house, Woodside. James left his estate to Manchester (now Harris Manchester) College. The contents of Woodside were sold by Daltons as mentioned above (in 1912, not 1902).

An Australian genealogist, who seems to have seen the Daltons' catalogue, posted a query on a genealogy website in 2007 about some of the paintings sold. These include portraits by Herrick of Mr and Mrs Arlosh and Mr Arlosh Jnr as a child, as well as other portraits of the Losh family and their connections. (Information originally from Rita Lamb).

Re the comment above about two James Arloshes, I believe they were one and the same. Sarah's cousin, who changed his name from Losh to Arlosh, was ordained, but renounced holy orders in the 1880s when he became a Unitarian. He was the husband of Isabella and father of Godfrey.

The five portraits in the Harris Manchester collection are absolutely consistent with the style and output of William Salter Herrick (who exhibited at the RA between 1852 and 1880), so that is the attribution neatly tied up. The collection may like to pursue the family history and provenance in more detail but for now the artist listed on the PCF can, if they agree, be changed to William Salter Herrick.