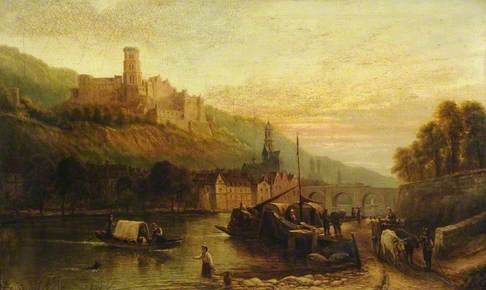 Could anyone provide further details of the life and work of this nineteenth-century artist?

The collection comments: ‘The Ferens Art Gallery holds one work by J. L. Vychan, an undated oil painting 'Drachenfels on the Rhine'. However, like Art UK, we have very little information about the artist. From our permanent collection catalogue ‘From Victorian to Edwardian: The Ferens Art Gallery Collection of Victorian and Edwardian Art’ (published 2009), we know that Vychan was recorded at 29 Bolsover Street, Portland Place, London between 1873 and 1877, and exhibited at the Royal Society of British Artists. His subjects included landscapes from Ireland to Derbyshire, and this one Rhine subject. Christopher Wright, the catalogue author, suggests that “given the general style of the Ferens' painting it is possible that the artist was of continental origin”.’

There is another example of Vychan's work attached: 'Venice' (private collection).

Art UK has no information on the artist and a quick internet search turns up next to nothing, except a Christie's sale (1998) 'Figures Fishing on a Continental Lake'. We know only that in 1886 he exhibited one work at the Royal Society of Artists, Birmingham (Dictionary of British Artists 1880–1940).

Incidentally, from at least Medieval times, according to Wikipedia, Vychan appears as a variant of the Welsh name Fychan. For a more recent example, see this link to the Welsh Dictionary of National Biography. https://bit.ly/2R6DndF

In 1874, J. L. Vychan exhibited two works at that year's Royal Academy exhibition, the first, catalogue No. 205, being "Showery Weather, Lake Geneva", and the second, No. 272, being "The Castle Crag of Drachenfels" (this discussion's painting?). His address was, as reported above, 29, Bolsover Street, Portland Place, London. He appears in no other year at the RA.

The same catalogue records that the landscape painter Alfred De Bylandt exhibited a painting (No. 153) entitled "The Ferry Market, Morning", from his address at 29, Bolsover Street, Fitzroy Square. The two address are, presumably, the same. Alfred Eduard Agenor de Bylandt was a Belgian painter who was born in Brussels in 1829. He spent some years travelling in Switzerland and Italy and died in 1890.

In 1877, The Art Journal records that Vychan exhibited "Bordeaux from La Bastide" at the Society of British Artists exhibition.

At the Yorkshire Fine Art & Industrial Exhibition, held at York in 1879, Vychan exhibited "Village Pilgrims, Crossing the Bridge at Lourdes, Pyrenees". His address was still at Bolsover Street.

In March 1880, at the Atkinson Art Gallery, Southport, he exhibited "the grand sweep of mountains around Lourdes, Pyrenees" and in July of that same year, at York, he exhibited "St. Sauvier, Pyrenees" (possibly the same work).

"The Artist" journal, of 1893, reported that he exhibited a piece called "Moving Tinber (sic)" in that year.

The Visual Arts Data Service (VADS) describes him as "German":

Here is the picture Marion mentioned above:

There is no Vychan listed in Artnet. He was evidently a painter of views, and his style recalls line engravings for travel books.

In 1874 29 Bolsover Street was the address of a framemakers called Thomas and Co; as Vychan is not otherwise traceable in London this raises the possiblities that either Vychan was merely using it as a postal address; or that Vychan was a pseudonym of Thomas.

With regards to the name, Marion was right in the post earlier. The name of Vychan is an old Welsh name.

The word ‘Bychan’ is used in Welsh to mean something small. When used in conversation the word quite often naturally mutates to be ‘Fychan’.

By the middle Welsh period V’s sometimes replaced F’s especially at the beginning of a word.
The name also continued to develop into the name Vaughan.

It’s a name more often used in the Welsh speaking community especially when replacing the surname of Vaughan. It’s not unusual to hear the name Fychan being used in an Eisteddfod as a competing name (as in the example above) or as a nom de plume.

Kenny Smith, would you have a list of Vychan's works that were exhibited at the Royal Society of British Artists, and the dates of their showing?

Thank you, Osmund. That is most kind and is deeply appreciated.

Regarding Thomas & Co, Bolsover Street. I am pretty sure Vychan (and others, inc Bylandt) were using this as an exhibiting address only, and perhaps with Thomas as an agent for enquiries and sales. It was a common practice, frame makers often also being sales-agents and dealers. In the late teens/ early 1820s W.J. Huggins initially used the frame maker Thomas Merle in Leadenhall Street this way, before setting up on his own further along, and Merle had also been agent for Thomas Luny,

The RBSA (Royal Birmingham Society of Artists) archive team did some digging and found L J Vychan of 29 Bolsover-street exhibited in an autumn exhibition of 1875. He is marked up as number 32 in the catalogue, for the work titled: From the Wood to the River-A Rhine Scene which is marked up for £20.

Vychan is also listed in the list of exhibitors for 1876 under the name F L Vychan. Perhaps a mistake or something pertaining to the name spelling differences. The work is titled The Isle of San Giorgio and is also priced at £20.

Title
Drachenfels on the Rhine, Germany