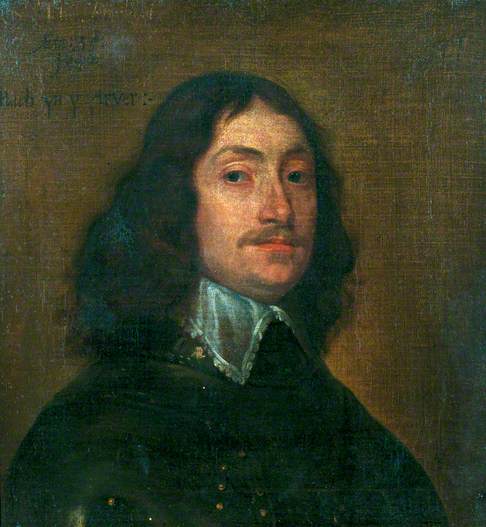 This portrait has signs of being by William Dobson. However, it does look weak in some areas and it is unlikely that Herbert was in Oxford until 1647.

The collection comment: 'The painting was formerly owned by Robert Williamson, who lent it to the 'National Exhibition of Works of Art' in Leeds, in 1868. Perhaps someone knows who Robert Williamson was?

The work formed part of the display of 'Yorkshire Worthies' there and was listed in the catalogue as by Robert Walker.'

Thank you to all for participating in this discussion.

This discussion is now closed. A conclusion was not reached.

If you have any new information, please propose a new discussion by following the Art Detective link on the artwork's Art UK page.

This looks to me like a provincial imitation of Dobson's style, rather than a work of Dobson himself.

Re the provenance, does the Leeds catalogue give the addresses of lenders in the back? This might help in tracing Mr Williamson. If this hasn't been checked I could look for a copy here in Leeds and make sure.

I think I may have been drunk when I submitted my initial observation. Anyway, agree with you Adam. I think it is important to confirm whether this is in fact a portrait of Herbert - the only other image I've seen is an engraving where he looks a little different. One might expect there to be a better portrait of Herbert on which the picture here was derived.

It looks like it has a common source with a late 18th cent engraving at the NPG, which was copied from a half length portrait of Herbert then owned by F Smyth of Newbuilding. Not sure where Newbuilding is, is it inns of the London inns of court?

Newbuildings (with an 's') is a West Sussex estate in Shipley held by the Caryll family from 1609 until 1752. They were Catholics and would have been Royalists at the time. I am unaware of any links between the family and Herbert. The present house dates from 1688.

Newbuilding was a location near Thirsk, north of the city of York.
F Smyth died there in early 1809.
In the preface to the 2005 reprint of Herbert's "Travels in Persia" the editor points out that the painting owned by F Smyth, was different to the portrait owned by Robert Williamson. The latter portrait, which had been loaned to the Leeds exhibition in 1868, was said to be painted on panel, whereas the above description states that it is on canvas.

My opinion is that whoever painted this portrait was a skilled artist (not a copyist). I think it suffers from poor cleaning or restoration (some time ago). What is the rather dim inscription top left? Why not Dobson?

The inscription appears to give the sitter's age as 35 (or possibly 33) followed by an indistinct date sometime in the 1640s. I have no Welsh to speak of and I'm certainly not familiar with 17th century Welsh spelling but I think the lower inscription may read 'paub yn y arver' which I'd take to be a truncated version of the adage 'pob gwlad yn ei harver' ('every country agreeable to its own custom') quoted in William Owen Pughe's 1803 dictionary http://bit.ly/1NzmVs1 It would seem an apt motto for a noted traveller but whether Herbert was known to use it I'm afraid I don't know and I'm more than ready to be proved incorrect.

As Herbert was born and died in York, it must be the Thirsk Newbuilding. Would Cliff kindly explain his observation about canvas vs panel again, as I did not understand it first time round? I think you are saying that the painting that was shown in Leeds in 1868, when it was owned by Robert Williamson, is oil on board. But the GAC painting under discussion here - which was also lent to the 1868 Leeds exhibition by Robert Williamson - is oil on canvas. So are there two paintings, or is the GAC provenance wrong, or have I simply misunderstood you?

But anyway, you made those points to support the 2005 editor's assertion that the painting owned by F Smyth of Newbuilding and the painting here are two different paintings. I also agree with you/ the editor. What I meant was that the print after Smyth's painting and the GAC painting shared a common source, not that the one was a print after the other. They are both versions of a further painting, in other words. As Tim Williams also suggested, once he had finished being drunk.

The motto "pawb y yn arver", is given in William Dugdale's "Visitation of Yorke" as the motto of the Herbert family of Middleton-Wherno. It also appears on the title page of the 1677 edition of Sir Thomas Herbert's "Some Yeares Travels into Africa & Asia":
http://www.britishmuseum.org/research/collection_online/collection_object_details.aspx?objectId=1648152&partId=1

I first came across it on this painting:
http://www.bbc.co.uk/arts/yourpaintings/paintings/portrait-of-a-gentleman-2719

I thought I'd seen the motto on a portrait before! Oliver, I submitted that portrait for discussion back in July because the sitter and artist has been conflated in the notes - Ludger Tom Ring being a likely candidate for the author.

It's your archetypal German school merchant portrait - and as fate would have it - Christopher Herbert (Sir Thomas's father) was indeed a merchant. It might not be him, but that's where I'd start. Good spot.

What sort of suit is he wearing? Or is it armour? Do I detect dots of shining rivets along the lower quarter of the portrait? If he is wearing armour, does that effect any of the above suggestions?

The BBC painting is from about 1560 and is more likely your baronet's grandfather (another Thomas, who was mayor of York 1604, I believe) or even great-grandfather. The coat of arms on the BBC painting has the Herbert family arms in the first quarter (though not the version recorded in Dugdale). Anyway, more support for the motto and identity of your sitter.

(And I am guessing the BBC painting is the great-grandfather, another Christopher, 'Christopher Herbert had been made a Freeman of the City in 1550 ... was a City Chamberlain in 1557, appointed Treasurer of the Merchant Adventurers in 1563 and was Governor of the Company from 1573 to 1575. He was Lord Mayor of York in 1573. He died in 1590 and was buried in St. Crux Church.' http://www.yorkconservationtrust.org/pavement-sirthomas.html. The coat of arms in the house would be the piece of evidence we'd need for that identification.)

Richard, to clarify the situation, here is the extract from the preface of "Travels in Persia". The preface to the 1928 edition was written by W.F. (Sir William Foster). On page xiii of the preface, W.F. refers to two engravings of Herbert, and states the following.
“In both cases the original painting was stated to be in the possession of F.Smyth, of Newbuilding. A different portrait, painted on panel in 1642 and ascribed to Robert Walker, was lent by Mr Robert Williamson to the Leeds Exhibition in 1868, and was reproduced in Edward Hailstone’s illustrated catalogue; judging from the photograph there given, the original was in a very bad condition.”

For information, Francis Smyth (1737-1809) F.S.A. lived at New-building in the village of Kirkby Knowle, near Thirsk, North Yorkshire.

Thank you. Foster was surely referring to the painting under discussion here, when he mentioned "a different portrait, painted on panel". He was wrong, anyway, as the painting is on canvas. Nor, as he had not seen F Smyth's portrait, was he in a good position to know that Robert Williamson's painting (which he had not seen either) was not a version of it.

Just to tick the box on Betty Elzea's question: yes, he is apparently in full upper body armour, most of the rivets being on the right pauldron.

Please note a new discussion has been started about the 'Portrait of a Gentleman' by British (English) School at Southend Museums Service (http://www.bbc.co.uk/arts/yourpaintings/paintings/portrait-of-a-gentleman-2719).

See Art Detective discussion 'Is this a portrait of merchant Christopher Herbert? Who is the artist?'
http://www.thepcf.org.uk/artdetective/discussions/discussions/is-this-a-portrait-of-merchant-christopher-herbert-who-is-the-artist

It would be very much appreciated if the contributors who have already posted comments about this painting could re-post them on the new dedicated discussion page. Many thanks.

Many thanks for all the ideas and very helpful contributions. I have added these to our file. May I suggest that we close this discussion for the time being? Many thanks