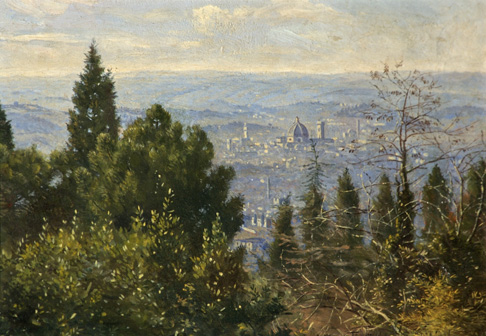 2. Note from the collection:
We don't know anything about this artist other than he met with Sir Merton Russell-Cotes (our founder) in June 1920 and gave him a painting (the other work we have by this artist). He seems to have been active in this part of the world as I have seen another, later, painting by this artist showing a scene in Bournemouth.

When our collection was reviewed for the NICE inventory this is what was said about this artist: 'The biography of Arthur de Tivoli is unknown. He may be a relation of the Florentine artist Serafino de Tivoli (1826–1890). However, none of this master's virtuosity is evident in the work of Arthur de Tivoli. The Russell-Cotes 'View of Florence' is taken from a high point, possibly in the environs of Fiesole, above the city to the north-east, a popular site from which to paint the city. Dark cypresses and leafless trees, indicating the view was taken in winter, dominate the foreground of the painting. The main monuments of the city, the cathedral dome and bell-tower and the tower of the Palazzo della Signoria, are identifiable at the centre of the canvas and beyond the city extends an expanse of rolling hills. The view is painted in pale tones suggestive of winter mist.'

The artist Arthur de Tivoli's birth and death dates are confirmed as: 1891–1961.

This amend will appear online in January 2016. Thank you to all for participating in this discussion. To those viewing this discussion for the first time, please see below for all comments that led to this conclusion.

Concerning his birth date: a record in the National Archive says Arthur Joseph W. was born on 3th October 1891, in Viareggio.
His father was Giuseppe De Tivoli and his mother Anne Bevan.
http://discovery.nationalarchives.gov.uk/SearchUI/Details?uri=C10374495

Arthur John William De Tivoli died in Bournemouth in 1961. On the 1911 census, he was an art student (aged 19, born at Viareggio, Italy) living at Boscombe, Hampshire with his mother Annie (Anne) - there is a note that his father was in India at the time.

There is a problem here as the 'View of Florence is apparenly dated 1893 and other painting by Arthur de Tivoli in the Russell-Cotes has on the reverse an inscription records that the painting was purchased from the artist by Sir Merton Russell-Cotes in June 1904. So this 'Arthur de Tivoli' could not have been born in 1891.

So, Andrea, if this the same Arthur de Tivoli how do we explain the dates of the paintings? Perhaps the Russell-Cotes could confirm the accuracy of these dates and inscriptions.

The museum should contact Paul Nicholls in Milan who is extremely knowledgeable about this period of Italian painting and is compiling extensive information on Italian 19th century artists and Britain. He can be contacted at secretraria@nicholls.it

In Italy of course he is Arturo de Tivoli

There remains the problem that the 'View of Florence is apparenly dated 1893 and other painting by Arthur de Tivoli in the Russell-Cotes (http://www.bbc.co.uk/arts/yourpaintings/paintings/girls-head-58705) has on the reverse an inscription recording that it was purchased from the artist in June 1904 This 'Girl's Head' is the work of a mature artist with a confident signature, unlike the drawing of 1914 illustrated at http://www.thepcf.org.uk/artdetective/media/_source/wp-20140808-10-46-59-pro.jpg.

So either the dates on the paintings are wrong or have been mis-transcribed, or this 'Arthur de Tivoli' could not have been the one born in 1891.

Could the collection have a look and check these dates?

Looking at the photograph of the drawing I see that next to the signiture are the words 'age 14'. If we take this at face value the person produced the 1906 drawing was born in 1892. I think we have a case here of two people with the same name.

Could the Russell-Cotes possibly send photos a) of the date on the 'View of Florence' and b) the inscription on th abck of the 'Girl's Head', both which might convince us that these are true dates and therefore that we continue to have a real problem here? Andrea Contio's drawing indeed looks likely to be the work of a talented 14 year old.

Hopefully it has attached this time. There is no date given on 'View of Florence'.

It is interesting that the Russell-Cotes say there is in fact no date of 1893 on the 'View of Florence'. In which case the erroneous date given on Your Paintings has been misleading us all along.

Andrea Conti's recent message says that Andrea Apostolo's very similar view of Florence dates "to a period between 1915 and 1935. Probably painted while he was a guest in Florence of a relative, a daughter of the painter Markò . Arturo subsequently returned to England, perhaps to escape racial persecution." If this correct then the Russell-Cotes painting is probably of the same period and was presumably bought back to the UK in or before 1921 and acquired by Sir Merton.

Should the execution date be amended or deleted?

I think we should have confirmation from the Russell-Cotes that they are happy for the 'date' of 1893 to be removed before it is deleted. Then we can say that it is probably about 1915-21.

The RCAGM is happy for the date of 1893 to be removed from this work on the Your Paintings website.

The execution date has now been removed.

I have a painting signed by an Arthur De Tivoli. It came from my grandmother's house in Branksome, Bournmouth. My mother told me that he lived with my grandmother in the latter part of his life, and that he painted for her in lieu of paying rent. I would need to check on the dates, as 1961(d) seems a bit early, but my mother is still living so could verify that.

Thank you, Chris. It would be very helpful if you could check details with your mother. She may be the only person who knows about this period of his life.

dear Chris, can you ask your mother if arthur had any children?

Hi I too have a framed picture signed Arthur De Tivoli. The view is similar to the " steamer at Brownsea" but from a different angle.
This came from my parents home but do not know where or when they got it.

The de Tivoli genealogy is hard to track, because much of it is divided between England and Italy. The family is Jewish - hence Andrea Conti's mention of Arthur returning to England in the 1930s to escape racial persecution. Arthur/Arturo's father Giuseppe is always recorded in England as Joseph (William) de Tivoli - he was born (1852) and died (1925) in London, but lived latterly in Tezpur, Assam, in the far north east corner of India. He was, as Andrea mentions, a railway engineer: after studying in Germany in the 1860s, he trained and worked on railways in Sardinia in the 1870s/80s, then moved to India at the end of the decade. Between 1898 & 1909, after separating from Arthur's mother Anne, he appears to have fathered at least five more sons in India, three of whom came "home" to England in the late 1920s. Two of them - Arthur's half-brothers, Thomas and Francis - settled permanently in the UK, married here and each left a daughter born late 1930s/early 40s. Both of the daughters later also married here, in the 1960s.

Joseph's uncle Cesare de Tivoli (1830-1914) was also in the Railway industry, and lived in London: he was naturalised a British subject in 1866, as his father Vitale had been five years earlier. The well-known artist Serafino de Tivoli (1826-1892) was another uncle (and thus Arthur's great uncle), and yet another uncle, Felice (alias Felix, c1826-1908) was also an artist and dealer. Both Serafino & Felice lived in London in the 1860s/70s, and Felice had three daughters who married in England at the end of the C19th - I haven't traced things further, but they quite probably had children who would have been Arthur's second cousins, and there may well be British descendants in these female lines.

Our subject, Arthur JW de Tivoli married Ethel M Hedger at Poole in 1930. However, there is no sign of a subsequent birth in England & Wales of anyone with the surname and the right mother's maiden name. Ethel de Tivoli died in 1958 (Poole 1958 Q1), which suggests the final period of Arthur's life when he lived with Chris Ferris's grandmother was 1958-61. Neither Ethel nor Arthur left UK wills, and it's looking unlikely that he had children: his closest relatives in the UK now would be the two daughters of his half-brothers, both of whom may well still be living. But even if they knew Arthur, I'm not sure what else of substance we could learn from them. It's not improbable, too, that there was ill-feeling between the different parts of the family; it looks as if Arthur and his mother were effectively abandoned - if so, they may have wanted nothing to do with Joseph's Indian family.

Thank you very much Osmund! I think you have definitively tied this one off. I shall keep this all on file for the future.