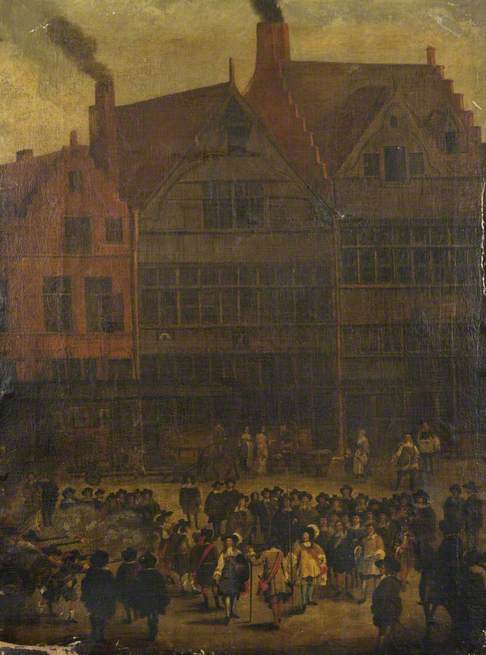 This work is entitled 'A Scene of Rebellion'. It appears to show people being executed in the middle of a busy street in a Flemish town. However, if you look at the general calmness of the scene, with housewives coming out of their homes to watch and a crowd of people standing behind the people being shot at, it is clear that this is not a violent scene. Rather, it depicts one of the parades of the local militia which included demonstrations of firearms using only powder. A similar scene can be found in Denys van Alsloot, 'The Ommeganck Procession in Brussels on 31 May 1615: The Senior Guilds' in the collection of the Victoria and Albert Museum. In the centre of that painting we also see demonstrations of firearms. https://bit.ly/2x7N4zl

Nicolaas van Eyck was himself a member of a local ‘schutterij’ (civil militia) and is known to have painted parades of local militia in his home town Antwerp. An example is in the Museum Vleeshuis, Antwerp. https://bit.ly/2xcAePE

Further evidence for this being a representation of a parade of a civil militia can be found in the (unfortunately poor quality b/w) reproduction of van Eyck's 'Grote Parade van de Antwerpse Burgerwacht op de Meir, 1673' (Grand Parade of the Antwerp Civil Guard on the Meir, 1673). https://bit.ly/2p4Oq9X On the far right of this canvas is depicted a row of militiamen shooting at a few men with their backs turned towards the shooters. The three houses depicted on the right-hand side are almost identical to the three houses depicted in the Hospitalfield painting. It is therefore likely that the Hospitalfield painting was originally part of a larger depiction of a parade of the Civil Guard on the Meir - the principal thoroughfare in Antwerp. This larger canvas appears to have been cut up and the Hospitalfield painting may be the sole extant portion of the original work (unless an art detective can locate other pieces of it ...).

The two large van Eyck's paintings in the Antwerp Fine Art Museum and the Museum Vleeshuis are clearly 'versions' of the same 1673 event: the general groupings, individual figures and poses, are practically the same, as well as the setting. This painting also clearly shows the same buildings on the right hand side, with slight differences of detail (e.g. lacking a rear chimney projecting above the centre of the roof on the right, and with a perspectivally odd left-side addition to the tall one at left). Irrespective of whether it is a cut-down fragment or not the title should perhaps be changed to something like 'A militia parade and musket demonstration on the Meir, Antwerp'. I have an imperfect memory that the technical Dutch term for this type of subject is a 'schutterstucke' (?), of which Rembrandt's 'Nightwatch' is the most famous, but someone can perhaps correct my spelling at least

Very interesting, as I was not familiar with the work in the collection of Hospitalfield House.

A high-quality image of Van Eyck's painting in our collection (Museum Vleeshuis) can be found here: https://dams.antwerpen.be/asset/llTZNRORdeXQuXenoCP7RRBa
(as a matter of fact there is only one version of this large work: the one mentioned on the KIK-IRPA website as being part of the Museum of Fine Arts is actually the painting from the Vleeshuis collection)
The Hospitalfield fragment isn't identical to the Vleeshuis painting, but they are clearly related.

Sorry about being misled into 'double vision' (and the hi-res image takes a prize for wonderful detail). The obvious question is what the relationship with the Hospitalfield picture is: it is apparently the same place -though with differences of building detail; also apparently a different though similar event; but is it also securely by van Eyck? That attribution may simply be because whoever made it knew of the Vleeshuis picture as a contemporary parallel.

Can we progress this: (a) by a more justifiable title such as that alreafy suggested: 'A militia parade and musket demonstration on the Meir, Antwerp', since we now know that is where and apparently what it shows; (b) by any further comment on artist. We know the larger Vleeshuis version is by van Eyck, but do Dutch specialists think this one is?

Good afternoon, firstly please accept apologies on behalf of Hospitalfield for the gap in correspondence regarding this very interesting thread. We look forward to contributing more regularly from this point.
It's fascinating to discover this new information regarding a painting within our collection about which we know relatively little. It has been held in store outside of any frame and has not been on display here as far as I can see tell.
Hospitalfield is an historic house of medieval origin which was established in 1890 as one of the early schools of art in Scotland. The predominant method of tuition at the time was by making copies of paintings by great artists, such as can be seen in the copy of a Frans Hals painting by an early 20th-century student at Hospitalfield -
Hospitalfield: https://artuk.org/discover/artworks/woman-in-a-ruff-128735/search/venue:hospitalfield-5896/page/10
Rijksmuseum: https://www.rijksmuseum.nl/en/search/objects?q=Sara+Wolphaerts+van+Diemen&p=1&ps=12&st=Objectsⅈ=1#/SK-A-1247,1
Initially, I wondered whether 'Scene of Rebellion' could have a similar derivation, ie a copy after van Eyck by a student, however on close inspection it is clearly a much older work and now I understand that any student would not have had access to such a painting as a resource to copy. Additionally, I can confirm that it was once part of a larger canvas as it has been adhered to a later substrate - happy to post detail pictures for reference.
We would be keen to explore this query further. The painting badly requires conservation cleaning however there are not any significant paint loss, so we would be confident that the painting would clean up well after conservation, which may be able to be undertaken next year.
Regarding the title of the work, I am unaware as to the origin of that title and I wouldn't like to make alterations until some further investigation, however it is fascinating to learn about the suggestion that this is a scene of parade of local militia rather than a rebellion - it does look rather civilised for a rebellion!
Thank you for your contributions and for highlighting this painting in the collections at Hospitalfield, we look forward to learning more.
Scott Byrne, General Manager, Hospitalfield

Thank you for that comprehensive response: perhaps you could have a direct discussion with the Museum Vleeshuis in thefirst instance and see if they, or Dutch contacts through them, could help get any further on being sure about who this is by and help refine a more suitable title. I'm sure everyone would encourage a conservation project too: the before and after appearance may prove fairly dramatic. As regards your good copy of the Dutch lady in the Rijksmuseum, even though the copyist is now unknown the record (inc. on Art UK) would be improved by saying 'after Frans Hals'.

Thank you all for your comments. As I posted this discussion quite a while ago, I was not aware that it had become active. The present title of this work seems to fit the action depicted: a line of men being executed on a busy street. However, the fact that there are people standing behind the persons being executed and other elements of the scene are quite absurd for a genuine execution. So it appears more likely to be a 'schutterstuk' or 'schuttersstuk' such as the Nightwatch of Rembrandt as indicated by Mr. Pieter van der Merwe. The more so since this fairly unknown artist who was quite respected in his time is known to have painted similar schutterstukken (like the one in the Vleeshuis). It would be great if the results of any discussions between Mr. Scott Byrne and Timothy De Paepe or other experts regarding this work could also be posted on these pages. Many thanks.

It now seems clear that Dick Groman's identification was correct and that this painting can be described as a fragment of a larger painting of 'Great Parade of the Antwerp Civic Guard on the Meir at the Huidevettersstraat', probably after, or by a follower of, Nikolaas van Eyck. It relates to and is of the same scale as the painting of the subject by van Eyck of 1673 in the Museum Vleeshuis, Antwerp.

I concur with Andrew Greg's posting of 10/04/2019 and recommend that the painted fragment could be titled 'Great parade and musket demonstration of the Antwerp Civic Guard' probably after or by a follower of Nikolaas van Eyck.

Title
A Scene of Rebellion