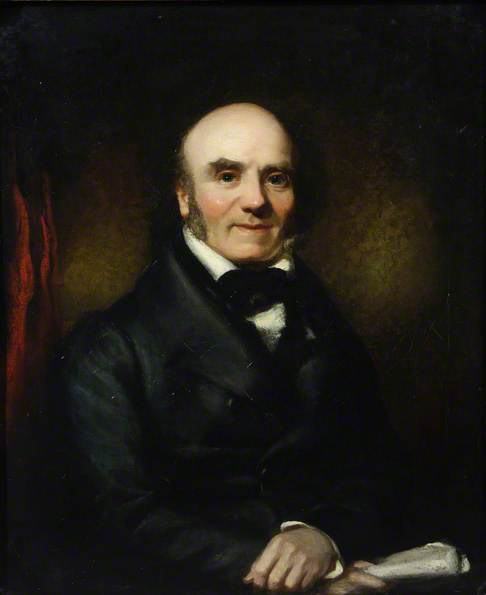 The identity of Heinrich/Henry Schmidt II has come into the discussion on the portrait of William Clift's wife, ‘Caroline Clift (1775–1849)’, at The Royal College of Surgeons of England.
https://bit.ly/2LyPWtM

What information can be found about this artist? And should the painter of the portrait of William be listed as Heinrich or amended to Henry Schmidt?

The sitter, William Clift (1775–1849), was Conservator of the Hunterian Museum at the Royal College of Surgeons from its opening in 1799 until his retirement in 1842. He was elected a Fellow of the Royal Society in 1823.

This discussion is now closed. Art UK has amended the artist’s name to Henry Schmidt (active 1830s). The portrait has been dated 1833, as inscribed on the back of the painting and recorded in catalogue entry 358 of the 3rd Exhibition of National Portraits, 1868, held in the South Kensington Museum.

I'll, start the ball rolling by adding a comment I made on the Caroline Clift portrait.

A Henry Schmidt of London is recorded exhibiting 'Italian Peasants' at the British Institution in 1834, cat. 434. So there was indeed an artist of that name working in London in the 1830s. Osmund Bullock promised some new research on Schmidt and I am sure he will spot this new discussion soon.

I did and I have, Andrew! But I'm at the Nat. Archives today and tomorrow on another project. Even when I get to it there's much collating work to be done, and be warned that I haven't reached a clear conclusion. Thanks, Barbara, though, for getting new thread going.

In the catalogue for the third Exhibition of National Portraits, held in the South Kensington Museum in 1868, this portrait of William Clift FRS was No. 358, with Henry (not Heinrich) Schmidt given as the artist, and the entry states "dated at back 1833." The catalogue is here (scroll down past the catalogues for the first and second exhibitions of 1866 and 1867, respectively):

The date of "c.1820–1829" currently given in the ArtUK information for this picture should be corrected.

Andrew Shore has contacted Art Detective asking whether the various listings of Henry Smith on Art UK are of potential interest to this discussion. He adds that if Heinrich was anglicised, might not Schmidt have been as well?
https://bit.ly/2Q8pue2
https://bit.ly/2CjCzxW
https://bit.ly/2wOl438

The third link is to a portrait of a surgeon, William Dalrymple (1772–1847), who probably knew William Clift, as they were a similar age, and might have been in and around the Royal College of Surgeons at the same time.

The portrait of Dalrymple could well be by the same artist who painted Clift, based on both the sitter (as Marion notes) and the technique or style, which is relatively crude (compare especially the hands in both pictures). I tend to think the pictures in the first two links are probably not by the painter of the Clift portrait (and obviously, Henry Smith is an exceedingly common name, so there could easily be different painters with that name).

At least one of these "Henry Smith"s is probably the Leeds-born, Italian-trained painter who died in Brunswick Square , London in 1864, aged 60.

With thanks to Andrew Shore, these images are also listed on Art UK as by 'H. Smith' (apparently different Smiths): one is a portrait of Sir George Strickland (1782–1874); the other has a Royal College of Surgeons/Royal Society connection, as it is Henry Jenner, Edward Jenner’s nephew.
https://bit.ly/2wNFiL9
https://bit.ly/2PJKIh8

Again, based on the sitter and the relatively crude technique (especially evident in the hands), the portrait of Jenner might be by the man who painted Clift. Henry Jenner died in 1851 at the age of 83, so his portrait was presumably painted ca. 1840s.

Both the NPG & BM identify this Henry Smith as the Leeds artist - on what grounds I don't know. The BM associate it with another (unillustrated) print after Henry 'Yorkshire' Smith, and published by him at Leeds in 1843: https://bit.ly/2MRC7Mg . The NPG, however, fail to make the connection with another print they have by 'Yorkshire' Smith of Charles Chadwick, Physician to the Leeds Royal Infirmary: https://bit.ly/2M4DfqO

If they are right about the identity of Jenner's portraitist, then he cannot be our artist, for Henry 'Yorkshire' Smith was never called 'Schmidt'. He was born at Leeds on 24th Nov 1805, and baptized with that name (by which he was also apparently known in Italy) on Christmas Day at St Peter's Church. He died, incidentally (in 1864) not at Brunswick Square, London, but at Brunswick Street, Leeds.

It seems likely, certainly plausible, that the Leeds Henry Smith painted this portrait of James Holdforth, who was the Mayor of Leeds in 1838:

The date given for this picture, 1884, must be incorrect, since by then the sitter (if alive) would have been quite old and the clothing does not look like 1880s dress but rather earlier.

The portrait of Henry Jenner cannot be "late 19th century" as implied in the ArtUK entry because Jenner died in 1851, and the clothing is definitely not late Victorian. Part of the problem, I expect, is that at least some of the pictures on ArtUK listed as by Henry Smith or H. Smith are not accurately attributed to the specific Smith who actually painted them.

Henry Smith (or Henry Smith Smith, as Graves calls him) exhibited at the British Institution in 1829 from an addres in Brunswick Square. After a gap (when he may have been abroad) he shows at the BI again from 1837-1839. The biography Oliver provides gives full details of what must be the same Henry Smith (1804-1864), a Leeds-born, Royal Academy Schools trained artist who travelled to Italy where he was known as "Yorkshire Smith". On returning to England, he worked in London and the provinces. But, as Osmund noted, this artist cannot be our artist.

Unfortunately, although the dating is right, the Royal Society's picture is (according to their website) signed: H. Schmidt (not Smith). Jacinto told us that in the 3rd National Portraits exhibition of 1868, the artist of the portrait under discussion is called Henry Schmidt and the work was dated (written on the back of the painting) 1833 (according to the catalogue, which is a reliable source, see attached). These are the facts, so however many Henry Smiths there may be out there, all mixed up on Art UK, the picture we are concerned with is recorded as being by Henry Schmidt and dating from 1833. What seems clear due to the dating and spelling of the name is that this is most likely to be the same artist who exhibited at the BI in 1834 with the Italian genre scene Andrew Greg mentioned at the outset of the discusison. More than that we do not have. As I suggested in the discussion about the portrait of Clift's wife (4 December 2017), there is much manuscript material about Clift, including a diary for 1833, readily available if the collection wishes to pursue the matter of who Schmidt was and why Clift selected him to paint his portrait.

I suggest we conclude this discussion with a correction of the artist's name for its listing on Art UK. It should be Henry Schmidt (fl. 1830s) and the portrait dated 1833.

Just a postscript on Henry Smith Smith. He exhibited at the Royal Academy from 1828 to 1839, then there is a gap until 1844 and that is the last year he appears. This information does not affect the closure of this discussion based on my earlier comments about *our* Henry Schmidt.

Please see 5 August for further comments.
I suggest we conclude this discussion with a correction of the artist's name for its listing on Art UK. It should be Henry Schmidt (fl. 1830s) and the portrait dated 1833.

Description
Half-length portrait of William Clift, seated, his body turned to the right as viewed. His hands are crossed at the wrist, the right hand holding a sheaf of paper. Clift is balding, with long side whiskers. He wears a black coat, waistcoat and tie, with a high-collared white shirt.