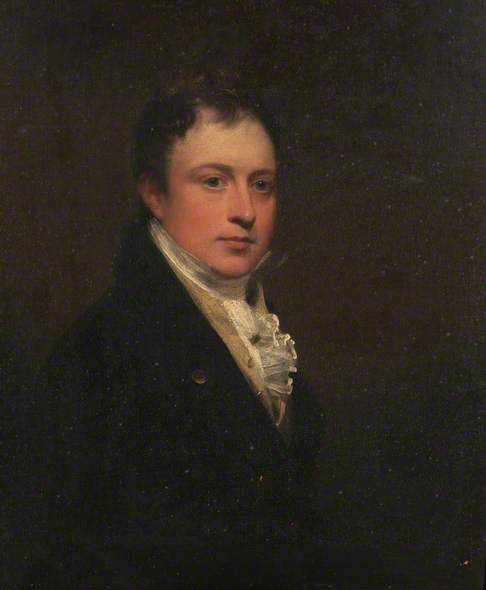 This portrait is one of a number depicting Pembrokeshire gentry and notables which used to be displayed in Haverfordwest Town Hall until it closed. There is no visible artist's signature, although it might be hidden by the frame. All I know is that it is a portrait of Sir John Owen of Landshipping.

If anyone has any ideas or perhaps further information about this portrait, please enter it into this discussion.

Is the sitter's birthdate known?

I think that he must be the Baronet of Orielton and MP from 1809 until his death in 1861. A lawyer and coal owner , his original name was Lord. Born 1776 in Pembroke , he took his mother's surname 23 August 1809 , shortly before his election as a MP on 13 September. 1809 could well be the date of this portrait. There is a long entry on him on The History of Parliament on.line. He was an Orange or Tory politician

He became a Liberal in 1859. Two portraitsof his wife Charlotte, Lady Owen, were with Roy Precious Fine Art - they are not by the same artist [www.royprecious.co.uk]
Owen inherited Landshipping on the river Cleddau and its estate from his cousin, Sir Hugh Owen in 1809

This certainly looks like the work of William Beechey, whose portrait of (Charlotte) Lady Owen was exhibited at the Royal Academy in 1816 (no.129). William Roberts ('Sir William Beechey, R.A.', 1907, p.135) records that Beechey painted a three-quarters portrait of Sir John Owen in 1821, which was not exhibited. The Pembrokeshire collection's portrait is painted on a canvas measuring 30 by 25 inches, a standard size, which was known somewhat misleadingly as 'three-quarters'. Roberts's reference could thus be to the work under discussion -- if we accept that the sitter, born in 1776, is aged 44 or 45.

Neale visits Orielton where he is shown about the house by Sir John an observes the painting of Lady Owen by Beechey.

Thank you for your suggestion Richard. I am myself not an expert on portraits, but looking at other Beechey portraits, there are some consistencies with composition and tone. I'm not certain the portrait is bright enough to be by Thomas Lawrence who painted Lady Charlotte Owen.

Message for Mr Richard Green - I accidentally hit the report button on your comment, my sincere apologies.

He looks rather young to be in his mid forties, at least to me, though I suppose it is not out of the question.

This could certainly be by Beechey. Many similar male portraits by him are on ArtUK.

I agree, at least in terms of an attribution: the deftly transparent handling of the cravat is 'Beechey on a good day' (cf his earlier portrait of Paul Sandby: https://artuk.org/discover/artworks/paul-sandby-17311809-148502/search/keyword:william-beechey/page/2) rather than Owen, allowing they both had less good ones. The fact there is a record of an 1821 'three-quarters' (ie 30 x25) by him is also circumstantially corroborative: it has to be either somewhere or nowhere any longer, and this one isn't far from where it was probably delivered. I don't see why the sitter can't be a young-looking 44/45 either and the round-collared coat (unlike that in the Sandby of the 1790s) also fits with c. 1820, albeit it had a long run too.

I rather agree, Pieter. And note that although our sitter's face is youthful, his hairline is significantly receded, and above it he's going very thin on top.

To cover the possibility that this might be an eighteenth-century portrait, we've now linked this discussion to the Portraits: British 18th C group.

Roberts's mention of the portrait of Sir John Owen (on p.135) would seem to be based on his reading of an entry in Beechey's account books, as transcribed on p.252: 'June 1. [1821] Of Sir J. Owen 26 5 0 [pounds and shillings]'. This sum equates to 25 guineas, half the price Beechey charged for a standard 'three-quarters' portrait -- and he usually took payment in two instalments. Receipt of the other half of the payment does not appear in the accounts around that time, although Beechey took payment on 13 July 1822 'Of Sir J. Owen, for frames, packing-case, &c. 34 8 4 [pounds, shillings and pence]', as transcribed on p.254.

For the portrait of Lady Owen (RA 1816) Beechey had taken a half-payment of 25 guineas in July 1815 and a further payment of 50 guineas on 16 July 1816. Roberts's reading of this on p.135 is that a 'three-quarters' portrait was originally envisaged, implying that the final outcome was something bigger.

Given Owen's documented involvement with Beechey over a period of seven years, it is highly unlikely that the portrait under discussion could be by any other artist. I agree with Pieter and Osmund that an age of 44 or 45 for the sitter is entirely possible.

This picture qualifies as a good Beechey, but I do not think it is good enough to be by Lawrence, nor does it have that kind of flair.

If we look at Beechey's Own self- portrait (admittedly earlier 1793):
https://artuk.org/discover/artworks/self-portrait-148503/search/keyword:william-beechey/page/4

We ca see that the canvas is a similar size and the pose identical, even the way the torso fades away at the bottom of the canvas. John Owen's dandy coat and cream waistcoat is safely nearer 1820, and I quite agree he is feasibly 45 years old.

Richard, I at first took it that the second payment of £34-8s-4d included (though it's not mentioned) the second 25 guinea payment for the painting itself. If my pre-decimal maths is right, that would still have allowed £11-17s-8d for framing & packing, etc, which I think would be adequate. But then I noticed it was for "frames" in the plural, and that seems too cheap - it set me wondering what else these entries could represent, bearing in mind that they are from an account book that only incidentally gives us information on sitters (and not in a consistent form). All that seems certain is that when he writes "Of xxxx...", that represents a payment made by that person; further detail of what the payment is for is often, but not always given.

On reflection I think that Roberts was wrong to conclude that Lady Owen's portrait must have been increased in size and price, effectively to 75 guineas (£78-15s) in toto - not least because I don't think 75 guineas was a price Beechey charged for any size portrait at the time. This is not quite certain, as there was clearly some variability in his charges, some 'specials', and some prices may include framing - but between Sept 1810 & Dec 1818 it seems to have been usually 50 gns for a three-quarter[s] (which is a canvas size), 100 gns for a "half-length" (what we would call 3/4 length), 120 gns for a bishop's half-length (slightly enlarged h/l) and 200 gns for a normal whole-length. See https://bit.ly/2rf0ozd for info on standard British canvas sizes.

This makes the next payment by Sir John on 1 June 1821 ("Of Sir J. Owen...£26-5-0") the final payment for his own portrait (at the correct old price) - either because it was for some reason left uncompleted previously, or simply because they were slow payers. This is not as unusual as it sounds, the accounts show - one payment shown had been owing for 25 years! The final payment exactly six weeks later on 13 July ("Of Sir J. Owen, for frames, packing-case, & c...£34-8-4") must have been for frames for both portraits, crating them up, and very possibly transport charges to Wales. My guess is that the paintings had been finished and sent previously (hers, anyway), but that the two final payments had been sums long outstanding - we shall probably never know the truth of it.

For those wanting to see the entries for themselves, go here https://bit.ly/2jrGrkr and then to the next three 'Owen' results marked.

Its not surprising Owen was a slow payer, as from 1810 onwards he vastly rebuilt his main house at Orielton and built a new villa at Landshipping, before entering ruinously expensive election campaigns.

Unless anyone seriously thinks there's a case for a conclusion other than at least 'attributed to Sir William Beechey' does this need to go any further? There's already enough circumstantial documentation here to back the stylistic opinions in cataloguing terms.

Owen's first wife (with whom he eloped to Gretna to marry in 1800) was Charlotte Phillips and she died in 1829: his second was Mary Frances Stephenson, m. 1830. There seems to be a very colourful seated portrait of Charlotte in black attributed to Lawrence (though where and on what authority is unclear from the web image) but is the Beechey known?

Thanks, Osmund, I agree with your unpicking of Roberts's reading and your re-interpretation of the account book evidence. I too thought at first that the payment received on 13 July 1822 might include part 2 of the cost of Sir John's portrait but, if so, it surely would have been specifically itemised -- and preceding the frames and packing-case etc. It is also more likely that the husband and wife portraits would have been of the same format, i.e. both 'three-quarters' or 30 x 25 inches, a possibility which Roberts's reading would seem to deny. I also agree that all this leads to a dating of c.1816 rather than 1821 for Sir John's portrait.

And c.1816 would give an age of around 40 for the sitter, which is probably more acceptable.

However, it is noteworthy that Neale's text of 1820 mentions only Beechey's portrait of Lady Owen. This combined with payment received by the artist for a packing case on 13 July 1822 suggests that Beechey's portrait of Sir John was probably not delivered until 1822. There are thus three possibilities:
1. Sir John' portrait was painted entirely in c.1816 but not delivered until 1822 following receipt of payment part 2 by Beechey on 1 June 1821.
2. The portrait was started in c.1816 but not finished until c.1821, when payment part 2 was received, and delivered in 1822.
3. Although Beechey received a down payment of half the price on 16 July 1816 he did not actually paint the portrait until c.1821, when he received payment part 2, and the work was delivered in 1822.

Richard, I'm glad you have flagged up that Neale did not observe Sir John's Portrait on his visit to Orielton around 1820, this had been niggling at the back of my mind. If the pair of portraits were closer in date I'm sure Neale would have seen both displayed in the house.

Pietre, I have not yet seen the corresponding portrait of Lady Charlotte attributed to Beechey. It is possible it is gathering dust in a Museum store room or is in a private house here in West Wales, possibly Pembrokeshire or Carmarthenshire. Sir John lived out his last days almost bankrupt renting Taynton House, Taynton Gloucestershire. I am not certain of the likelihood he would have brought his first wife's portrait with him into his home with his second wife? I will make some enquiries here in Wales.

Another important portrait currently languishing out of public view in the care of Pembrokeshire County Council is the that of General Sir Thomas Picton that used to hang in the Shire Hall, Haverfordwest. The link on William Beechey on pages 120/121 talks about several paintings of him by Shee as well as Beechey. Is it known definitely which one the Haverfordwest Shire Hall is? There is of course, the Carmarthen court house portrait of Picton.

When the Heinz Archive and Library reopens at the NPG, I hope to research the portrait which is the subject of this discussion.

Description
The sitter was Lord Lieutenant and Vice Admiral of the County of Pembroke. He lived at Landshipping House on the River Cleddau.