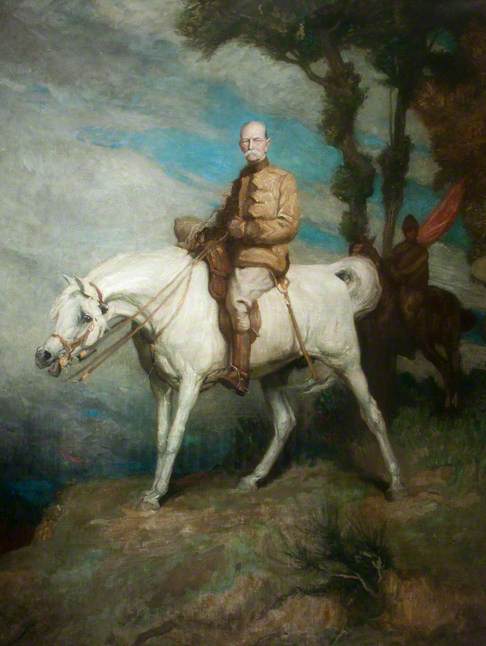 My interest relates to Belfast City Hall, where I am a councillor. We have one large painting on display but we don't know the painter or the subject. It looks to me to be Boer War related, or of that era. Any suggestions would be most welcome.

This painting is now listed as after Charles Wellington Furse (1868–1904), and the title has been changed to:

Your painting is after the portrait of FM Frederick Lord Roberts on 'Vonolel', by Charles Wellington Furse. The artist executed numerous portraits of the Field Marshal, probably because his brother had once been his ADC (as noted in the Tate entry), and there is a version of this equestrian portrait in the collection of the National Army Museum also.
see> http://www.tate.org.uk/art/artworks/furse-field-marshal-earl-roberts-on-his-charger-vonolel-t00615

In the book, Illustrated Memoir of Charles Wellington Furse, A.R.A. (London, Burlington Fine Arts Club, 1908), it states (p. 6):
"In his studio he embarked upon his most ambitious monumental portrait, the 'Lord Roberts.' Many studies were made; the composition was set out on canvas eleven feet by fifteen; the equestrian figure of Lord Roberts was completed, and some of the figures behind him, orderlies and Sikhs. The troops to the right and the background were only sketched in at the time of Furse's departure for South Africa in 1895; the canvas was then rolled up, and, in the pressure of other work, never touched again, for the picture was not a commission. It was complete, however, in essentials, and is to be seen at the Tate Gallery. A picture on a smaller scale, and different in arrangement, was finished and exhibited at the RA in 1894, and a study for this was completed as a picture later."

I totally agree as to both artist and sitter. I wonder how it came to Belfast? It would be interesting to know where this picture fits in with the various versions mentioned.
Betty Elzea
Retired art historian

Yes, it's definitely Furse, Roberts and Vonolel. There are also some excellent studies by Furse, relating to his South African trip, in the British Museum: http://www.britishmuseum.org/research/collection_online/search.aspx?searchText=charles+furse

The best account of this period in the artist's regrettably short career is the illustrated memoir mentioned by Peter Harrington; otherwise more work needs to be done on Furse's SA trip. A good comparison would be Harry Bates's sculptural portrait of Roberts, discussed in a recent essay by Jason Edwards: 'Harry Bates's Lord Roberts memorial in London, Calcutta, and Glasgow' in Julie Codell's 'Transculturation in British Art, 1770–1930' (2012)

There seems no doubt that this is indeed "Field Marshall Frederick Lord Roberts on 'Vonolel'", a version by (or perhaps after) Charles Wellington Furse. I am sure Jenny would support this official recommendation to the collection.

I do indeed support the official recommendation to the collection, and suggest that the painting is titled 'Field Marshal Frederick Sleigh Roberts, 1st Earl Roberts VC on "Vonolel"', c1895 [he was promoted field marshal on 25 May 1895].
But I have reservations about confirming it as a version by Furse, especially when compared to the Tate and NAM paintings, which are very similar to one another (although neither are the 11 x 15 feet mentioned in the memoir quoted above). The Belfast painting has substantial differences to these, especially with regard to Roberts's features. It would be safer to say that it is after Charles Wellington Furse, subject to further evidence or information as to its provenance.

Description
Frederick Sleigh Roberts (1831–1914) was born in Cawnpore, India in 1832. His family were originally from Co. Waterford and he became one of the most successful commanders of the nineteenth century. Roberts served in India before leading the British forces to success in the Second Boer War. The fact the horse is painted with its four legs down signifies the Field Marshall died of natural causes, rather than in battle.