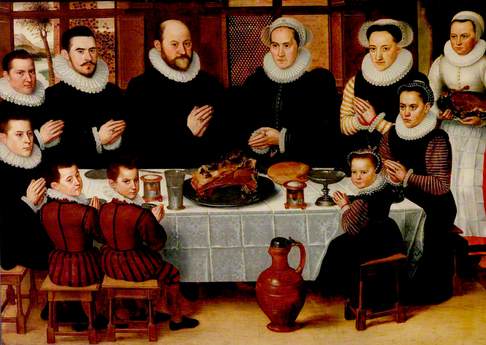 There has been a suggestion that this work may not be by Antoon Claeissens (c.1536–1613). The original attribution appears to have been by Dirk de Vos in the late 1980s.

This discussion is now closed. The attribution to Anthuenis Claeissens (c.1536–1613) remains as it is. Additional information about the provenance and suggestions for further research have been provided for the collection by Xanthe Brooke.

This is a matter for a specialist, which I am certainly not, but in group pictures by Claeissens available online, the figures appear less plain and more stylized, even mannerist. Of course, the subject here hardly calls for a mannerist treatment, so that may explain a plainer style.

Dirk de Vos is a leading Belgian art historian and the former curator of Groenigemuseum in Bruges, which holds several paintings by Antoon Claeissens, who lived and worked in the city. De Vos specialises in medieval and early Renaissance Netherlandish painting and has published widely on the subject. His proposal that this painting should be ‘attributed to Antoon Claeissens’ has been accepted by the RKD and is on its website. So unless there is a specific reason and a suggested artist there would seem to be no particular reason to re-attribute the painting. However, researching the provenance further has revealed another member of the Claeissens family workshop who might provide an alternative attribution.

The Liverpool-born Henry Yates Thompson (1838-1928) is best known as the leading British collector of illuminated manuscripts of the medieval and early Renaissance period, 10 of which he had inherited from his maternal grandfather the Liverpool antiquary Joseph Brooks Yates (1780-1855). He also bought Old Master and 19th-century paintings to adorn his houses at Bryanston and Portman Square in London, and between 1898 and 1921 he published catalogues of his collection, the latter illustrated at Plate XVIII with the SBT’s painting entitled A Flemish Family at the Mid-Day Meal (see attached). Henry Doyle (1827-1892), a former Director of Dublin’s National Gallery of Ireland, attributed it to Pieter Pourbus (active in Bruges 1543-84), and Antoon Claeissens master, but by 1921 Henry Yates Thompson, formerly supportive of the Pourbus attribution, believed it was by the Antwerp-based [Chrispijn] van den Broeck (1523-c.1591).

However, the entry for the SBT painting on page 22 of a manuscript version of HYT’s catalogue begun on 26 May 1885 (and in a London private collection, whose owner I would like to thank for this information) shows that HYT had also noticed a similarity between his painting and an ‘allegorical painting with portraits called "La Convention de Tournay" by Pierre Claeis or Claeissens, in the [Groeningen] Bruges Museum. Both Antoon’s father and brother were artists called Pierre/Pieter, the father’s dates (1500–1576) and the brother was active in Bruges between 1570 and 1612 according to the RKD website. It might, therefore be possible that the SBT’s painting could be re-attributed to Pieter Claeissens the younger, except that the latest publication on Pourbus’s followers including the Claeissens, the exhibition catalogue by Anne van Oosterwijk Pieter Pourbus en de vergeten meesters/ and the forgotten masters (2017) https://web.archive.org/web/20180914165621/https:/www.visitbruges.be/persdossier--pieter-pourbus-en-de-vergeten-meesters. warns that despite infrared reflectography having been successfully used on 2 of Pieter the elder’s paintings to reveal underdrawing, it is still difficult to differentiate the varying hands of the Claeissens family workshop. An earlier attempt to do so by W.H James Weale was published in an article in The Burlington Magazine in 1911 vol. 19, pp 198-204.

The provenance to a ‘French nobleman in Amboise’, which was supplied by the antique furniture dealer Henry Samuel of 448 Oxford Street (fl.1881 – 1913), from whom HYT bought the painting, might also merit further research, though HYT noted in his manuscript catalogue that although Samuel had “a number of books which seem to give a certain likelihood to this view. But his French nobleman appears on the scene rather too frequently for complete credit to attach to him.”

I would, therefore, recommend that either the attribution should remain Antoon Claeissens or be expanded to include Pieter II, until further technical research is done to disentangle the hands of the Claeissens studio.

Xanthe, the collection would like to keep the current attribution, but would like to thank you for considering this question. They will add this very helpful additional information to their catalogue.

Title
A Family Saying Grace before a Meal

Description
This painting shows a family group seated around a table that is laid for a meal. The family are at prayer, and sit around a long refectory table draped with a damask tablecloth. This painting is an early example of the Christian family portrait, a very frequent theme in the painting of the Low Countries in this period. It is thought that the family was probably Catholic because the Imperial Habsburg escutcheon is woven into the damask tablecloth. This picture is rich in biblical symbolism, derived from Psalms 1 and 128. In the background to the left of the painting, the view through the open window shows a tree by a river (symbolic of a good family man) and a vine growing against a wall (symbolic of the fertile housewife).