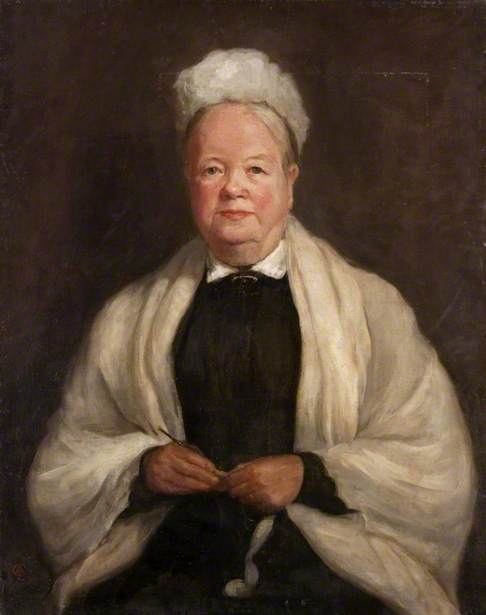 Could this be by the artist Emma (Jones) Soyer? She painted a portrait entitled 'the Centenarian Scotch Knitter' who I think may be Elizabeth Love as this is the title of a work that was exhibited at the Royal Academy in 1836 (no. 969) under her maiden name of Jones https://bit.ly/3szMXJT In the memoirs of her husband Alexis Soyer there is a mention of a painting that Emma did of this woman after an article in the papers about a Scottish woman reaching the age of 107. The woman would not stop knitting while Emma painted. It also says it was exhibited at the Louvre. [Art Detective Group leader: Ruth Brimacombe]

Alistair Brown, Art UK added: ‘Has the monogram on the left (CAL) been identified?’

The Collection has commented: ‘Artworks have temp numbers for all kinds of reasons, often because we are unsure about ownership and how they came into the collection. It would be great to find out who 'CAL' is. We certainly think that the woman in the painting looks to be in her 60s rather than over 100 years old.'

Dr Marion Richards, Art Detective Manager, Art UK added: ’Gabriella, thank you for prompting research on this painting. I agree with the Collection that this particular knitter looks to be in her 60s rather than over 100. It's such a lovely portrait and it would be great to find out more about it if we can.’

I would say that this is crochet, rather than knitting? I can just see one needle and it looks small, like a crochet hook.

Just to say that this woman isn't knitting. She has only one tool and she holds it in her right hand as one would using a crochet hook, which is a single tool. Knitting requires at least two needles. Her left hand holds the newly-made fabric as one would with crochet, as it helps if the left hand provides some tension while the other hand works the hook. The fabric is not held this way in knitting.

The sitter is not a centenarian, and this does not look like an 1836 portrait. I expect it is later.

Yes, it is around the time of the Glasgow School c. 1880+. The monogram reads something like ALC. I have not yet tracked down the artist.

Alexander Christie A.R.S.A. (1807–1860)? My composite is based on the work ‘Oliver Cromwell Imprisoning King Charles I’. The Invaluable website (https://tinyurl.com/f4vvcjj7 ) states that it was signed with a monogram, although I cannot see it. I used the image from the Sotheby’s website in my composite. https://tinyurl.com/yvh2ahf9

I doubt it, Marcie. Christie has more of an illustrator's style, and our picture looks later than 1860.

The clothes in this portrait could have been worn for the later stages of mourning, my guess is in the mid to late 1860s - including a possible mourning brooch- though the bonnet/cap of white ruffles is a bit of a problem as is the white shawl. The central hair parting is very much of this period.
OR could it be a type of nurse's uniform, a senior Ward Sister maybe? - again in the c late 1860s....
OR could it be a type of plain religious dress, thought is not Quaker…

The attached detail from Art UK's image may be slightly clearer than the download available from the website.

The white cap seems to be similar to the one in this c. 1899 photograph of Queen Victoria. https://tinyurl.com/uc8uenw2

There was an artist named Charles Lyons Aitken in Glasgow in 1909 but I have not found names or images of any of his works on the internet. In 1893 he was an upholsterer. The Hayes/Aiken family tree on Ancestry shows a Charles Lyons Aiken (June 14, 1867, Marcross, Inverness – Q1 1938, Dartford, Kent). He was not the Charles Aitken who was a Director of the Tate.

It doesn't look like she's knitting to me. The way her hands are held she's crocheting or tatting. Check out images of "hands knitting" and "hands crocheting" on Google and you'll see the difference. The fibre below her hands doesn't even look spun - so I don't know what's going on.

Just to recap, the original question suggested both a possible artist (Emma (Jones) Soyer), a possible date (1836) and a possible sitter 'Centenarian Scotch Knitter' - a nice suggestion, but one that can be easily discounted as the style of the painting and dress signal the work was painted later in the 1880s or 1890s.

Further research into portraitists who used the monogram CAL or ALC could prove fruitful.

As for the sitter - her occupation and apparel seem key to zeroing in on her identity. She does appear to be crocheting (not knitting) and the familiar homeliness of this activity, and her personality, is being showcased. She is not wearing a widow's cap (these were usually peaked and were always worn with long streamers). Equally, it doesn't seem in keeping with the fashionable lace cap typically worn by Victorian women as they got older. However, it does look more like the kind of cap worn by maids, which makes me wonder if we are perhaps looking at the affectionate record of a household retainer?

The softness of the cap might even suggest sheepskin, and she is wearing a wedding ring.

Sorry - I have now checked my latest monogram manuscript and I cannot find the artist in it. I do have a lot of Cs and some close misses, but no hits.

Title
Portrait of a Seated Woman

Medium and Support
oil on canvas on board