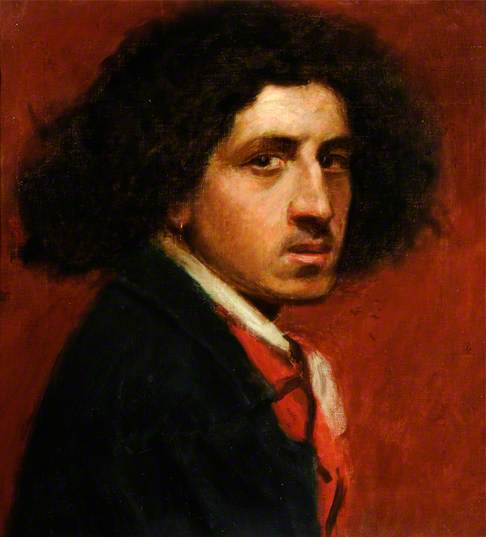 [The Collection has noted that an Art Detective submission has suggested that the sitter is the Italian model Antonio Corsi (1868-1924), and have acknowledged the Graves attribution, as it being a portrait by Rossetti, is doubtful]. The painting is presently attributed to Dante Gabriel Rossetti, although stylistically not very like his work. Corsi would have been 14 years old when Rossetti died in 1882, so this makes the attribution unlikely. Corsi modelled for many great artists in London, Paris and the USA, including Sargent, Cot, Leighton, Millais, Alma-Tadema and Burne-Jones.

The mystery painting was a gift by J.G Graves in 1929 as was this painting by Mancini in the same collection.
https://artuk.org/discover/artworks/portrait-of-a-man-72001/search/keyword:museums-sheffield/sort_by/date_earliest/order/asc/page/64

According to Wikipedia:
“Mancini was born in Rome and showed precocious ability as an artist. At the age of twelve, he was admitted to the Institute of Fine Arts in Naples, where he studied under Domenico Morelli (1823–1901), a painter of historical scenes who favored dramatic chiaroscuro and vigorous brushwork, and Filippo Palizzi. Mancini developed quickly under their guidance, and in 1872, he exhibited two paintings at the Paris Salon.

Mancini worked at the forefront of the Verismo movement, an indigenous Italian response to 19th-century Realist aesthetics. His usual subjects included children of the poor, juvenile circus performers, and musicians he observed in the streets of Naples. His portrait of a young acrobat in Il Saltimbanco (1877–78) captures the fragility of the boy whose impoverished childhood is spent entertaining pedestrian crowds.

While in Paris in the 1870s, Mancini met the Impressionist painters Edgar Degas and Édouard Manet. He became friends with John Singer Sargent, who famously pronounced him to be the greatest living painter. His mature works show a brightened palette with a striking impasto technique on canvas and a bold command of pastels on paper.”

Thanks for the very credible suggestion, Marcie. To me, the portrait of Corsi doesn't look like the work of a British artist, but it does show the influence of artists like Legros and Sargent. The 'Portrait of a Man' by Antonio Mancini has clear similarities to the 'Portrait of a Musician', both in style and in subject (and even in the accorded titles of the two pictures). It would be interesting to learn if both pictures are on similar supports. The same canvas maker, and the same type of frame and stretcher would further support an attribution to the same artist.

Just to clarify Corsi was an actor , not a musician. He is not the almost contemporary Antono Pini - Corsi [1859-1918], a famous baritone.
Philadelphia Museum of Art had a Mancini exhibition with a catalogue by Ulrich W Hiesinger published by Yale University Press in 2007

Like the early attribution to Rossetti, the "Portrait of a Musician" title would also appear to be incorrect. At the time the picture was painted, Corsi was working as an artists' model. His career as a silent film actor came much later in life.

There is an article on Mancini in England in Storia dell'Arte, 2012, pp, 153-80
He had a London exhibition in 1927 at the Claridge Gallery , when Graves was still forming his collection.

can the Museum direct us to images of Corsi?

There are a number of images of Antonio Corsi online. I've attached a few below, although in each instance he is considerably older than he appears in the oil portrait study. Most, if not all of the photographs are from an archive of material that has been referenced by the makers of a documentary about Corsi: https://mainspringnarrative.org/corsi

Plainly not the work of Rossetti, despite the somewhat flamboyant appearance of the sitter. I don't think it is Mancini For four reasons- the brushstrokes are not crisp enough. Th contrast of light and shade on the face is less marked than Mancini would have done in a dramatic portrait, the background is a single colour with ne detail of interior, Mancini would have put a bright highlight into the eye.
So I am looking for an artist who could have painted Corsi, and whose manner of laying on the paint was extremely flexible, even within the scope of one small broad portrait.
Having looked at a number of possibilities, I believe that we are looking at a work by Degas.
https://picryl.com/media/portrait-of-the-art-critic-durand-greville-edgar-degas-nationalmuseum-23388-8df11f?zoom=true
https://useum.org/artwork/Portrait-of-Lorenzo-Pagans-Edgar-Degas-1882
https://www.pinterest.co.uk/pin/431923420502575720/

I am wondering if anyone else noted all the text running down the right side of the painting. Can anyone decipher it?

In my mind, it might bolster my view that the mystery painting is by Mancini. He often signed in red lettering and added text. A 2008 New York Times on a Mancini exhibition in Philedelphia stated:
“In the last painting in the show, made in 1929, Mancini’s mutterings break out onto the canvas. He portrays himself sitting calmly on one half of the raw canvas, a white-haired gentleman in a white suit whose hand is raised, as if holding a brush. Across the other half, scribbled in bright red paint, he gives voice to his passion for painting and the people and places he has known: “Gérôme,” “London Sargent Dublin,” “Family,” “Degas pastels seen in his studio,” “Ballerinas,” “Lady Gregory.” “

Perhaps if he was a Degas fan, he might have produced a similar painting.

If we are clear that this portrait does indeed depict Antonio Corsi (1868-1924), then we should be considering his life and the artists to whom he is known to have been linked.

Another approach would be thru' Graves, whose collection was very mixed.

A third approach would be through images of the picture's frame and the canvas reverse which might allow one to narrow the range of countries in which the portrait may have been painted.

At the moment we do not seem to have enough to go on.

Enlarge the photo on your cellphone, Jacob, and look beside the lower section of white tie. There are very large letters and numbers there. Higher up, there are words to the right of the brownish patch of hair in a brownish-yellow patch. Even at the bottom right of the painting there are large letters in a brownish-yellow patch that might even spell Degas.

This is a rather rough canvas. It is the grain of the canvas that is giving the impression of something there when sadly it is not. No letters, no numbers. This grain is visible elsewhere, e.g. in the hair.

Assuming this is Corsi, he looks like a very young man, meaning late 1880s to early 1890s. Where was he then, and working for whom?

This may be by someone who was not primarily a portrait painter.

Scott, further to Marcie's suggested artist and your question: 'It would be interesting to learn if both pictures are on similar supports. The same canvas maker, and the same type of frame and stretcher would further support an attribution to the same artist.' I have asked the Collection. David

My experience tells me this is not by Antonio Mancini, still less the painting Marcie Doran mentions. His work is not easy to decipher or define, in all its phases, but generally speaking it is more exuberant than either of these. Being a protegé of Sargent's, it is possible that Mancini came into contact with Antonio Corsi, especially when he was in Great Britain, in 1901-1902 and 1907-1908.. However, there is no mention of him in the recent catalogue raisonné by Cinzia Virno, and nothing in the catalogue really looks comparable to this. Personally, I think we're barking up the wrong tree.
I agree with Jacob Simon: some useful information might emerge from further examination of Antonio Corsi's contacts around 1910. If he was born in 1868, and I should say this is the portrait of a forty-year old, that would surely be a reasonable date for its execution.
From what I can make of the image, the tones do not look Italian.

Are we going to be able to make progress on this discussion in the absence of further input from the collection? Or has the time come to close it, on the basis that the sitter is very probably Antonio Corsi (1868-1924) and the artist unknown?

Since no more information about Corsi's contacts around 1910 has been forthcoming, I think we could close this on the basis Jacob suggests, if the other group leaders agree.

I agree to closure on the basis of Jacob’s proposal. The sitter is almost certainly Antonio Corsi but it seems unlikely that the artist will be identified.

Could you provide a higher resolution picture? I have a strong suspicion on who the artist is, but I need to compare very subtle details such as brush strokes and lines. That can be done only with a less-grainy picture. If my suspicion is confirmed, I could then share my thoughts. Please let me know if a Larger picture is available.

I’m looking forward to your suggestion as to artist, César.

I have been having trouble posting attachments. Here are the articles again.

Marcie's post from Sheffield newspapers record the old attribution to Rossetti, which is now discredited. Freeman's Journal mantions a painting with a different provenance, so not our picture.

Cesar is welcome to advance his thoughts as to the artist but the idea of obtaining additional photos of the picture, advanced some time ago, has not proved possible. Hence the recent recommendation (2 September) to close the discussion. We now have one group leaders' agreement to this but the other is apparently outstanding.

Title
Portrait of a Musician